Alternative Thinking: Presenting A Different View of the World

A Conversation on Aesthetics between Lynn Marshall-Linnemeier and D. Patton White

Patton:  Social dance can be many different kinds of dance such as rhumba, samba, swing, but socializing also plays an important role.

L:  Of course, like most people when I think of “dance”, I think of ballet.

P:  Ballet typically is the first thing that people think about. But I view it more as an insanely unjust form of dance—rife with racism. The whole being, the structure is about oppression in so many ways—class, women and audiences because of predominance, it encourages people to become their own oppressors as well.

L:  This takes me back to my childhood. I grew up in a small town, Southern Pines, NC, in central North Carolina—a golf resort. I’d always wanted to be a dancer—a ballerina. There’s the little girl aesthetic of the ballerina in a tutu and the pointed shoes. I discovered a book in the school library that showed the different positions and practiced them almost every day. But I was not allowed to take dance because of the southern caste system and segregation.

But in 1994 I received a fellowship from Lila Wallace/Reader’s Digest Arts International to go to Australia—to work with the Aboriginal people. On one trip I was taken into the desert for a women’s gathering. There were many people there camped out, and some had come down from the Northern Territories. At one point the women informed me that they were going to do a traditional dance (“women’s business”), and they sent the kids out to survey the surroundings to make sure that there were no men around. Nora, the lady who was leading the dance grabbed my hand and pulled me into the dance. I started to cry, and I told them when I was a little girl I wasn’t allowed to take dance and the reason why.

But the healing part was that I got to dance with the Aboriginal people of Australia and that kind of dance may very well have been around for 40,000 years. I didn’t look at ballet the same way after that. It was no longer the grand dame of dance. Aesthetically, I think that the aboriginal dance was more meaningful. I understood the land and the creatures who live there because a part of the dance was about sustenance and mimicking the animals who live there. The animals are sustenance.

P:  It is rare that I find a ballet choreographer that I like. George Balanchine is one, and I like his creative process because he focused on the people that he had to work with at the time. One of his first ballets in America was Serenade, where the different movements were created by working with the people that came to the studio on any one day. If there were 3 people there that day, he would choreograph for three people. The music and visualization were all a part of this creative process.

So what kind of work do you do? Aesthetically where are you in your work? 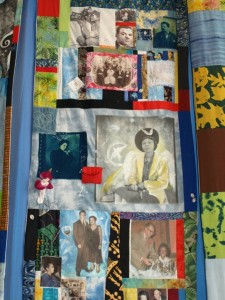 L:  I am a mixed media artist so my work is informed by a variety of media. A lot of the work that I do is construction with found objects. I basically start a piece and then look around for things to fill the space. Looking for things can of course extend beyond the studio. Scale varies. Right now I’m doing a lot of sewing. I am printing photographs on cloth, which is a non-traditional way of using the photograph. I am currently working on a commission for Fulton County for the Wolf Creek Library in College Park. This will contain a steel sculpture, a mixed media fabric construction that contains photographs of the ancestors of people in the South Fulton community, and photography by teens by the area. The artwork is a collaborative effort, intergenerational, and interactive.

P:  I’ve spent the past several days working on a GCA [Georgia Council for the Arts] grant application. I’ve been reviewing the comments that were made last year because we did not receive funding. The system seems to privilege art forms that reflect the dominant culture—mainstream—because of how the panels are composed, themselves. They basically represent that point of view. So I have to ask: what goal do you set when you are creating a work of art for institutions and how do we measure quality?

L:  Fame and quality—being in the right place at the right time. When you go against the mainstream, you are seen as ‘unorthodox’ and when you start to talk about and express yourself from a different set of measures organizations start to shut the door. Artists within ROOTS tend to be about thinking outside the box. Many question: how do we think freely about creativity? How do we move outside the boundaries of orthodoxy to create a truly creative environment for artists? Oftentimes the art has to come from underground—beneath the surface. We ask: what is the value of working with people—communicating with people, to change people’s minds?

P:  Yes. How do you define quality? I mean my dance company encourages freedom of expression, that everyone can participate. Quality is a part of the process in itself. How we go about interacting with community, to encourage creative expression. Quality is also about integrity and I have to ask how do we agree on how to measure good quality and bad quality and where do aesthetics stop and taste begins?

L:  What do you mean by taste? When I think of taste, I think of class and how taste is used as a vehicle to alienate and segregate the upper class from the other.

What are my own aesthetic choices? I get inspiration from other artists, architects, musicians, theatre, directors, designers. They all inform our personal aesthetics. I love social dance because it is about allowing every person to find the dancer within. There is a framework. Everybody can do it, and they can continue to do it once they leave.

L:  Yes.  How might I be able to help communities heal—the art as a vehicle to heal—to heal from the tragic South and its history (especially since I’m seeing more confrontation from the Republican Party)?  How can people be allowed to express themselves about their own personal histories, yet respect the personal histories of others? That’s where WE come in. We challenge the notions that threaten free thought, the freedom to have a personal aesthetic. It’s the artists who do this, we are more often than not the alternative thinkers and presenting an alternative view of the world.

So do you think that artists are special?

P:  What makes us so special is the fact that we do it. But it’s a two-edged sword in many ways. I don’t think that I’m special, but being aware to constantly remain open, having a certain level of confidence and desire to express myself, that’s a big responsibility. Viewing ourselves as part of the whole world is important. We tend to be less focused on product and more on process. The dominant culture focuses our attention on product as opposed to process. Then there is the time and resource factor. I can produce a work of higher quality if I have the time and resources that allow me to more fully develop an idea.

Lynn Marshall-Linnemeier is a Visual Mythologist, a Creator of Things. Her work is deeply rooted in public collaborations, where she creates large-scale textile based sculptures and installations, and assemblage works. thejourneyprojects.com

D. Patton White has worked as a performing artist since 1987. He has danced with numerous companies in the metro Atlanta area, and has been with CORE since 1992. He has served as the Artistic/Administrative Director of Beacon Dance, based in Decatur, GA, since 1990. He has taught on the faculty of Agnes Scott College in Decatur, GA, and is currently on the faculty of Emory University in Atlanta, GA. White has toured nationally and internationally as a performer, and his choreography has been performed by numerous companies throughout the US. He has been a member of Alternate ROOTS since 1997, and has trained extensively in the realm of community-engagement and social change through art making.