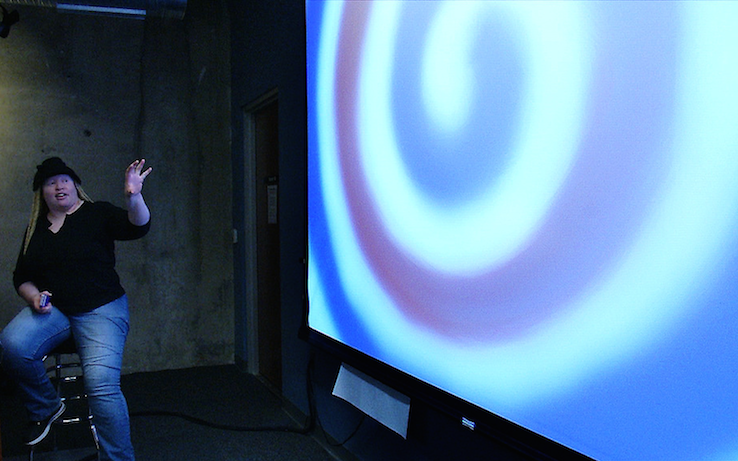 From June 8-July 3, 2015, Alternate ROOTS will launch our first-ever Artability campaign on Indiegogo, raising funds to support scholarships for differently abled artists to attend ROOTS Week. In anticipation of the campaign, Nikki Brown spoke with Elizabeth Labbe-Webb, the Executive Director of VSA Arts of Georgia, Inc. and Camille Shafer, founder of Azule and the ROOTS member who has funded the Artability Scholarship for the last decade.

Nikki: Camille, you started the Artability Scholarship for Alternate ROOTS and I’d like you to talk about how you started it and why it was important to you. 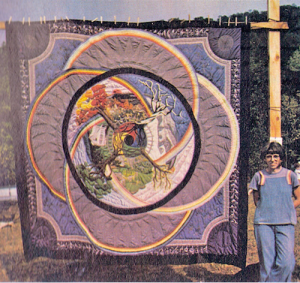 Camille: I don’t consider myself a disabled person that much. Because it happened [I lost my arm] when I was two years old and I don’t know any other life. But Dave, my husband, had multiple sclerosis and used a wheelchair. He was a musician, a photographer and he was also a very great guy. I learned so much from him. He lost the ability to make a living, but he did continue to have a life — a life that enriched me and all the people that knew him.

Nikki: And how long ago did you start the scholarship?

Camille: I started coming to Alternate ROOTS in 2001 when the camp was not accessible. In 2002, I was starting to talk a lot about you know, there is also oppression for people with disabilities and we should help that. And I didn’t see that things were improving and so I thought, “Okay the best thing is just to put my money where my mouth is.”

And the first year there was a scholarship, nobody took advantage of it. It really showed that there was a difficulty to go and approach people with disabilities and also, the people with disabilities were probably wondering what they would do in this organization. They asked me what to do and I said, “Well, keep that money and continue it and now instead of two people, you’ve got four people to bring.” The second year only one person came. So then it multiplied again, and then finally, there was some that came.

I had to stop because I didn’t have enough money and I’m still supporting Azule, and I was very sad about this. But in another way I thought also that it’s good — that the organization should take the responsibility themselves to make that happen.

Nikki: Having a disability and low income often go hand in hand, because making the accommodations for a disability is already a financial hardship. In some ways, that really makes it difficult to access the arts as far as buying supplies to participate in creating art and being able to afford to go see art. What are your thoughts on that? 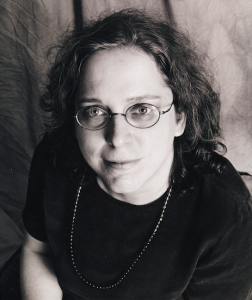 Elizabeth: You are right that disability status and very low income often go hand in hand. The current statistic for employment of people with disabilities is 65-75% of the population that wants to work is unemployed. So some of it is money, some of it is transportation. Some of it is, they don’t really want to put the effort, the time, the money into it if they’re unsure of the physical access, of the programmatic access. It all kind of comes together for a perfect storm. You make it so difficult that even if you have the inclination or the socialization — your parents were fortunate enough to expose you to the arts — it’s so darn difficult that sometimes it’s just easier to hang out on the couch and watch TV.

Nikki: From the perspective of a differently-abled artist, how would you like people to interact with you and your work?

Camille: As a human being. And I do hope that my work stands for itself and I hope that people can look at it just as a normal person.  I really don’t like when people say, “Oh this is a very good painting, you mean you hold your brushes with your mouth?”

Elizabeth: I’m standing right next to Camille — it’s just about the art. What’s different is that some of us approach it possibly differently than someone else would. It’s about the art first, it’s about the artist, and the status of the person with the disability or some other thing that holds them back, is secondary. It informs your work — you can’t divorce yourself from it — but it’s not what your artwork is about.

Nikki: I thoroughly agree with that. For anybody who creates art, it’s a series of adaptations and modifications. And the art should stand alone and it should go on it’s own merit and not be special because you are a person with a disability but because you are amazing. That leads us into my next question: Elizabeth, how does VSA Arts work to show off the art of the artists in a way that’s not patronizing but that’s reflective of the art and the skill that’s involved in creating the artwork?

Elizabeth: Well the first thing that we do is we use very similar or the same metrics for assessing artworks as any other organization would use. What’s different is that we understand the supports that may be necessary for their success.

Nikki: If I understand correctly, you also make shows accessible to people with disabilities, correct?

Elizabeth: Yes, and/or we work with other organizations so they can learn how to do that. Some of it is, “what does the ADA mean? How do I make that a reality in my space?” Very practical advice. Some of it is more cultural. Does the language that you use in your marketing alienate certain segments of the population? Some of it is getting organizations more comfortable with welcoming patrons that might have intellectual disabilities or something that is unfamiliar to a docent or to a gallery owner or a theater. So some of it is teaching, some of it is helping to shift culture, some of it is marketing advice.

And yet, 25 years into ADA and community building and integration, people still have an idea that the underserved populations they are trying to reach, they have an idea that it’s a separate thing. And a lot of our work goes into ideological change, cultural change, to get people to understand that it’s not separate. These are mothers, fathers, brothers, sisters, daughters, sons. And when you reach into the community, you reach for everybody.

Nikki: I think this is something that in some ways we [Camille and I] have been trying to express for a while within organizations that we work in. How are we inclusive? Why do we end up in our own special corner rather than feeling like we are truly part of the community? So having said that, I also want us to look at, what is the vision? In our perfect world, what does art accessibility really look like to us?

Elizabeth: Well our tagline — and the tagline kind of grows every year as we learn — our tagline is, “All the arts, for all the people, all the time. Where they want, when they want, and with whom they want.” You know, and I think, there’s no such thing as a perfect vision, but to us and to me, I think that [tagline] talks about community: everybody, when they want, and with whom they want. And if we can do that, if we can level the playing field or ramp it, then we’ve created that space where art access is just the way you do business. And that’s the act of community building: it’s about the work of ensuring that people feel safe and welcome and the arts just happens to be the way we get there.

Camille: The arts is a way to break up the isolation. The ability people on the one side and the people with a disability on the other side and they live separately — I don’t think that’s right. So, I come to it in that sense. I come at it as a two-way exchange. I wouldn’t be the person that I am without Dave and neither, without ROOTS.  I hope there is a place for people differently abled to challenge me and the world around me. And I would say that Jaehn Clare, Nikki, Amanda — to just name a few — have deepened my world. I also want the lives of people who are able to be enriched and really start to see a society that is more just. That is more accessible not just for the wheelchair, but accessible human to human being. To break the isolation. We have to learn so much.

Nikki: I love and agree with both those aspects — it is about that two way exchange. You don’t build a community without interaction with each other and exchanging ideas and thoughts and processes, and, you know, culture, with each other. We need to do more to build that bridge, that openness towards these exchanges of culture and ideas and processes. My hope would be that we just continue to build the bridge.