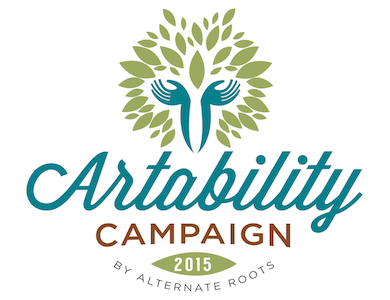 This is the second of our four-part Artability Artist Spotlight series that highlights differently-abled artists and runs throughout Alternate ROOTS’ Artability campaign. Artability provides scholarships for artists with disabilities to attend ROOTS Week. To read the first spotlight, featuring Camille Shafer, click here. To learn more about, or donate to, the Artability campaign, visit our Indiegogo page.

“As a disabled performing artist I have found a great and supportive family at Alternate ROOTS who inspires me to continue my creative soul. Every year I look forward to ROOTS Week to be re-inspired by many colleagues and friends.”

Samuel Valdez is a playwright, director, and performer. The son of Mexican immigrants, he was born in Riverside, CA and currently lives in Tijuana, Mexico. Samuel graduated with a B.A. in theater from San Diego State University in 1991, with an emphasis on directing. In the decade following college, Samuel directed a large number of Latina/o plays, including: Roosters by Milcha Sanchez Scott, The Conduct of Life by Maria Irene Fornes, and The Guitarron by Lynne Alvarez. While in college, Samuel got his start as a playwright; he has authored seven plays since and directed and produced several of them: Soy Yo/It’s Me, P-13-VIVE, Ambos/Both (co-directed with Dora Arreola), and most recently Outside the Circle, written and performed in collaboration with Andrea Assaf and directed by Dora Arreola.

Outside the Circle from Art2Action on Vimeo.

His most recent project, And He Became a Man, is a one-man show exploring masculinity and the ways that he, as a Latino man with a cerebral palsy, fits into it. Asking, “what is a man?” Manuel, the main character, takes the audience on his personal journey through migration, family, fieldwork, alcoholism, abuse, rivalry, and loss — all from his perspective as a Latino immigrant with a disability. Combining music, dance, movement, and video, Manuel looks into the past in order to figure out the future.

And He Became a Man will be performed during the Latino Teatro Festival, June 25-28, 2015 at the Tenth Avenue Arts Center in San Diego, CA.

An Excerpt from And He Became a Man:
Copyright, Samuel Valdez. Use prohibited without author’s permission. 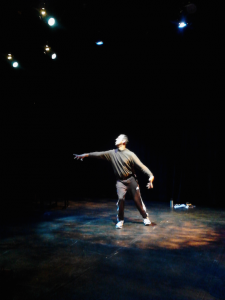 MANUEL: My stomach is growling as though a storm of waves were clashing against each other. My teeth are clasped together as animals grasp on to their prey. My eyes are looking straight out as though I was blind. Blinded by anger because I am sitting here doing nothing not giving myself the opportunity to be successful cuz I’m afraid to stand up for what I believe. I try to better my life but there is always a downfall sticking me back in the same damn hole.

I am tired of people always giving me bread crumbs because I am don’t fit into their “normal” little perfect fantasy world. They pity me just because I look different without taking the opportunity to find out who I really am. I am tired of those guys who call me gay, el mariquita, not showing any respect for me as a capable man, just so they can feel better about themselves. Then saying,

CHORUS: I’m only joking to pass time. You understand right?

MANUEL: NO! I don’t understand why I am always being tangled in your endless web with no way out! How can I be a real man when I am bullied by my own sex? How can I have faith when all doors are shut in my face and walls are built with no way to climb over them? Where is the hope when it’s taken away from me in the most brutal way with a sneer, a laughter, or just a look of “who do you think you are?” How can I be free when I’m trapped in a world that doesn’t understand me no matter how much it tries too? Can someone explain to me who is a real man because the only men I see are bullies, abusers, rapists, and fucking MACHOS, which I don’t know what the hell that means?

Is a real man he who stays quiet all the time taking in all comments and observing everything that is going on without saying a word?

Is a real man he who is lazy and never wants to work, expecting everyone to serve him on a golden platter?

Is a real man he who thinks his shit don’t stink while trying, and I repeat trying, to act humble so people think he’s a thoughtful person?

Is a real man he who has a beer or glass of liquor in his hand demanding to be treated as a king?

Is a real man he who thinks the word macho means controlling everything and everyone by putting them down mentally, sexually, and physically while he talks wonders of himself?

Is a real man he who is only looking to calm his sexual needs by luring in that innocent girl who loves him, leaving a child in her hands, not wanting to take full responsibility for his actions? And still calling her a puta because she got pregnant.

Is a real man he who comes home late, drunk, two to three hours after work, demanding a hot plate on the table… And after eating beats his wife because he did not like the way he was treated? Then expecting her to still serve him in bed?

Is a real man he who sexually abuses his own offspring just for the pleasure of feeling relieved, leaving them traumatized for life? Ripping away the most valuable thing that child has, the innocence, the self-pride.

Is a real man he who goes out and kills people just for the sake of power?