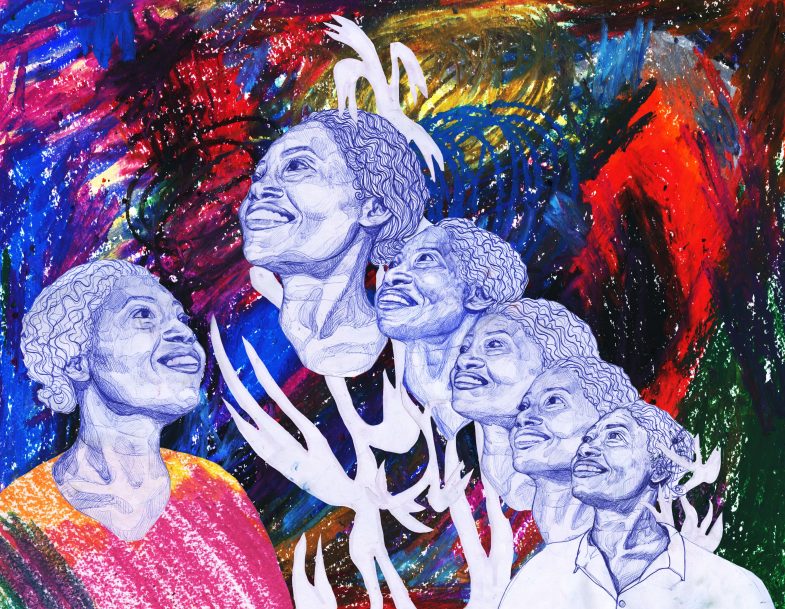 This year’s ROOTS artwork is a tribute to the Southern sculptor, artist, and educator Augusta Savage born in 1892 in Green Cove Springs near Jacksonville, Florida. Although I’ve grown up in Asheville, NC, I was born in Jacksonville, FL too. Savage began sculpting as a young girl with the red clay she found in the riverbanks and beneath the soil of her homeplace in Clay County. As a child, her art making was punished by her father, a minister who strongly believed that her sculpted images were ungodly. Despite this, she graduated from Cooper Union in New York and grew into a masterful sculptor and arts educator.

The composition of this work is inspired by Savage’s piece titled, “Lift Every Voice and Sing,” referencing Jacksonville native James Weldon Johnson’s famous poem turned national anthem. The piece is most often known as “The Harp” since she was forced to change its name for the 1939 World’s Fair in New York. I created this image in honor of the ROOTS theme, RE/NEW, and in remembrance of Augusta Savage. As her work has done for me, I hope that we may feel the visions of our ancestors on the back of our heads and necks, lifting us up in their warmth, allowing us to continue forward with more insight and clarity. Her legacy as a black woman artist during the Harlem Renaissance must be remembered, like Zora Neale Hurston’s has, as we continue to do the work to recuperate the many artists and cultural wizards whose memory we’ve lost to the past.

Liana Rhapsody Ambrose Murray is a visual artist raised in Asheville, NC with roots in Northern/Central Florida. She is the daughter of Tamiko Ambrose and the granddaughter of Pamela DeNeuve and Sherry Lagergren Murray. She graduated from Yale University this year as an African-American Studies Major and is the first artist-in-residence at the Mississippi Center for Cultural Production in Utica, MS. She has been working as a member of the YOOTS team to bring more young people to ROOTS.