Buildings, Community, Art, and Building Community: Fetching Lessons from the Past 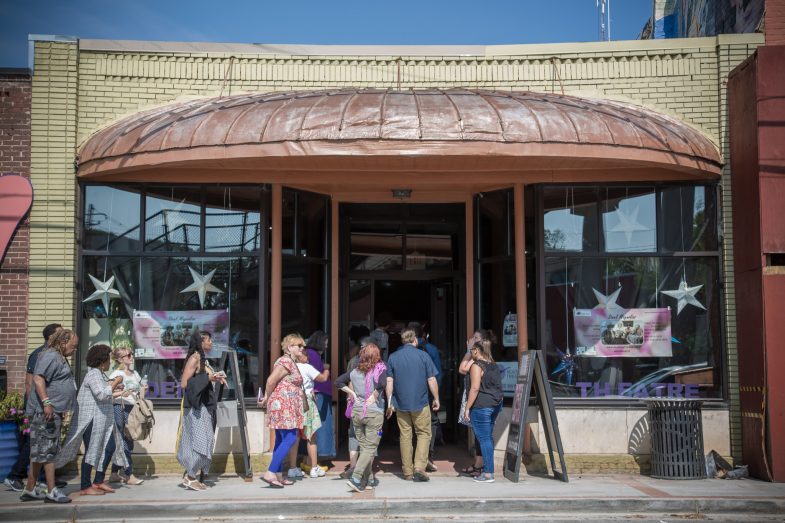 The Hapeville Performing Arts Center was one of several stops on the Grassroots Arts Bus Tour during ROOTS Weekend-Atlanta. Photo: Melisa Cardona.

“I came away inspired. It completely transformed my vision of the possibilities of grassroots art.”

Those are the words of Josephine Kelly, Mainstreet Director of Porterdale, Georgia, a town of 3,500 east of Atlanta. Josephine was one of the forty or so artists and organizers who boarded a bus to tour arts facilities and sites from Atlanta’s past and present.

The day was a highlight of ROOTS Weekend-Atlanta, themed “Creating Place: The Art of Equitable Community Building.” 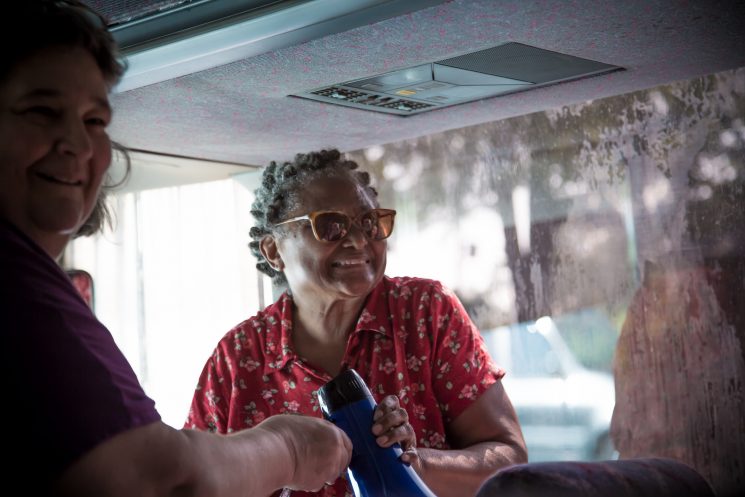 Poet, activist, former executive director of Alternate ROOTS, and founder and current president of The Arts Exchange Alice Lovelace drew on her long history in Atlanta to plan and moderate the excursion she titled, “A Sankofa Journey: Atlanta Grassroots Arts Bus Tour.” Alice wrote, “The literal translation of the word and the symbol ‘Sankofa’ (from the Akan) is ‘it is not taboo to fetch what is at risk of being left behind.’” Going back to grab history and carry it and its lessons forward were a thread running through the whole of the ROOTS Weekend-Atlanta.

Alice set the start at an old Atlanta Public High School: the future home of WonderRoot, a ROOTS partner for the weekend. At present, WonderRoot lives down the street in a converted house bursting at the seams with programs and facilities for art making, organizing, and education. At the end of the tour, Wonderroot gave Riders the chance to visit their Activist Screen Printing Studio to make their own poster.

WonderRoot’s move will be the next in a decades-old Atlanta tradition of repurposing de-commissioned public schools. WonderRoot is raising the funds to buy and remodel the building, the old “Tech High School,” thus avoiding the oft-told story of artists being tossed out of spaces they’ve poured their hearts and souls and the content of their wallets into.

A later stop, “The Workroom,” provided an example of a different variety of conversion. It operates in the Wagon Works, a mill built in 1895, adapted to office space for the U.S. Army in the 1980s. It’s located in East Point, a city just west of Atlanta. The production company “The Lucky Penny” curates a group of choreographers and performers who create, rehearse, and present work at The Workroom. The Lucky Penny has successfully gathered a large and deeply engaged community of artists and audience members who volunteer, stage, and witness new and challenging works of movement art.

Culture of a Community

In Hapeville, just across the southern border of Atlanta, the tour stopped at the Hapeville Performing Arts Center, which has played a big part in rejuvenating the center of town. Side by side with shops, businesses, and restaurants, the HPAC and its neighboring buildings occupy a walkable, human-scaled city center. Impact Theater and the 61-year-old Academy Theater keep the seats filled at the HPAC. Academy staff and board attend to the wishes of their audience in planning productions and seasons in order to be a real part of their community.

The tour broke for lunch in Historic West End, a residential and commercial part of Atlanta that includes the campus of the historically black Atlanta University Center. Tour group members could choose to visit the West End Performing Arts Center, the Hammonds House Museum for African American Art, and the bookstore of the Shrine of the Black Madonna.

When Government, Artists, and Neighborhoods Work Together

The Neighborhood Arts Center and The Arts Exchange

The philosophical heart of the tour was found in Abernathy City Park in Mechanicsville community, just southwest of downtown Atlanta, where the Neighborhood Art Center (NAC) once stood. From 1975 to 1984 artists had studios, taught classes, and called national gatherings of the most significant black artists of the time. Another example of a repurposed public school building, the NAC was a true center for the neighborhood too. Children attended art lessons, community groups had meetings, and there was even a daycare center on the ground floor.

Maynard Jackson, Atlanta’s first African American mayor, through his Ad Hoc Committee on the Arts, instigated the founding of the NAC. When it opened – in a decommissioned school for a lease of $1 a year – it boasted a staff of about a dozen, including no fewer than ten artists in residence, funded by the Carter-era Comprehensive Employment and Training Act (CETA), a federal program.

Photographer Jim Alexander met the tour at the site. Jim describes himself as a “participant artist.” He has enjoyed a long and varied career in photography (*see his bio below) including being on staff at the NAC. He, Michael Simanga (one-time director at the NAC), patron and activist Alvin Dollar, and Alice Lovelace (who’d also been NAC staff) shared memories and emphasized the connection between social activism of the time and the NAC and its artists.

A generation of artists and arts organizations emerged from the halls and classrooms of the NAC. Some of the better-known ones include actors Samuel L. Jackson, Bill Nunn, Georgia Allen, jazz legend Ojeda Penn, Jim Alexander himself, and author Toni Cade Bambara. 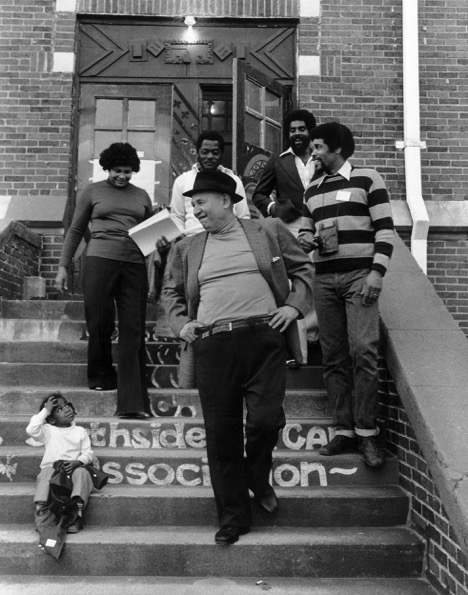 A direct legacy of the NAC is The Arts Exchange. Many of the artists and community members who’d been active at the NAC worked with the organization, where for more than 30 years – in another adaptive use of a school building – The Arts Exchange created a nexus of cultural activity in southeast Atlanta.

Like WonderRoot, The Arts Exchange understood the need to control their fate and purchased their building years ago. In July, the Arts Exchange finalized the sale of the seriously aging building and the purchase of another old school, and had sufficient funds to completely renovate its new facility in East Point.

Our tour drove past the in-process new Arts Exchange. It’s in a neighborhood where it will inevitably serve families, seniors, artists, and organizers.

At the site of the NAC, Jim Alexander showed a poster-sized photo, shot on the steps of the NAC. A smiling group is descending and a child, sitting on the steps, looks up at them. At the center a tall man in a dark hat smiles down at the inquisitive child.

The man is Romare Bearden, and the child was the daughter of the director of the daycare center at the NAC.

There’s a plan afoot to purchase that photo from Jim and hang it at the new Arts Exchange. It will be a great chance for people to hear the story of the NAC and reflect on how the present reflects that time. 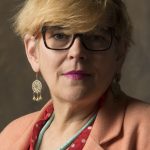 Priscilla Smith first attended Alternate ROOTS’ annual meeting in 1982. A lifelong Atlantan, she is a performing artist, producer, and activist. Her current project “The Real Donna J. Trump” has a broad presence on the internet and at public events throughout the Southeast and beyond.

*Jim Alexander (American, b. 1935) is an award winning documentary photographer who has spent over fifty years refining what he calls the art of documentary photography. A photojournalist, teacher, activist, media consultant, and entrepreneur, Alexander has amassed an impressive collection of images of black culture and human rights photographs. He received a 2017 Jus’ Blues Music Foundation Humanitarian Award for his 50 years of documenting black music. He is a 2006 inductee into The HistoryMakers and in 1995 when the city of Atlanta Office of Cultural Affairs began its annual “Master Artist” program, Jim Alexander was the first artist chosen.

Jim started taking photographs in 1952 at the age of 17 in the U.S. Navy, at a time when photography was not yet considered broadly as art. He had his first exhibit 16 years later in 1968, the same year he graduated from the New York Institute of Photography with a degree in commercial photography. It was also the same year that he met and became friends with Gordon Parks. Since that time, Alexander has had over sixty solo exhibits and taught photography at Yale University and five other colleges, was photographer in residence at Atlanta’s Neighborhood Arts Center for four years, and spent five years as photographer in residence at Clark Atlanta University. His work is in numerous major collections including the Smithsonian National Museum of American History and African American Museum, the Museum of Contemporary Art Georgia (MOCA, GA), Stuart A. Rose MARBL Collection at Emory University, Paul R. Jones Collections, CAU Galleries, AUC Library Collection, Harvey B. Gantt Center Art Collection, and the Hartsfield/Jackson Atlanta Airport Collection. There is a portfolio of fifty-five of his photographs of the Neighborhood Arts Center from the Jim Alexander Collection at the Auburn Avenue Research Library in Atlanta, on the UGA Galileo website.

Of the photograph featured in this article he says, “‘Romare at the NAC’ is one of my most popular photographs. I captured this shot as Artist Romare Bearden, along with his wife Nanette Bearden, writer Jim Lee, Kerry Price, and Artist/NAC Director John Riddle were descending the stairs, leaving the NAC after the Beardens paid a visit to the studio artists and staff in 1978. The little girl on the steps is the daughter of one of the childcare workers at the daycare center on the lower level of the facility. The visit was facilitated by Dr. Michael Lomax.”

This photograph was featured in the Romare Bearden: A Black Odyssey exhibit at the Michael C. Carlos Museum at Emory University in 2013.