CREATING PLACE WHILE BUILDING PEOPLE POWER: HOW ROOTS WEEKEND-ATLANTA INSISTED ON TRADITIONS OF PLACE AND SPIRIT 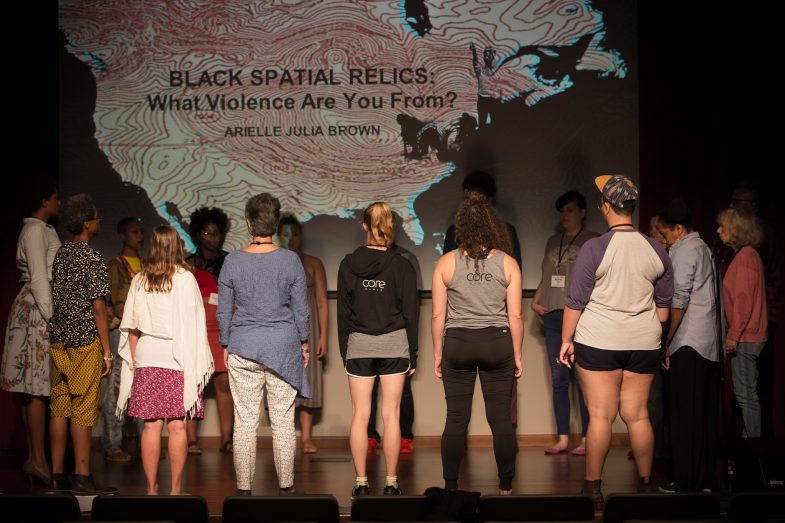 A story – an image- a recollection

Ring shout to a concrete to wall and back

The work, ideas, remnants, considerations, hollers, and affirmations repeated above stand on their feet. They have a life. They remain in the spaces where they were offered. They gather the others. They reach toward their kindred and refuse to leave. These are but a few fragments of the offerings from ROOTS Weekend-Atlanta. These offerings and the people who brought them, are in the work of gathering themselves. They are in the work of gathering their traditions – not as objects to be collected, memories to be tagged, or even oral histories to be captured – but as technologies and practices to be leveraged toward the collective freedoms of their communities.

THE QUESTIONS TO WHICH THESE VIBRATIONS POINT

These utterances from the inside of performances, workshops, exhibition, panels, and bus tours at ROOTS Weekend Atlanta offered the following questions and more, to the local, regional, and national conversations about creating place:

How can the work of creating place center people while interrogating the relationship between cultural production and capital investment?

How do we as activists and cultural workers resist placemaking efforts that, at best, can only aspire to lift the nostalgia of what a place once was?

How do we repeatedly ask of cultural work, a space to build people power? 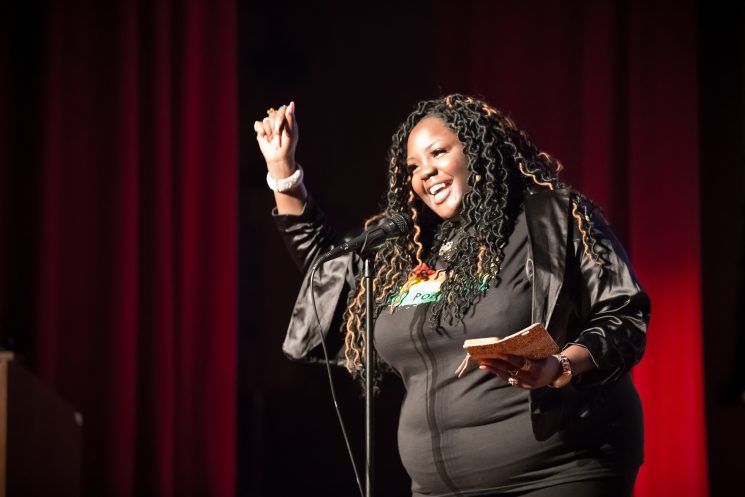 Creating Place: The Art of Equitable Community Building, was the sixth in a series of ROOTS Weekend gatherings. Based in Atlanta, the work of considering the range, scope, and impact of local and regional placemaking efforts rang resonant with local cross-sector efforts to consider the impact of mindful community building. Workshops and performances, in particular, at ROOTS Weekend-Atlanta traversed the common spaces between patterns of in-migration and out-migration in urban and rural spaces. Workshops including Afro-Brazilian Dance (Tamara Williams), Stories of Self, Home, Place, and Space (Shannon Turner), What Violence Are You From? (Arielle Julia Brown), Accessing Your Body Wisdom in Challenging Times (InterPlay Atlanta), and the Able 2 Inc. Workshop each spoke to the work of building community across tradition, movement, and narrative. ROOTS Weekend performances including those of Liza Garza and Eli Lakes, Alabama Hold On (Erin Washington), Rumble Black Girl Rumble (Anita Crethers), and the StoryMuse Open Mic each made space for a sharing of the testimonies, family histories, declarations, and affirmations upon which equitable community is founded.

ROOTS Weekend-Atlanta, through its programming, lifted the histories of land, First Peoples, and Black communities and histories that exist in closeness to both the Auburn Avenue African American Research Library and Cultural Center, and the theme of the gathering. The programming of ROOTS Weekend-Atlanta – beginning with Community that is ROOTed: A National Creative Placemaking Conversation, and weaving through an informative Atlanta BeltLine Tour, A Sankofa Journey: Atlanta Grassroots Arts Bus Tour (a revelatory tour of justice and POC centered arts spaces in Atlanta, led by Alice Lovelace), and The Art of Equitable Community Building Showcase featuring rigorous projects from throughout the Southern U.S. – collectively insisted that the work of building equitable communities is a networked framework that is in conversation with the land, multiple ecosystems, the living, the dead, and THEN institutional stakeholders across sector and economic location.

THE GATHERING AND THE TAKE HOME 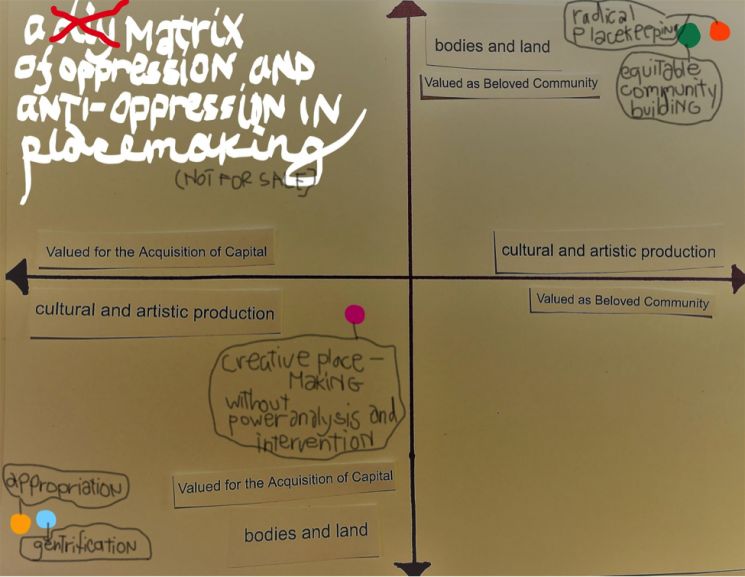 The matrix above is a notation of my personal takeaways from ROOTS Weekend-Atlanta. In the upper right quadrant, I drew the intersections of bodies and land, cultural and artistic production each valued as elements of beloved community. To its contrast, in the lower left quadrant, I drew cultural and artistic production, bodies and land as valued for the acquisition of capital. Pulling from the weight and significance of histories of place that showed up in each program, this matrix asks me to locate my efforts as a cultural worker in proximity to the traditions of beloved community and/or traditions of violence. I offer this notation because ROOTS Weekend-Atlanta served as reminder that like the expanding BeltLine and the murals of Fabian Williams in the West End, the work of building equitable communities is a self aware process that considers how multiple efforts, projects, lands, labors, and cultures are always upnext and on top of something(s) – something(s) that have resisted and persisted and something(s) that are yet to be.

At my mother’s house just outside of Southeast Atlanta, the property taxes are rising, the property value is rising, the bones of the enslaved Black folks are not far from her property line, and new development isn’t too much further than that – in land or time. Sitting on borrowed land between bones and broken ground, the efforts of Black communities of South Atlanta are like the creative remnants witnessed above. These communities are in the work of gathering themselves and their kindred – listening to the historical moments that remind us all that nothing is new – calling on the innovation of our traditions to build out their resistances and collective freedoms. ROOTS Weekend-Atlanta, in its invitation of ritual and tradition, offered a space for us to witness these movements alongside each other – passing and acknowledging, networking, conjuring, and recollecting. 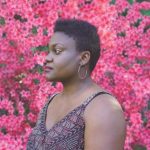 Arielle Julia Brown is a creative producer and social practice theatre artist. Arielle is the creative producer of Black Spatial Relics, a new performance residency about slavery, justice, and freedom. She served as a 2015-2017 graduate fellow with the Center for the Study of Slavery and Justice at Brown University where she holds a M.A. in Public Humanities.