Hollerin’ into the Space: Reflections on ROOTS Week 2016 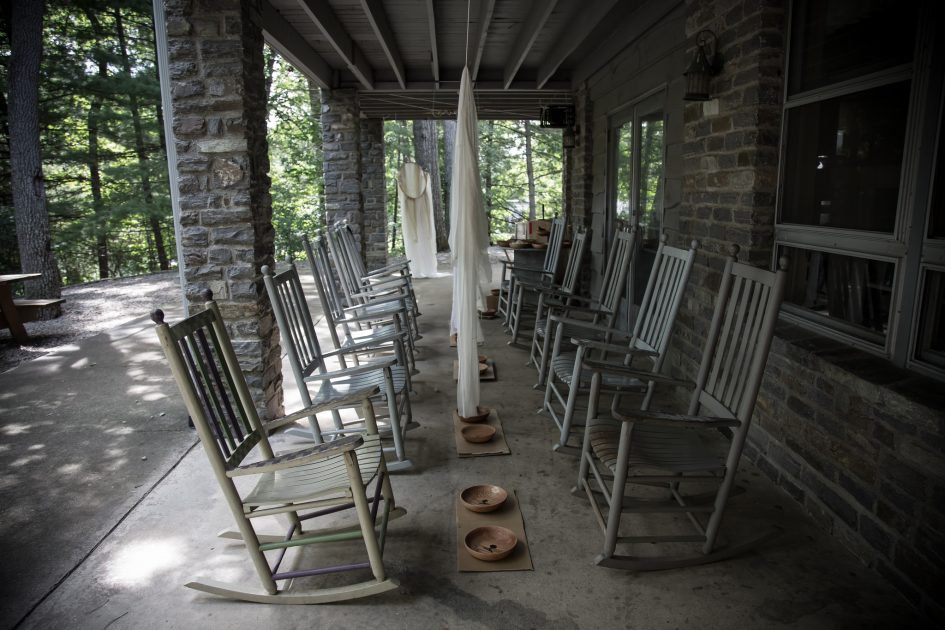 I’ve always leaned into the retreat element of ROOTS Week. Gathering with this extended family is (perhaps ironically) a time for me to turn inward and be alone, to take meandering walks through the woods, to be silent, to meditate, to sleep, to dream. ROOTS Week is also a time for me to grieve.

The last time I saw my father, Ronald Wayne Ragin, Sr., alive was just after ROOTS Week 2012, so he is always heavy on my mind when I’m at Lutheridge. In November of that year, Dad died from complications of Sickle Cell Disease. I miss him daily. He was one of my deepest advisors and teachers, and his death taught me many lessons; among them, I learned that in order to stumble through the unpredictable terrain of grief, I needed folks to lean on. So due to timing, and perhaps good fortune, ROOTS Week has been a place where I cry often, and have many friendly shoulders on which to do so. This year, that grieving space was particularly powerful.

My tears began to flow when I emerged from the dining hall Thursday evening to witness the lovely people of SpiritHouse engaged in a healing ritual and memorial for Korryn Gaines. Like many folks who witnessed that critical intervention, I was frozen in place. As the SpiritHouse family gathered around the trunk of a large, old tree, leaning into the surefirmness of its wood and roots, something unlocked in me, and some long-held cry found a little release. My wet cheeks marked the beginning of my ROOTS Week, really. Big thanks to my friends at SpiritHouse for that important and beautiful offering!

Later that night, a field holler pierced the air above the Faith Center Thursday at dusk. The recorded voice – laser-toned, bleating out its throatiest aaaawwwww – beckoned me through the drone of cicadas and tree frogs. I slowly walked up the hill toward the shadowy porch with the rows of rocking chairs and the ghostly draped fabric. I found Angela dancing-swirling with a piece of red cloth and Muthi beside the dj booth. And there, for the first time in a long time, I began to holler too. First it was a baritone yelping, then a tenor blare, then an alto moan, and then some soprano shrieking that continued until my vocal chords couldn’t make any more sound. And somewhere in that vocal trajectory, I began pacing the cement slab with my arms extended, like I was trying to fly as slowly as possible.

That space that called to me was called The Hollerin Space, and as soon I set foot there, I knew that my work during ROOTS Week was to help build and maintain it. I am so grateful to Muthi and Angela Davis Johnson for seeding that community-created installation, that coven of altars / spiritual dj booth / storytelling circle / seed bomb womb / place to honor our ancestors and to dream about the future. It’s where I turned inside out.

The next day, I spent some time reading and scrawling on the cardboard floormat/dreaming wall, where folks wrote reflections about the future of Blackness (at least as I read it) – things like, “Been here before” and “Honor your ancestors by lifting up your voice.” I grabbed a marker, rolled it a few times between my fingers, breathed deeply, and let the words find me. 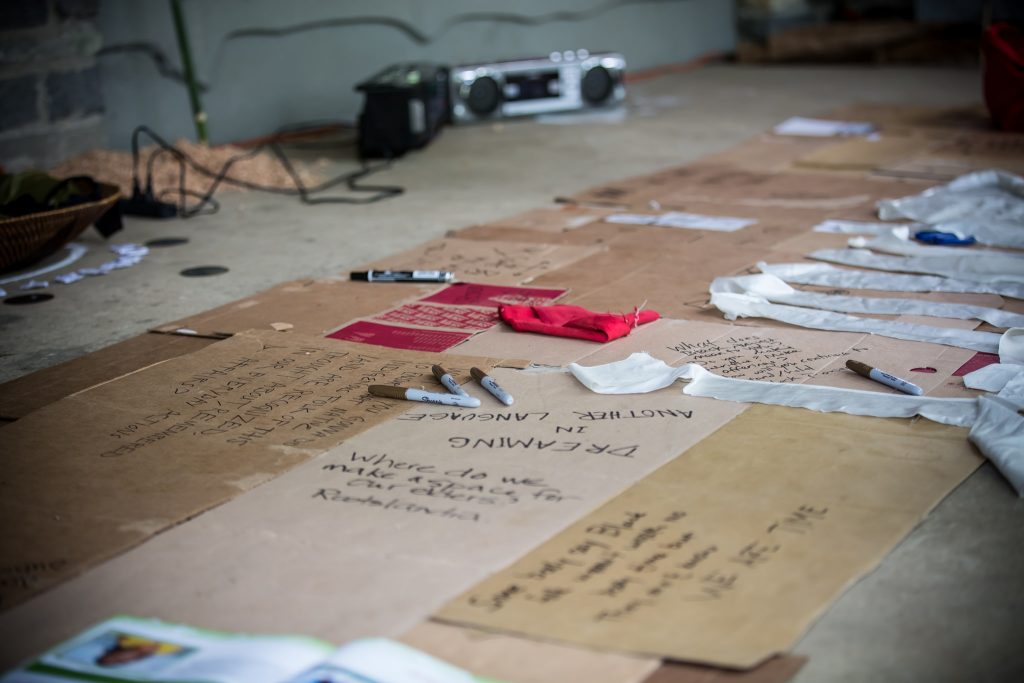 I migrated to Muthi’s spiritual dj booth, where I mixed and mashed up an array of sounds and songs: crickets chirping, drumming from a Santería ceremony, Sekou Sundiata reading one of his poems, Fela, Freedia. I wrote motherwitticisms on pieces of fabric attached to a wooden ring with which Angela later would dance down to the lake. I printed the names of ROOTS Week’s honorees on magnolia leaves in gold marker. I oriented new visitors to the space, directed them to the beautiful hand-carved bowls placed near the rocking chairs, where folks wrote love notes to honorees who have for so long given so much to the ROOTS Family.

And there I stayed for most of the weekend, in an extended and collective meditation on the past, present, and future. I cried more. I thought of my dad and other ancestors who I have and haven’t known in flesh. I watched other people dance and danced with them. We sang together. We cut fabric swatches and doodled in pastels. I saw so many beautiful folks come through and make contributions. We clearly needed this space. We needed to scream and be tender and silent and honest with our bodies and our feelings and our spirits together. And what better place to do this collective grief + dream work than at ROOTS Week? On the heels of a summer filled with so much state violence on display, in a year of loss and extreme overt racism and rabid sexism and xenophobic nationalism and ism after ism after ism on parade, I am eternally grateful for Muthi and Angela’s offering.

In my experience, it’s rare that communities come together to grieve outside of acute moments of trauma. Broadly speaking, in the U.S., we don’t have a culture of collective grief. I learned this most painfully after my father died. So many people didn’t know how to support me, so they disappeared or tried to find ways to make me feel better. But grieving has its own unpredictable rhythms, and some of the dancing we must do to shake the tears from the deepest wells needs to happen with others present. We need to stomp the ground together and that was the beauty and transformative valence of The Hollerin’ Space for me. It was a place where we collectively asked the Earth to take some of our tears from us, and she opened her wise, warm arms and said, “Come, children. I’ve been waiting.” 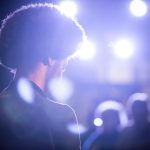 I write, sing, compose, and make interdisciplinary performance work that integrates sound, text, and movement. My creative interests include music of the African Diaspora, embodied ancestral memory, improvisational creative processes, liberation aesthetics, and the development and maintenance of spiritual technologies. I grew up in Perry, Georgia and received my musical training at the Saint James Christian Methodist Episcopal Church. I’ve had the honor of performing with brilliant souls like Amara Tabor-Smith and Grisha Coleman, studying my crafts with luminaries such as Joy Harjo and Brenda Wong Aoki, and being a soloist on Christopher Tin’s Grammy Award-winning album Calling All Dawns. I am a proud member of Alternate ROOTS. I also make a mean red velvet cake and can throw down on some biscuits.

You can learn more about me and my work at http://ronragin.com.