Inspiration: North Carolina Organizing Work During the Age of Trump 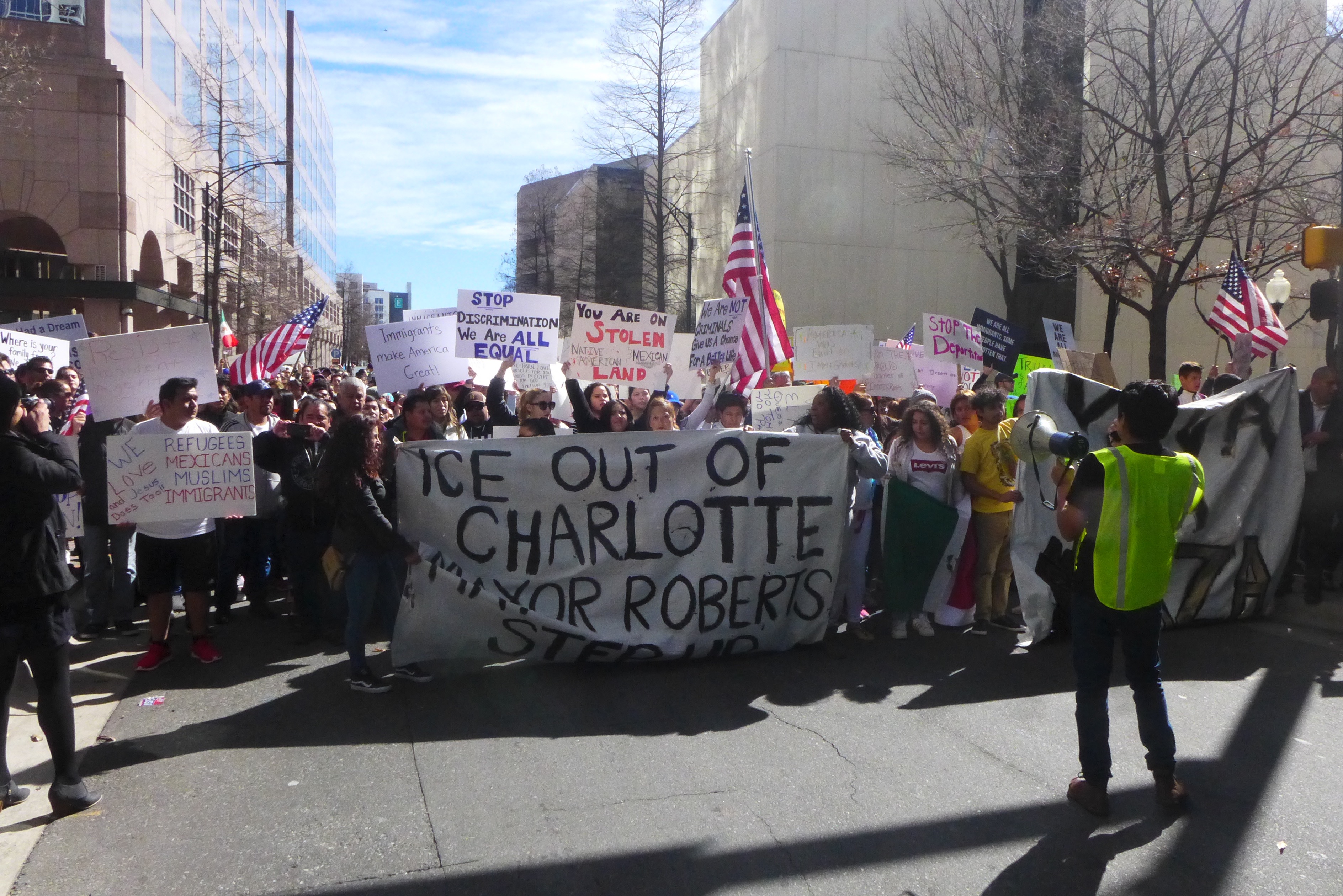 2017 has been a hell of a year – intense, grueling, and discouraging if you read the headlines. Or if you walk outside. Everywhere there are signs of White supremacy feeling emboldened – an uptick in Klan and Alt Right marches in small towns throughout the South; Trump’s threat to defund the National Endowment for the Arts and  National Endowment for Humanities in order to suppress creative disruption; unprovoked attacks against peaceful citizens who are Muslim or undocumented or Black or LGBTQ as they engage in the everdayness of life. In some parts of the Carolinas and Virginia, Confederate flags seem to be in epic heat. They mysteriously pop up over highways and in other public areas, as flag rights activists aggressively reclaim space in protest of confederate paraphernalia and monuments being removed from state properties.

And yet, we continue to organize against the people who daily plot to undermine our overall quality of life. Admittedly, the streets have been quiet since Trump took office. Years of protesting and uprising have given way to a type of quiet, determined, behind-the-scenes, deep-tissue organizing, perhaps out of fear for what might happen to us if we get arrested now that he’s in charge.

In this moment, when the headlines and our social media feeds often feel daunting and downright discouraging, it’s important to acknowledge, support, and resource the many varied acts of resistance that we each continue to mount. Here’s a short but impressive role call of resistance work happening in North Carolina and beyond. Please take these examples of and strategies for creative disruption and personal liberation, and expand upon them within your communities.

In response to the election of Donald Trump, BYP100 Durham began brainstorming about ways young Black folks could take better care of one another in order to continue the work of building a better world under a fascist regime. BYP100 Durham developed community agreements and established a practice of regularly checking in on each other as a way to deepen their connections and ensure safety for one another.

On May Day, BYP100 Durham took over city council with a guerrilla theatre disruption called the “People’s Council.” Representing working class housing, education, employment, food, health, environment, and safety concerns, “The People’s Council” voted to approve the #DurhamBeyondPolicing campaign demands, which included a halt to any expansion of the 2017 police budget. 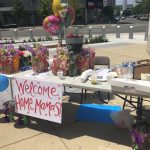 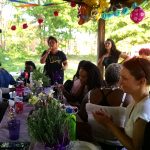 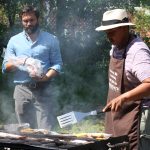 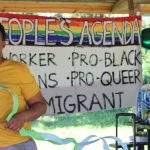 For Mother’s Day, in coalition with 25 other groups, including SONG NC, BYP100 Durham participated in the national Black Mamas Bailout. Led by the Movement for Black Lives and Color of Change, the initiative raised $400,000 to fund the bailouts for hundreds of Black mothers, a demographic which is disproportionately affected by cycles of incarceration.

According to the National Bailout site:

“Everyday an average of 700,000 people are condemned to local jails and separated from their families, a majority of them are there simply because they cannot afford to pay bail.

“Since 1980, the number of incarcerated people has grown by 500%. Fed by a racist War on Drugs, that our current Attorney General Jeff Sessions is trying to resurrect, millions of people have been taken from their families.

“Pre-trial incarceration has catastrophic impacts on our communities in particular. Black people are over two times more likely to be arrested and once arrested are twice as likely to be caged before trial. Our LBGTQ and gender nonconforming family are targeted and caged at even more alarming rates, and once in jail are significantly more likely to be sexually and physically abused. For instance, one in five transgender women have spent time in prison or jail and one in three of them reported being sexually assaulted while there.

BLACK AUGUST IN THE PARK

Taking place at Durham Central Park on Sunday, August 20th, the event commemorates Black August, which began as a solidarity and personal enrichment movement in the prisons of California during the 1970s, when Black nationalists and Black liberation fighters were being targeted, jailed, and persecuted by the state.

While some may see the Durham gathering as a mere block party or barbecue, its hosts view the event’s prioritization of Black joy and healing as revolutionary. Having attended, I concur.

The space is exclusively and intentionally Black, in order to eliminate the social pressure that many Black people feel to assimilate in order to make their White counterparts more “comfortable.” 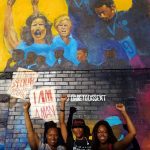 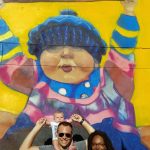 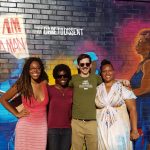 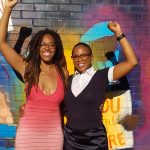 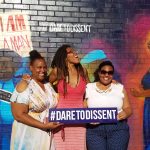 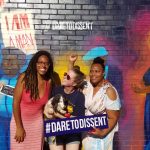 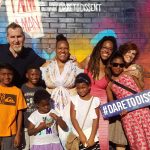 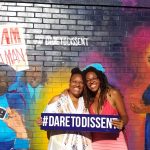 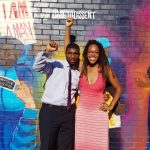 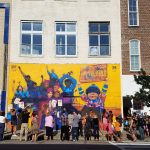 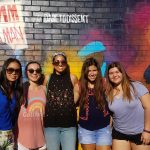 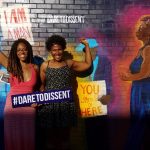 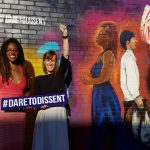 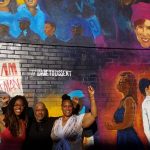 In July, the ACLU of North Carolina commissioned artist Dare Coulter to paint a protest rights mural in the heart of downtown Raleigh, along a route that is often traveled by elected state officials. The mural features images of historic protest moments – the 1968 Olympics, Standing Rock, the Women’s March, etc.

Dare, a 24-year old sculptor and painter, spent close to 10 days painting the 25’ high statement piece in order to inspire people to keep speaking out and to encourage conversations about the continued necessity of social protest.

The cleverly-produced mural promotes the ACLU’s #KnowYourRights Campaign and mobile app, and features a section where protesters can insert themselves into the painting and take a photo, which they will hopefully post to social media with hashtags that appear on the mural.

Trump’s efforts to deport millions of undocumented people of color have been met with strong pushback from the vast network of activist groups that form the base for the Moral Monday Movement. Earlier this year, ICE raids snatched men, women, and children from their homes, schools, and places of employment. In response, several North Carolina churches are offering sanctuary to undocumented citizens, under threat of violence and exploitation by the state. As seen in these photos from the “A Day Without an Immigrant” march, thousands have taken to the streets in protest and continue to disseminate immigrant rights information. 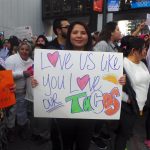 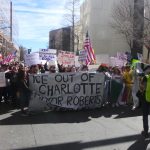 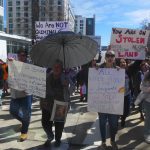 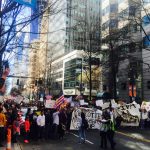 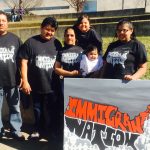 In coalition with civil rights and immigration lawyers, the North Carolina NAACP has been successfully and LOUDLY battling a myriad of legal bulwarks, including the barring of previously arrested protesters from the North Carolina General Assembly (NCGA), a measure intended to slow the momentum of the movement and to reduce the number of protesters entering the space.

Rev. Barber is one of the protesters who is presently barred from the NCGA.

Spirithouse continues to expand The Harm Free Zone Movement, a community accountability model intended to reduce and eventually eliminate our reliance on law enforcement by using art and culture to uncover and create new accountability strategies and practices.

A 2017 ROOTS Partner in Action partner, Spirithouse is working with Alternate ROOTS to redevelop and mount the Collective Sun – Reshape the Mo(u)rning interactive performance intervention, in 3 North Carolina cities.

Spirithouse is also expanding the Harm Free Zone book study of Dr. Baz Dresinger’s book Incarceration Nations from a citywide to a southern regional series. Beginning in Africa and ending in Europe, Incarceration Nations is a first-person odyssey through prison systems in 9 different countries that humanizes those who have been incarcerated and raises questions about America’s prison system.

This summer, in collaboration with Black Mama Magic, SpiritHouse will release the #IWishYouCould video campaign to illuminate the concerns and fears that Black mothers experience when their children leave the house. 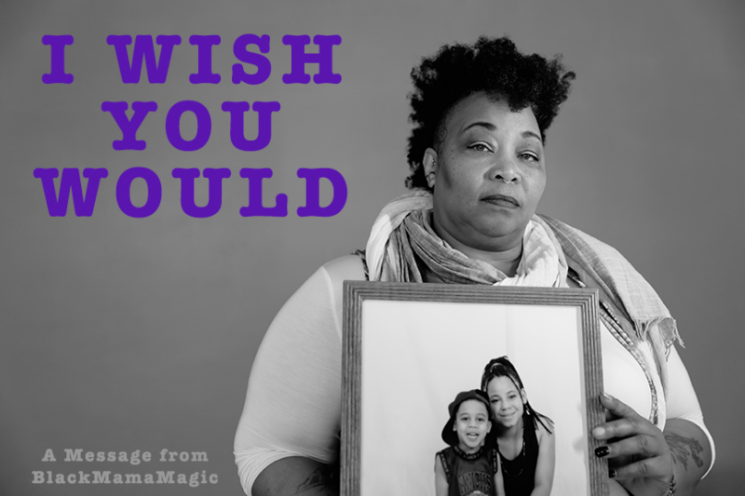 A statement from the Black Mama Magic collective reads: “As Black Mamas, we refuse to accept the normalization of violence against Black children. We reject the presence of police in our schools. We will not allow our children to be criminalized, dehumanized, or underserved. We will fight for our children. In public. In private. Loudly. Brazenly. Persistently. Strategically. Unapologetically. Forever.”

The videos are part-interview, part boldly-worded #IWishYouWould statements that make clear what Black women will do to defend our most precious gift to the world – our babies.

Finally, this fall, SpiritHouse will co-host the 2017 Southern Movement Assembly, in collaboration with Project South, Alternate ROOTS, and other governance council organizations in Whitakers, North Carolina.

According to the southtosouth.org website, “Since 2012, more than 1,000 community leaders in The South have gathered at six Southern Movement Assemblies to discuss and analyze the pressing issues of our time, develop bold visions and commit to action steps to build power.”

These tremendous examples of resistance organizing are merely a snapshot of the work that we continue to do on behalf of one another. We are still here, we are rooting and grounding and fighting and making love and prioritizing peace and planting seeds for the years to come.

Katina Parker is a filmmaker, photographer, and writer based in Durham, North Carolina.