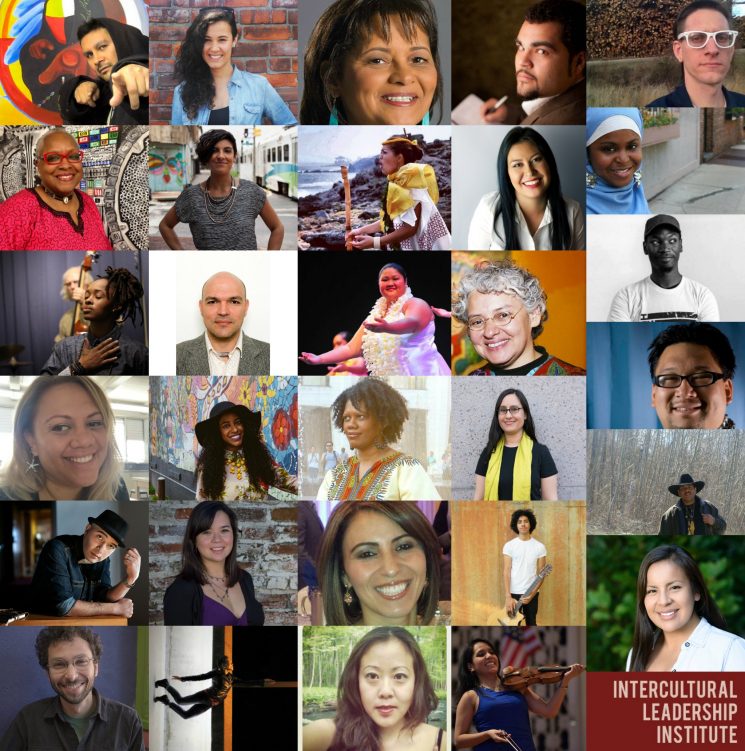 ILI Announces Its Inaugural Fellows and Program Vision for 2017-18

The Intercultural Leadership Institute (ILI) announced their 2017-2018 inaugural fellows and program dates. Conceived of by non-profit regional and national arts organizations – Alternate ROOTS, First Peoples Fund, National Association of Latino Arts and Cultures (NALAC), and PA’I Foundation – ILI is a newly formed, paradigm-shifting personal and leadership development program for artists, culture bearers, and other arts professionals. Its purpose is to give voice to arts practitioners and advocates who are less represented in the dominant culture of the United States, including those whose lives reflect the traditional heritages of African Americans, Native Americans, native Hawaiians, Latinx culture, and other communities and cultures throughout the U.S.

Carlton Turner, Executive Director of Alternate ROOTS, offers key insight about this initiative: “In this political moment when our country’s leadership is skewing male and white, ILI represents a space for leadership development where narratives from indigenous, native, and immigrant voices are central. Our future rests in our ability to honor all voices as significant contributors to the fabric of society. ILI also nurtures an intergenerational space for that conversation to grow.”

From hundreds of applicants, 30 fellows were chosen to participate in a year-long, interactive leadership development activities. They represent different geographic locations ranging from Michigan, Hawai’i, Rhode Island, Georgia, New York to California and other places. “ILI is an opportunity to meet and work with a diverse group of culturally grounded emerging and master artists engaged in arts and social justice work across the nation,” says Vicky Holt Takamine, Executive Director of the PA’I Foundation.

For this first year, the program dates will take place in Jackson, Mississippi (March 22-28, 2017), September in Lakota Territory (western South Dakota), and Hawai’i (early 2018). Four key goals are for fellows to:

Lori Pourier (Oglala Lakota), President of First Peoples Fund, offers insight into the transformative intention of ILI to impact language by defining “culture bearer.” She explains, “A culture bearer is an individual who has dedicated their life to passing on the ancestral knowledge and tradition-based arts ecology of a land and its people.” She adds, “All the fellows may not be culture bearers but the partners deem it important that they be open to learning about indigenous-based practices that are rooted in the very land where they live and work.”

The ILI founding partners first met in 2004. Citing their own experiences as leaders within the arts and culture field who regularly participated in programs designed to support one’s personal and professional development, the partners recognized that while most of these programs provided important skills and connections, they also largely reinforced dominant cultural norms, modes of learning, and ways of being and interacting that were sometimes out of sync with their commitment to cultural equity and to change-making in and with their own communities.

“As we grew and as we built trust over time, we developed a shared analysis of the need for a leadership program of, by, and for the artists and culture bearers in our communities. We spent many years discussing the concept among ourselves and with a wide range of allies who helped shape the incubation of ILI leading into the 5-day pilot experience we hosted in San Antonio in the fall of 2015,” said Maria López DeLeón, President and CEO of NALAC.

In defining the program as an “Intercultural Leadership Institute,” the partners are making an important distinction. Cross-cultural approaches emphasize comparing two or more distinct cultures. Intercultural approaches, on the other hand, stress the shared grooves of social memory, co-habitation, and mutual accountability while allowing adherents to challenge dominant norms as well as honor and find solidarity in the differences of their histories, traditions, identities, and vocabularies.

Alternate ROOTS supports the creation and presentation of original art that is rooted in community, place, tradition or spirit. We are a group of artists and cultural organizers based in the South creating a better world together. As Alternate ROOTS, we call for social and economic justice and are working to dismantle all forms of oppression – everywhere.

First Peoples Fund (FPF) supports the Collective Spirit® of artists and culture bearers. Rooted in the traditional values of generosity and respect, humility and fortitude, FPF uplifts the Indigenous Arts Ecology – relationship based ecosystems that strengthen Native arts and culture grounded in ancestral knowledge. We accomplish this by (1) supporting culture bearers and artist entrepreneurs as transformative community leaders, (2) deepening tribally based organizations’ capacity to serve artists and their families and (3) investing holistically into the next generation of resilient artists.

National Association of Latino Arts and Cultures (NALAC) is the nation’s leading nonprofit organization exclusively dedicated to the promotion, advancement, development, and cultivation of the Latino arts field. In this capacity, NALAC stimulates and facilitates intergenerational dialogues among disciplines, languages, and traditional and contemporary expressions.

The Intercultural Leadership Institute has been made possible thanks to generous support from American Express, Andrew W. Mellon Foundation, the Bush Foundation, Nathan Cummings Foundation, the National Endowment for the Arts, Southwest Airlines, and Surdna Foundation. Additional support has been provided by the general funding partners, members, donors, and volunteers of Alternate ROOTS, First Peoples Fund, NALAC and PA’I Foundation.