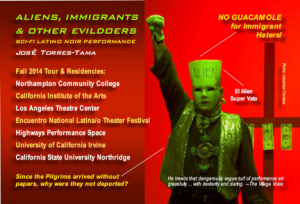 In partnership with Highways Performance Space in Santa Monica, the ALIENS LATC shows take place on Thursday, October 16 at 8:30 p.m. and on Sunday, October 19 at 2:30 p.m.  LATC links: http://thelatc.org/

José Torres-Tama is an NEA award-wining performance artist and Louisiana Theater Fellow. In ALIENS, IMMIGRANTS & OTHER EVILDOERS, the artist deftly shape-shifts into a variety of aliens who expose the hypocrisies of a system that dehumanizes immigrants while exploiting their labor.

ALIENS is politically provocative, visually, dynamic, and profoundly moving, and the artist puts a human face and heart on the vilified Latino immigrant.

Developed through a National Performance Network Creation Fund Award, the ALIENS tour began at Northampton Community College in Bethlehem, PA for a one–week residency in September, and has now invaded California.

What the Critics say:

An adroit performer and lucid writer, José Torres-Tama bravely takes us to the dark side where most dare not to go.
—DC Theatre Scene

On Monday, October 27, he will be at University of California at Irvine for a performance reading from his soon to be published poetry collection titled Immigrant Dreams & Alien Nightmares, which includes performance poems from the ALIENS solo.  Published by Diálogos Books New Orleans, this debut collection documents twenty-five years of bilingual verse from 1989 to 2014.

From October 28 through 30, he will conduct a three-day residency at California State University Northridge and perform ALIENS on Tuesday, October 28.  Also, he will conduct performance workshops and guide participating students in a Public Intervention on campus to bring attention to the crisis at the border.

ALIENS is politically provocative, visually dynamic, and hilariously absurd, and it humanizes the demonized “immigrant alien” by putting a human face and heart on immigrants under persecution in the so-called land of the free.  ALIENS is inspired by interviews the artist conducted with immigrants in the cities of Houston, New Orleans, and Washington, DC.

ALIENS sold out a two hundred seat-theater at Vanderbilt University, three nights
at Pangea World Theater in Minneapolis, and two hundred forty
saw it for a Unitarian Conference in Phoenix, AZ.

His battle cry is NO GUACAMOLE for Immigrant Haters!

He is an NEA award recipient for his multidisciplinary performance work and a Louisiana Theater Fellow.  His hybrid performance practices are informed by an inventive fusion of film projections and conceptual rituals with bilingual texts, historical research, and a magical realist Latino voodoo aesthetic—creating spectacles that are visually dynamic and politically charged.

In 2013, he received a National Performance Network Creation Fund to develop the ALIENS Taco Truck Theater Project and transform a used food vehicle into a mobile stage to reach non-traditional theater audiences.  ALIENS, IMMIGRANTS & OTHER EVILDOERSreceived a 2010 Creation Fund and chronicles the current persecution of Latino immigrants across so-called the land of the free.  In September 2014, Diálogos Books New Orleans will publish Immigrant Dreams & Alien Nightmares, a debut collection of twenty-five years of performance poems and other verse.

National theaters that have presented his work include Performance Space 122, Theater for the New City, and the Nuyorican Poets Café, all in New York City; Highways Performance Space in Los Angeles; the National Hispanic Cultural Center in Albuquerque; DiverseWorks in Houston; GALA Hispanic Theater in DC; and the Contemporary Arts Center in New Orleans.

In the academy, Duke, Cornell, Vanderbilt, Tulane, LSU, University of Michigan, University of Maryland, and many others have presented his solos and lectures on art for social change.  www.torrestama.com