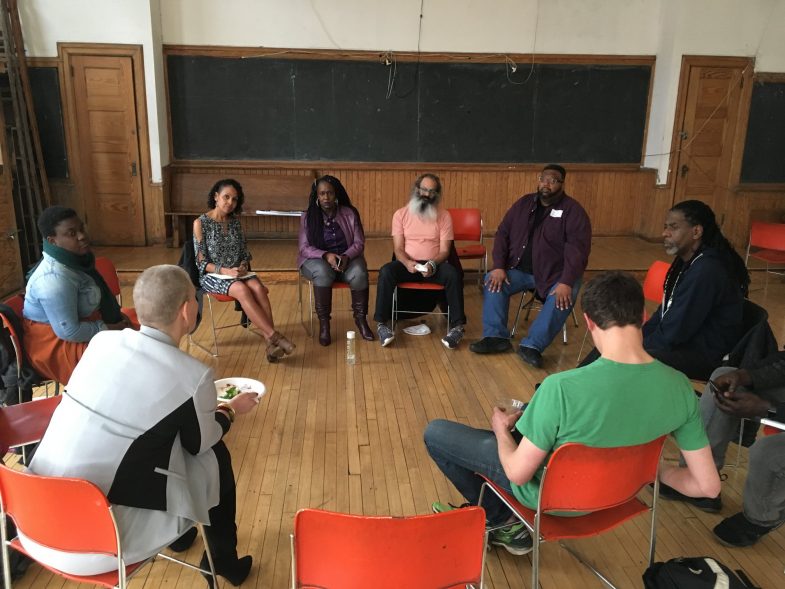 One of Michelle Ramos’ first moves as ROOTS’ new executive director was to announce the #ROOTSRoadTrip – that she’d be packing her bags and hitting the road to meet ROOTers in their communities. Responses came rushing in, and from April-June Michelle made nine #ROOTSRoadTrip visits. This is the first of a three part Travelogue in which Michelle reflects on her journey.

It was with intention we kicked off the ROOTS Road Trip in ROOTS’ home city of Atlanta, GA. After a day or two of rain the clouds parted and provided our Atlanta-based ROOTers with a beautiful day to spend some time sharing and learning from each other. We selected Alkaloid, our then co-working space to hold the first Road Trip stop. Little did we know this would be the last ROOTS meeting in this space, as shortly after we made the decision to vacate the offices to become an 100% remote office. A great send off and way to step into our next “all remote” iteration of ROOTS.

The broad generational span of members that showed up, about 20 in all, was one of the things I noticed right away. Hearing from Eli Lakes one of our youngest ROOTers about what YOOTS (ROOTS youth and young artists) are thinking about was a highlight for me. He was joined by ROOTS’ new members Julie Johnson and Guled Abdilahi, who were watching the FB live feed and decided to come on down and enjoy the later part of the afternoon with us. ROOTS elders were a strong presence that day with Paula Larke, Priscilla Smith, Kathy DeNobriga, and Eleanor Brownfield raising memories of elders that have passed and bringing them into the space; this was especially meaningful and touched many there including me, very deeply. It was a perfect grounding for me to get started on this amazing journey and after the visit made a note to self: we must re-engage our presence in Atlanta and we must continue to gather and collect living histories from our ROOTS elders while they are still here with us! 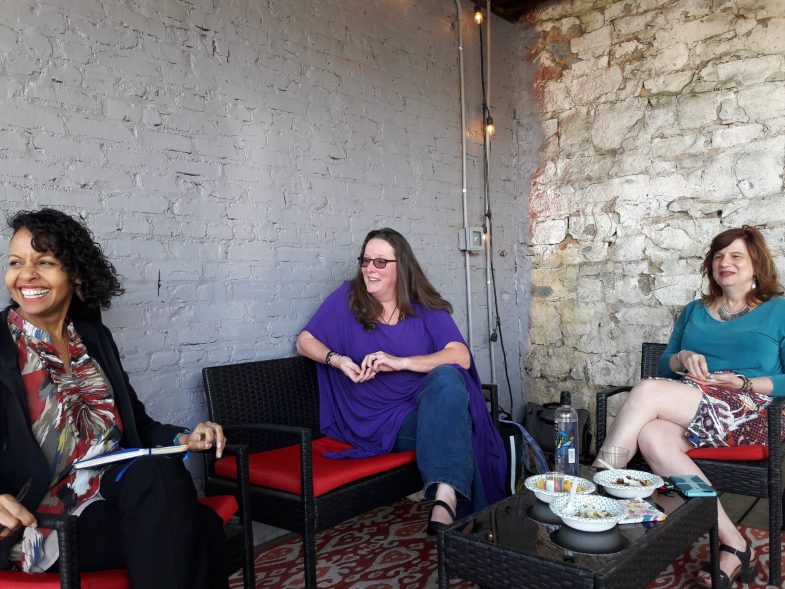 After spending some time in the Washington, DC doing Partners in Action community visits with Programs Director, Wendy Shenefelt we were pleasantly surprised to be greeted at The Festival Center by a room full of Washington, DC folks and even some Baltimore, MD ROOTers who took the train down to join us for a beautiful afternoon of music, movement, sharing, and discourse. This stop started with Ahmane’ Glover and Rev. Erik and Sanctuaries members leading us in a drum circle where we sang, spoke, and moved to introduce ourselves into the space as a check in. We heard from members about issues that were pressing for them as artists including their ability to do their work while trying to make a living wage, the stress of gentrification on their cities, and their strong appreciation for the ROOTS network.

As part of my inquiry at each stop I asked the members “What are you most afraid I might do as the new Executive Director?” ROOTer Ashley Minner swiftly answered the call by stating her concerns that ROOTS might become a national organization and lose its Southern identity and traditions. I quickly reassured her, and others present that I hold carefully the responsibility of keeping ROOTS true to its core, its Southern culture and founding principles and that was in no way at risk or jeopardy. But I did offer that despite this commitment by me, ROOTS in many ways is already being perceived as a national organization. Larger arts organizations nationwide are leaning into ROOTS for our expertise, knowledge, and years of work in culture, equity, and community building. I shared that I didn’t think it was an either/or proposition, but that I believe we can strategically engage at a national level without sacrificing our values and mission, nor diminishing in anyway our 42 year legacy. The world needs what ROOTS has to offer!

I also addressed questions about our recent anonymous donation that has earmarked funds to support the Native/Indigenous communities. I honestly shared that this is an area that ROOTS needs to do more work in, and that the responsibility of this gift was being taken seriously and training for staff/board and authentic engagement with this community was in the works. I shared my first action on this front was to ask the funder for more time, so we could do some internal work first before we moved forward with the gift. I am very excited at the work we have started and look forward to sharing more in the coming year.

Another participant stated she almost didn’t come to the convening because she didn’t think ROOTS was an organization that could support her work in criminal justice, but as I talked and shared my family and work history in this arena and my desire to expand ROOTS work in this area, she said she was grateful she came and looks forward to continuing the discussion as we look to found a Criminal Justice Working Group to better understand how we can work more deeply with those doing work at this intersection.

As the evening closed we were joined by many non-ROOTS folks who were there for another meeting. They joined right in the conversation and after we concluded wanted to learn more about ROOTS Week and how they could become members. I have spent many days and weeks in Washington, DC over the years engaging with other organizations including Dance/USA, Dance Metro DC, and the NEA, but ROOTS showed me a part of DC I never knew about – areas like Ivy City that I was unaware existed and, yet again, witnessing the communities being torn apart by gentrification bringing tears to my eyes and heart. I will never look at Washington, DC the same again, and I am eager to return to the Baltimore area soon to hear more from the many artists ROOTS has in this region as well. 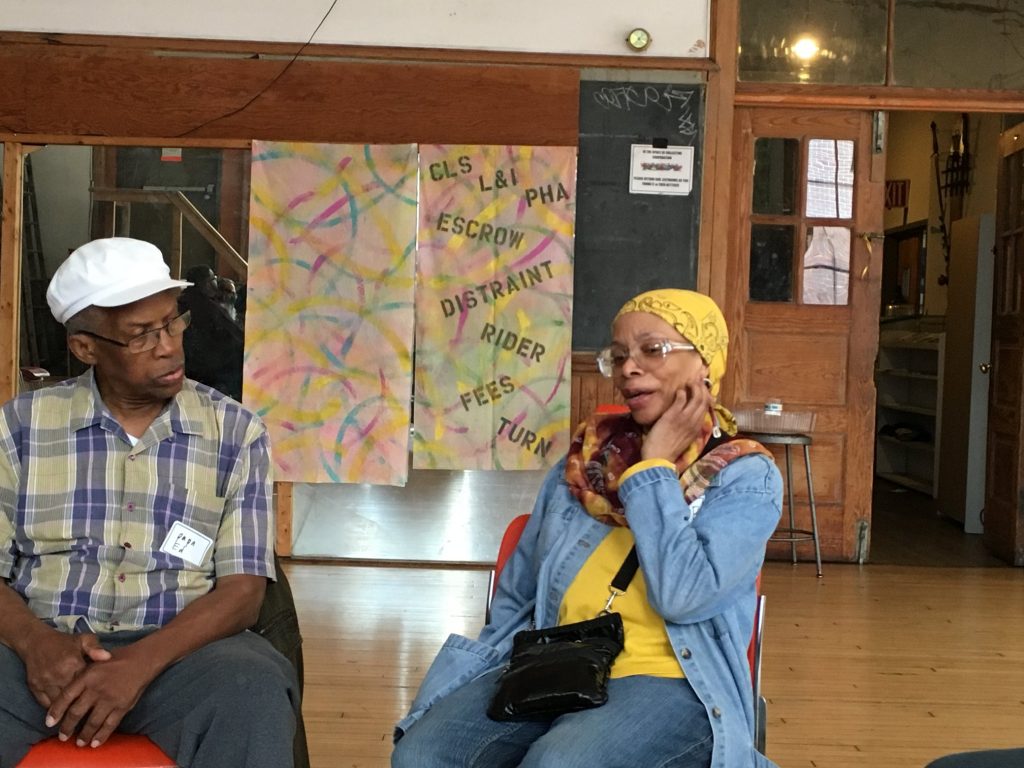 Many thanks to Jamie Merwin for bringing together an intergenerational group of artists, activists, and community members.

Well, you had to know there was going to be one stop where things just didn’t go as planned, and unfortunately Philly was that stop. I decided to train up from Washington, DC for this stop  – I have always loved to travel by train due to the calming nature of this type of travel that I don’t get the opportunity to enjoy as much anymore. On this particular day however, it was anything but calming. On arrival to Union Station my train showed a 30-minute delay, then 45, then 90 minutes. Word in the station was a tree fell on the track somewhere south of us. By the time I rolled into Philly I was over an hour late for the visit. But gracious host Jamie Merwin and ROOTS staff member Joseph Thomas were able to get a discussion started, in ROOTS fashion, while awaiting my arrival. Despite the delay, many folks were able to stay, and some came by later to visit. We had about 15-20 folks all in all, which was remarkable, considering only two people in the room were ROOTers!

I heard from local artists that their biggest challenges are being able to sustain their work and make a living at the same time. Gentrification was again raised as a primary cause for their struggles. I had an engaging talk with radio host Purple who is an entrepreneurial talk show host working to elevate artists’ voices in the city. Her guest that day was a spoken word artist who walked in the room flanked in an all too familiar orange prison jumpsuit and shackles draped around his neck. He asked to share some of his work with the group and it was mind blowing – his poetry was powerful, deep, and struck everyone in the room in such a raw unapologetic way. Folks at this stop were interested in learning how, as a city outside of the defined geographic ROOTS region, they could plug in and was there a benefit for them of membership, if they joined.

These artists are doing amazing work, and I was struck by how much my heart strings tugged at wanting to find a way to support their work and artistry, but for the first time feeling bound by the regional rules. I walked away in contemplation about how or what can be done for artists outside of our region who, despite living in urban cities, still suffer from the same oppressions that ROOTS artists do, where living in a major city has not helped or enhanced their opportunities at all. This weighed heavy on my mind as I boarded a plane to Oakland, CA that night to attend a conference with Center for Media Justice.

We’ll be back next week with #ROOTSRoadTrip Travelogue: Part 2!