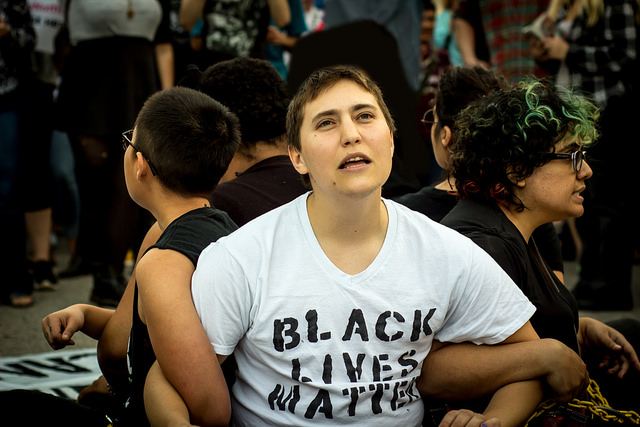 All photos were taken by Elainiel Baldwin at an HB2 Action on March 24. To view the full album, click here.

On March 23, North Carolina passed House Bill 2, (aka the Public Facilities Privacy and Security Act or “HB2”). Since then businesses, artists, and organizations with pre-existing commitments to perform or host conferences in the state are urgently considering whether to cancel or relocate.

The law, which targets transgender and gender non-conforming (GNC) people, requires that each of us use the public restroom that corresponds to the gender we were assigned at birth – as if anyone casually carries their birth certificate as proof of identity. The potential consequence of being “caught” in the “wrong” bathroom is arrest, as well as public humiliation.

Read more: “This is Not a Bathroom Bill, This is a Hate Bill”: Rev. William Barber on NC’s HB 2

Conversely, veteran punk-influenced musician Cyndi Lauper, whose sister is an out lesbian, opted to keep her June 4th commitment at Raleigh’s Duke Energy Center for the Performing Arts. All proceeds from the concert plus her management team’s commissions will be donated to Equality North Carolina, a political voice for the state’s LGBTQ citizens.

For now, the NBA will keep the 2017 All Star game in Charlotte, believing that they have more leverage to change the law by staying put. Even Michael Jordan, NBA Hall of Famer and part owner of the Charlotte Hornets who is famously silent on political issues, has come out against HB2.

At the grassroots level, many organizations like Alternate ROOTS, Southerners on New Ground (SONG), and the North Carolina NAACP, are opting to stay and fight HB2 through protest, education, engagement, and culture change.

Fast-approaching, the 40th annual gathering of ROOTS Week seems both apropos – and bittersweet. Scheduled for August 10-14 in Arden, North Carolina, our theme is “A Call to Action – Emergent Organizing.” Our challenge – conservative political forces are organizing to roll back hard-won rights and protections for people who are LGBTQ, Black, undocumented, female-bodied, poor, indigenous, pretty much anyone who is not intended to benefit from White supremacy.

How Did This Happen? 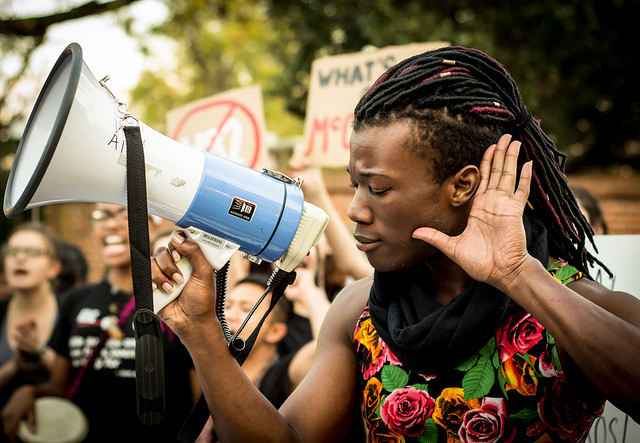 During late March, a special session was called by the North Carolina General Assembly, at a cost of $42,000 to taxpayers, expressly to pass HB2 into law before April 1, the day that a newly approved ordinance prohibiting discrimination in housing and public accommodations based upon gender identity and sexual orientation would have taken effect in Charlotte, North Carolina.

In less than 12 hours, the bill passed the House and Senate votes and was then signed into law by Governor Pat McCrory, making North Carolina one of twenty-something states to strategically maneuver in order to codify gender-based discrimination into law. HB 2 overturned all existing local ordinances and protections for LGBT citizens in North Carolina and banned any communities from ever enacting any such protections again. 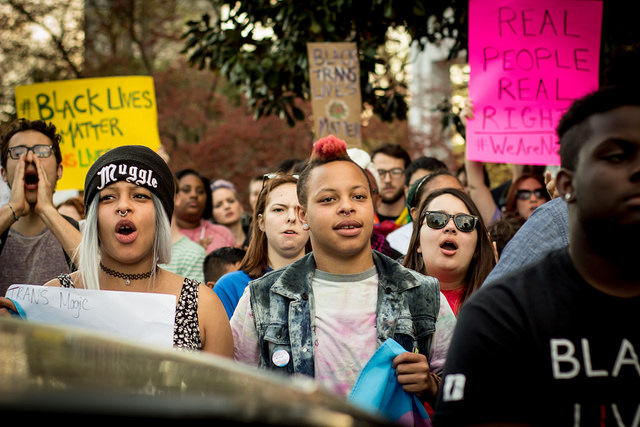 Conservatives have been organizing for decades against the LGBTQ movement, but have been on the ropes in recent years due to significant cultural shifts and perceptions. The timing of North Carolina’s HB2 bill as well as discrimination-based legislation in Georgia, Mississippi, and 20 other states with more than 100 active bills is no accident. Some are bathroom bills, some let judges refuse to marry same-sex couples, some let businesses deny services to LGBT people – but they all have the same goal: legalizing discrimination against queer people.

This full-blown assault is intended to incrementally erode legal gains made by the LGBTQ movement during the Obama administration and is happening in anticipation of a Republican president (possibly Donald Trump). If the tactics seem familiar, it’s because they are borrowed from anti-Black, anti-immigrant, and anti-abortion campaigns.

The level of political vitriol leveled at Black Lives Matter and queer/trans activists (who are often people who live and work at the intersection of these identities) has served as a rude awakening for those who once believed we live in a post-racial America.

In fact, Black Lives Matter, LGBTQ, reproductive rights, undocumented and several other movements have been so vocal, and in many ways successful, that those who would normally remain closeted about their views, can hardly contain themselves. As we have seen through the resurgence of Klan rallies and the targeted violence of Trump rallies, the agents of White supremacy and hetero-patriarchy feel threatened. When they feel threatened they rework the political system so they remain in power.

At the very least, LGBTQ protections will be used as a wedge issue during the 2016 election.

The Issue in a Nutshell 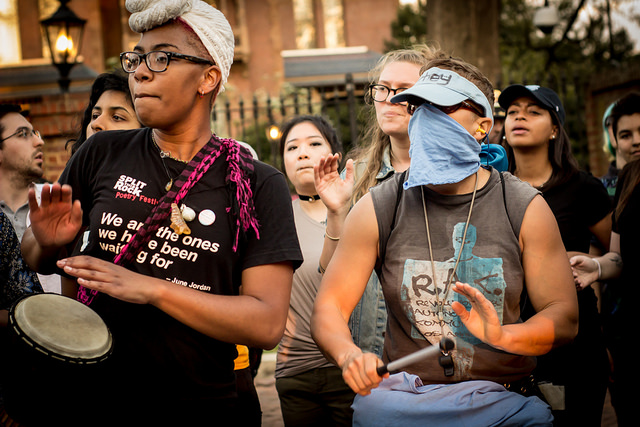 Trans and gender non-conforming (GNC) people sometimes need to use the restroom – in public. Yes. In public.

In general, public restrooms can be gross and creepy. Remember in high school, how the rebels and outliers converted the stalls into office space, deterring the uncool kids and the undersized from making use of the facilities? Or that time you dropped your phone in the toilet? Or when your 2-year old willingly put their mouth on the toilet dispenser?

Many people, especially parents of small children, loathe using public restrooms. Conservatives are manipulating our justified discomfort with entering spaces where we place ourselves in the most vulnerable and sometimes embarrassing of positions. This is an age-old tactic.

Meanwhile, there are no – as in zero – reported cases of trans people inciting violence in public restrooms. In fact, statistically, trans and GNC people are at greater risk for bodily harm than cisgender people, both in and outside of public restrooms. 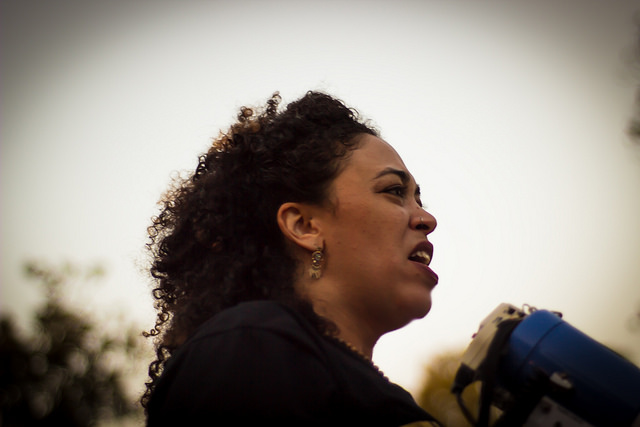 Despite a concerted effort by conservatives to confuse, hoodwink and otherwise destroy trust between LGBTQ people and their communities, the Moral Monday Movement, an emboldened and seasoned cadre of activists, has been making national headlines ever since HB2 was passed. The movement, which began disrupting legislative proceedings and shutting down the state’s capitol in 2013, just after Gov. McCrory was elected, consists of thousands of organizers and clergy from Raleigh, Durham, Charlotte, Asheville, Greensboro, and towns through North Carolina.

On April 25, in the midst of a massive #MoralMonday campaign targeting HB2 and intended to disrupt the NC General Assembly meeting, Mara Kielsing, out trans woman and Executive Director of the National Center for Transgender Equality, used the women’s restroom in the governor’s mansion and then Tweeted about it. She was not arrested.

If it feels silly reading those words, know that it feels just as foolish to write. But it’s small acts of civil disobedience like this that draws attention to the absurdity and unfairness of discriminatory laws. Later that day, Kiesling was arrested for participating in a peaceful sit-in at the North Carolina state legislative building – not for using the women’s restroom, which is currently, a state offense.

Buzzfeed and The Advocate other news headlines ran Kiesling’s story. 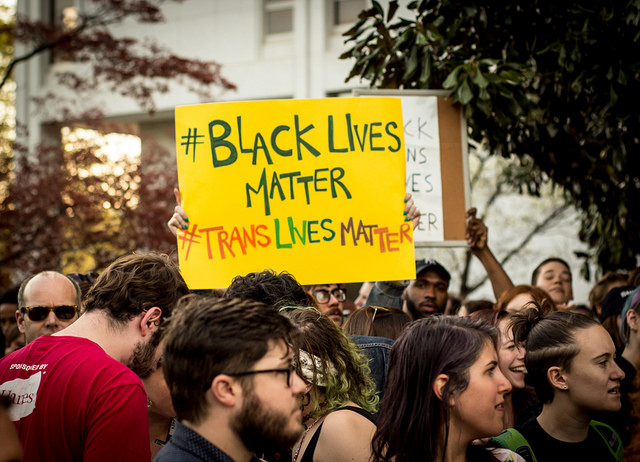 This is where organizations like Alternate ROOTS can play a key part in repealing HB2. In order to successfully push back against the assault on LGBTQ, female-bodied, Black, and undocumented people, we need more individuals to be vocal about the absurdity and unfairness of HB2 within their networks and circles of influence.

In 2015, Indiana Governor Mike Pence (R) approved a bill that allowed businesses to deny services to LGBT customers, citing their religious beliefs. He was widely criticized in the press and publicly stated that he never anticipated so much backlash.

In other words, he thought he could get away with it.

According to The Advocate, Indiana took a $60 million hit after passing the anti-gay law. Subsequently, a bill to provide protections for LGBT customers, employees and tenants was passed by the legislature and signed by Governor Pence.

The question for Alternate ROOTS members:

What forms of art activism and civil / disobedience can we contribute to amplify the pushback against anti-LGBTQ legislation?

What can we do to tell the stories of the people who are being targeted and castigated?

What risks are we willing to take to create the world that we believe is possible – and necessary?