Teatro Sin Fronteras: Shifting Narratives to Include Latina/os in the Rebirth of Post-Katrina New Orleans 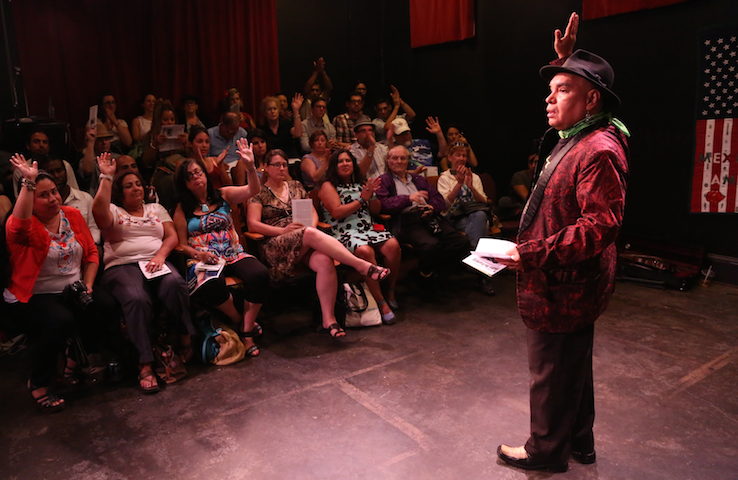 “The workers and families who helped rebuild New Orleans live in terror today … If they leave their homes to walk their children to school, if they go to the laundromat or the barber shop or the grocery store, they will be targeted for nothing more than looking Latino, and their families might never see them again.” [i]

–Bill Quigley, Professor of Law, Loyola University, New Orleans, LA, from “Why I Stand With the Immigrant Workers Who Rebuilt New Orleans.”

Every Wednesday evening since their creation in 2007, the Congress of Day Laborers — the New Orleans activist group made up of undocumented immigrant workers fighting for their human rights — holds their meetings at a local church. Attending is like bearing witness to a new civil rights movement, but in the Spanish language.

At a mid-June Congreso meeting, family members of seven men and women who were in deportation proceedings shared testimonials on the brutal manner in which local Immigration Customs Enforcement (ICE) agents busted into some of their houses with guns ablaze and no warrants — as if in a commando raid to apprehend terrorists. Agents here have been known to raid a home during Bible study class, cuffing the mother and father while their U.S.-born child screamed to NOT have his parents treated like criminals. Often, local ICE Agents act indiscriminately like a secret police, accosting those who simply look Latina/o — as if Louisiana had a racial profiling law on the books like Arizona’s SB 1070.

More recently, ICE has targeted the leadership of the Congress of Day Laborers. Disguised as contractors, ICE agents lured a founding member of the group, José Luis Gomez, into a vehicle by offering him work at a known day-laborers’ pick-up point. Once entrapped, he was questioned and arrested. Since this 2011 incident, he has been fighting deportation proceedings, and filed a human rights violation case against local ICE agents. His case has garnered national attention, and has shed light on the myriad violations ICE has exacted on New Orleans reconstruction workers who struggle to survive in a city that they have helped to rebuild.

Latina/o immigrant laborers are still ubiquitous around town at most construction sites, but their suffering remains in the shadows. 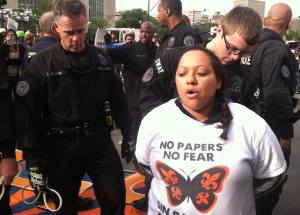 Sixteen Congress of Day Laborers members were arrested at a protest they staged in front of New Orleans City Hall on November 14, 2013, which shut down traffic for three hours. Photo: José Torres-Tama, 2013.

Where is the local media in all of this? Generally absent and uninterested in the plight of thousands of Latina/o immigrants who have helped to physically reconstruct and resurrect a once devastated and flooded post-Katrina New Orleans. Bill Quigly’s opening quote is from an opinion piece the Times-Picayune had to publish because of his status as a recognized social justice lawyer and scholar at Loyola University. It was his response to a courageous act of civil disobedience where 16 undocumented members of the Congress of Day Laborers were arrested for shutting down traffic near City Hall to bring attention to ICE’s brutal deportations. The New York Times covered that dramatic protest, and the local media scrambled to run something — to not be shamed.

Enter Teatro Sin Fronteras / Theater Without Borders, a cultural arts initiative of the ALIENS Taco Truck Theater Project supported by Alternate ROOTS’ Partners in Action program. Developed in partnership with Puentes New Orleans, a Latina/o not-for-profit organization, and my producing entity, ArteFuturo Productions, Teatro Sin Fronteras is a series of seven movable feasts that combine performance and theater, visual arts, dance, poetry, film, music, and Latina/o foods to highlight the contributions of Latina/o artists to the “new” New Orleans, and raise consciousness about the plight of our immigrant brothers and sisters. 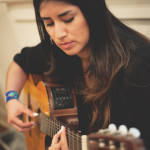 Teatro Sin Fronteras aims to shift a post-Katrina mainstream media narrative that has generally painted a black and white racial picture of post-storm New Orleans. These events employ the arts as a catalyst to shape a better understanding of who we are as a diverse Latina/o culture here in New Orleans, and bring attention to the brilliant Latina/o creative beings who have also contributed to the post-Katrina arts renaissance.

Teatro Sin Fronteras #1, held at the Arts Estuary 1024 in mid-May, featured a recent transplant to the city name Diana Cervera, who opened with a repertoire of Mexican-bolero inspired original songs. Diana sang the pain of a mother, Sandra, who left her daughter behind to work in these United States, escaping economic despair, while being labeled illegal and criminal. Sandra llora — Sandra cries because she carries the heartache of her daughter’s pleas on phone calls to Mexico, “When are you coming back, mama?” We never hear about the pain of a mother being forced to leave her daughter just to support her. Instead we hear ubiquitous lies, from Donald Trump and others, that immigrants are coming here to steal, bring disease, and traffic in drugs.

New Orleans own Jennifer Pagan, a self-proclaimed Honduranean hybrid, performed an excerpt of her award-winning, one-woman show Shoebox Lounge, and mercurially moving from comedy to tragedy, told the story of her Honduran-born abuelita’s return to her flooded house after the storm. Rarely, do we hear the stories of Latina/os and their losses post-Katrina, and Ms. Pagan makes you laugh out loud and cry as she takes you on an emotional roller coaster ride in her work. 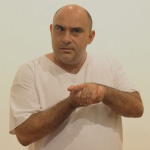 In Teatro Sin Fronteras #2, writer, performer, and University of New Orleans professor, Antonio Garza performed an excerpt of A Mexican’s Guide to the Middle East, a work about his time in the occupied territories of Palestine and his daily interactions in New Orleans, through frontera-colored glasses. As if standing on any local street corner, he comically engages the audience in his daily racial negotiations as a Texas-born Latino who is sometimes mistaken for being Arab.

As MC for all Teatro Sin Fronteras events, I also perform excerpts from my post-Katrina solos, and have thrown down reshaped movements of ALIENS, IMMIGRANTS & OTHER EVILDOERS  with the collaboration of classical violinist Denise Frazier. The ALIENS performance speaks directly to the pain endured by immigrant laborers here in New Orleans, with characters based on interviews of reconstruction workers, while also exploring the larger persecution of immigrants across the land. 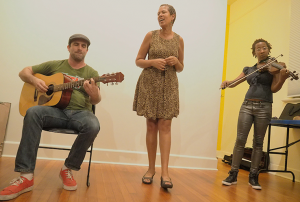 Each Teatro Sin Fronteras event finishes with a local Latina/o band, and the June 9 event featured Margie Perez, an Afro-Cuban singer and songwriter, who performed Spanglish songs celebrating her Latin heritage. During intermission, we literally feed the audience for free with savory Latin food from Sarita’s Grill, a post-Katrina restaurant owned by a Cuban entrepreneur. Also, at each event, we are filming testimonials from members of the Latina/o community and their post-storm stories, and asking the community at large on their thoughts of Latina/o immigrant contributions to reconstruction.

The presence of Teatro Sin Fronteras in the cultural events taking place across the city for the tenth anniversary of the storm has generated strong local media interests. The clear message of these events is that Latina/os are to be recognized as part of a growing community here in New Orleans. We are driving our own narratives, and celebrating many Latina/o artists who are often neglected by a theater and visual arts scene that has also been redefined as just black and white.

Dean Shapiro, an arts writer for The New Orleans Advocate, wrote a thoughtful piece that notes the often forgotten Spanish Colonial legacy of New Orleans, and we are expecting the national press to catch on as Teatro Sin Fronteras develops. Shapiro’s article inspired a call from the mayor’s Neighborhood Engagement Office to have the remaining four Teatro Sin Fronteras events listed in the city’s official calendar of tenth anniversary events.

As an artist, all I can do is sound a clarion call to wake up and smell the café con leche. 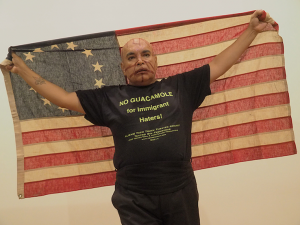 New Orleans’ long lasting Latina/o community — with its generations-old link to the Spanish Colonial legacy of the late 1800s;  historic ties to Havana, Cuba; the largest Honduran population in the U.S.; and our newly arrived Latina/o immigrant brothers and sisters — has been invaluable to the recovery in the past decade, but we have been rendered invisible in most mainstream media accounts of historical narratives after the storm. Our immigrant brothers and sisters occupy a parallel universe, working in the shadows of a city and country that exploits their labor and demonizes them simultaneously.

I believe we need to excavate the many hidden truths and acknowledge us all in order to fully recover from our collective storm trauma. Only then, will we truly fulfill the collective theme we all adopted to return and rebuild our beloved city — only then will 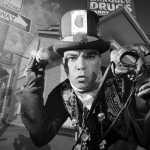 Born in Guayaquil, Ecuador, raised in Jersey City and New York City, and living in New Orleans since 1984, José Torres-Tama is a recent MAP Fund 2015 recipient for the ALIENS Taco Truck Theater Project. Also, he has received an NEA Regional Artists Project Award for his multidisciplinary performances, a Louisiana Division of the Arts Theater Fellowship, two National Performance Network Creation Fund awards, and a Joan Mitchell Foundation grant for his art book publication New Orleans Free People of Color & Their Legacy. A poet, visual artist, and performance artist, he explores the underbelly of the American Dream mythology and the current anti-immigrant hysteria gripping the United States. He teaches traditional drawing at the Ogden Museum in New Orleans, and from 2006–2011, he contributed commentaries to NPR’s Latino USA program, exploring the challenges of life post-Katrina and Latino immigrant contributions to the reconstruction of the city. Dialogos Books New Orleans just published a debut collection of 25 years of poems called Immigrant Dreams & Alien Nightmares.

0 comments on “Teatro Sin Fronteras: Shifting Narratives to Include Latina/os in the Rebirth of Post-Katrina New Orleans”

1 Pings/Trackbacks for "Teatro Sin Fronteras: Shifting Narratives to Include Latina/os in the Rebirth of Post-Katrina New Orleans"