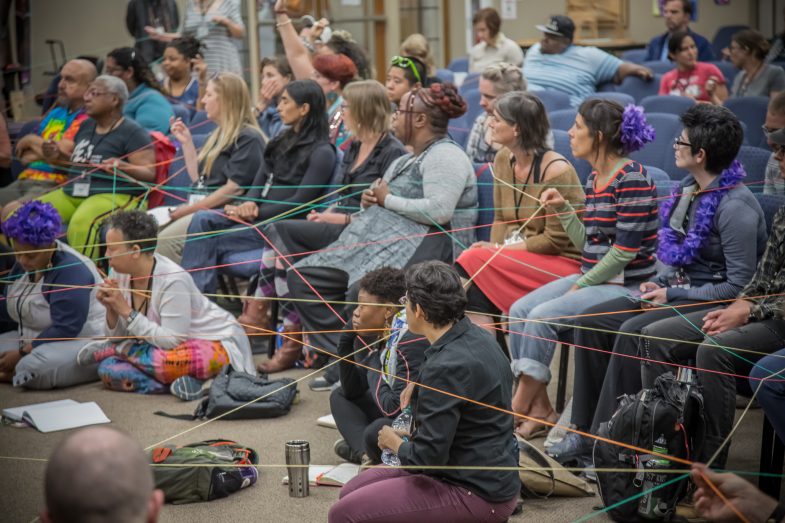 Racism doubles or triples every other oppression. Racial classifications were invented by early naturalists and anthropologists in the 1700s and refined in the 1800s in the years leading up to the Civil War. Race was created as a means of political and social control to, in the words of the Governor of Virginia in a letter to the King of England, divide and conquer poor whites from people of color so that they would never again take up arms against the crown.

Today, science has proven what many have always known: that racial classifications are biological fiction with no scientific basis. No one characteristic, trait, or gene distinguishes us racially. There is and has only ever been one race … the human race.

It is racism that enforces the lie that there are separate races. Through rule of law, custom, and culture, policies and practices, successive generations over the centuries have come to believe a massive delusion. A delusion and illusion that has afforded some the means to amass wealth on an enormous unprecedented scale. Wealth built atop genocide and theft of Indigenous land, and forced labor through slavery and Jim Crow segregation.

It was Kimberlé Crenshaw, a black feminist scholar, who introduced the theory of intersectionality to feminist theory, identifying how interlocking systems of power impact those who are most marginalized. Systems of oppression don’t live in our society nor in our lives separate and distinct from one another. As someone said, “Don’t ask me to divide myself among my oppressions.”

Understanding the magnifying, compounding power of race and racism is fundamental to any analysis of systemic structural oppression for those who live at the intersections of or who have been elbowed to the margins of American society. ROOTS Week 2018 artists/activists will teach and learn together working side-by-side in our understanding of how the various systems live in us.

Alternate ROOTS’ commitment to cultural equity and social justice began in 1976 at its inception. This commitment was further activated when its current mission statement was adopted in the mid-1980s: “As a coalition of cultural workers we strive to be allies in the elimination of all forms of oppression.” Throughout the following three decades we have consistently worked to design our operations and programs and to equip our members to meet the challenges of “UpROOTing Racism and Other Oppressions.” There have been successes and failures along the way, but the commitment has remained constant, influencing every facet of the organization – from membership recruitment to the design of re-granting programs, to our consensus driven decision-making process, to the content of ROOTS Week.

Over the years during ROOTS Week, we have hosted training sessions from leading anti-oppression entities, external to ROOTS, who have offered us valuable skills and an understanding of concepts and approaches. Over time we have become more and more intentional and explicit in examining our own structures and actions, to make the road by walking it. As ROOTS’ visibility and leadership role in the national community increased, we came to understand that there is expertise within ROOTS to do this training work. As we have long sung in ROOTS, “We are the ones we’ve been waiting for…”

At the 2017 ROOTS Week, a cohort of ROOTS members undertook the design and facilitation of UpROOTing Oppression sessions for ourselves and are doing so again for 2018. Over the course of the last year we have re-designed the sessions for this year, incorporating feedback from 2017 and expanding the cohort of facilitators. We are using a process of working in smaller groups to expand our ability to discuss how the content we offer is landing, and to share strategies for taking the work beyond the week.

ROOTS’ 40+ year history is short in the context of 566 years of structural oppression, but we are on the journey together. We hearken to John O’Neal’s lifelong signature, “Yours in the Struggle.”

Here’s what you can expect for this year’s UpROOTing trainings:

ROOTS Week participants will be arranged into three cohorts who will travel together through the entire UpROOTing arc, guided by cohort facilitators:

There will be three trainings offered through the week and each cohort will get each training on different days. So stick with your cohort and you’ll get the full arc of this years UpROOTing trainings: