“We Don’t Do Drive-Bys”: A Conversation with Don Harrell, ROOTS Meets Zora

I sat down with Don Harrell, liaison for the second ROOTS Weekend, in Eatonville, FL, January 28-31, 2016. As Executive Director Carlton Turner explained, “Organizing for ROOTS in Eatonville didn’t start when we began thinking about ROOTS Weekends or about ROOTS’ 40th anniversary but about five years ago, under Don’s direction, with a small contingent of ROOTS artists.

The series, ROOTS Weekends, is a three-year initiative to more fully engage a broader community of artists. It is a next step from the change in membership that we accomplished in 2014. Now that our membership structure is more porous we have to be more visible to a larger community of artists.” Near the end of our conversation, Don and I were joined by long time ROOTer Kathie deNobriga.

Jan Cohen-Cruz: Don, would you lay out the ROOTS Week model?

Don Harrell: The members of ROOTS’ Executive Committee were looking for multi-faceted ways to celebrate this 40th anniversary year – meaningful, energizing for the organization, helpful in establishing firmer places throughout the South to do ROOTS’ work, and a context to show appreciation for ROOTS elders, and leave something in their communities. We thought it was important to go some places where there is a big ROOTS presence, so the first ROOTS Weekend was in New Orleans, and also important to go places where there are fewer ROOTS members, like this second event, in central Florida.

JCC: What was your role?

DH: To select a community partner, make the overarching local connections and arrangements, engage the local arts community in awareness of Alternate ROOTS and our plans for the Central Florida community, to serve as a liaison with our community partner, and to work with staff and interested members to actualize our plans. Without hesitation I chose to partner with PEC (the Committee to Preserve the Eatonville Community), an organization that serves as a vanguard against efforts that are likely to contribute to the demise of Eatonville, Florida, and is also the producer of The Zora Neale Hurston Festival of the Arts and Humanities.

I first became aware of PEC when my wife Tutu and I were invited to a ZORA! Fest event and learned the history of Eatonville – “The Town That Freedom Built.” Eatonville is the oldest black municipality in the US that has been continuously self-governed by Blacks since 1887. I appreciate that, in the 1960s, PEC founders and longtime members organized successfully to block the effort to build a 5-lane highway through Eatonville, that would have led to it suffering the fate of far too many Black settlements and towns – extinction. When the connection to Zora Neale Hurston became clear, the direction in which to focus my arts activism inclinations became clear. Accordingly over the next decade, I served PEC and the town itself in very artistic capacities, including producing a festival within a festival that included other ROOTers including Carlton Turner, Maurice Turner, Skipp Coon, and Sunni Patterson. 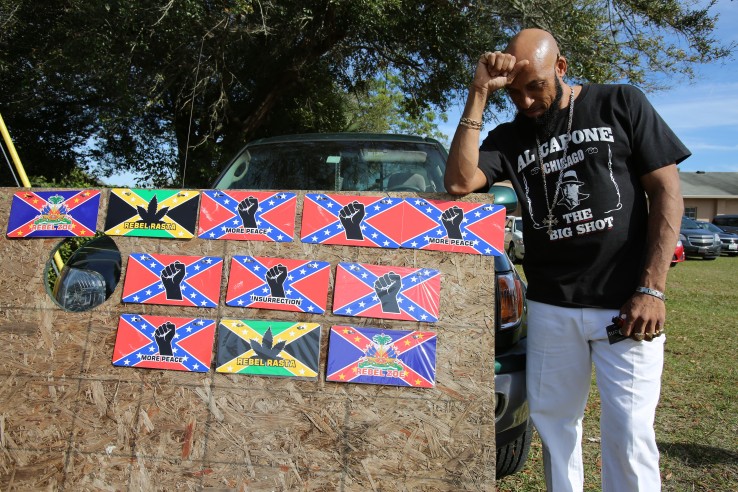 A vendor at the ZORA! Festival in Eatonville, Florida. Photo: Ariston Jacks.

DH: In many ways, ROOTS Weekend-Eatonville is simply another step in our effort toward community transformation, with the use of the arts and our special brand of community activism as the change agents.

Wealthy developers still have their eye on the town, and are oblivious to or could care less about its historical significance and connection to the legacy of Zora Neale Hurston.

JCC: What were the goals for this ROOTS Weekend?

DH: That ROOTS as an organization would understand the importance of Zora as a cultural icon, the town of Eatonville as a metaphor for African Americans everywhere, and the Association for the Preservation of the Eatonville Community (PEC), as a model of community activism in need and deserving of our attention, while building a stronger presence here in Central Florida and the state of Florida as a whole.

JCC: And what happened?

DH: These goals were achieved on all levels, in my opinion. Our membership as a whole is extremely astute, and as such “connecting the dots” in this regard was a forgone conclusion.

JCC: What were the greatest challenges?

DH: The most difficult task, as I now see it, is determining how to build on our presence in the community in a way that addresses its most crucial needs.

JCC: What advice do you have for ROOTS’ staff vis-à-vis upcoming ROOTS Weekends?

DH: Allow, as they did in this case, enough time to organize. Find creative ways to identify and energize local artists, arts organizations, and community activists whose missions align with ROOTS, while bearing in mind that local organizers alone may not be able to accomplish them by themselves. 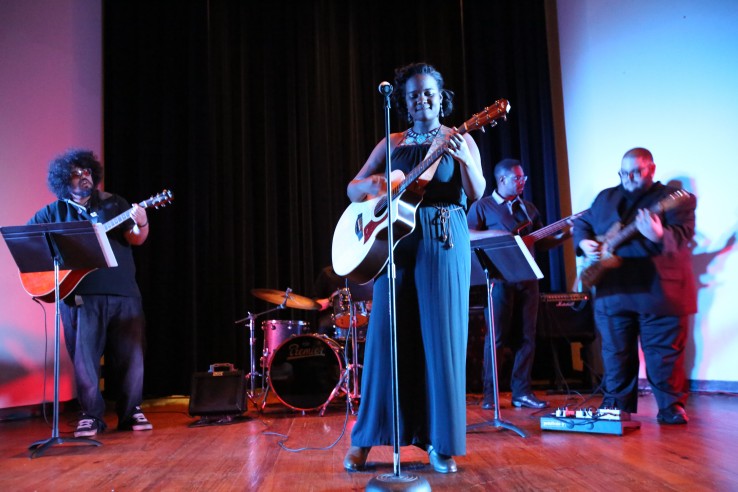 JCC: What role do you see for artists vis-à-vis the threat of gentrification, which would totally alter Eatonville’s historic character?

DH: Artists can support efforts to foster the sustainability of Eatonville and other towns like it that were a part of the post-slavery Black Town and Settlements Movement. In the case of Eatonville specifically, they can help to uplift the legacy of Zora Neale Hurston, while making sure that the implications of her work as related to issues of social justice are fully understood and hopefully internalized.

JCC: How did curating happen for this event? How were aesthetic decisions made?

DH: Though my input was encouraged, Ashley Walden Davis and Wendy Shenefelt were ultimately responsible for curating and they did a magnificent job. We had agreed that everything would relate to the legacy of Zora in some form or fashion. I couldn’t be more pleased with the final outcome and I thoroughly enjoyed the process as well.

[Kathie deNobriga joined us, commenting on the weekend’s structure whereby one day was specifically focused on ROOTS and the other on Zora.]

Kathie deNobriga: Why was the ROOTS programming on Friday? I would have preferred having that day, which was content rich (the scholar presentations, etc.), for ZORA! Fest.

DH: Winter Park Civic Center, the place where we had our reception and workshop/symposium, was unavailable to us on Saturday. And we wanted to give ROOTers down time to enjoy Saturday’s main event. A criticism at the New Orleans ROOTS Weekend was too much programming.

Kd: I think it’s fine to be back-to-back for three days having come from elsewhere in many cases. And more, the design has to depend on the place. In New Orleans there’s culture everywhere. Here, the ZORA! Fest provided the cultural contact. What works in one place won’t be the same everywhere; we’ve learned that from doing community-based work…

DH: Yes, I agree. But please allow me to bring up one of the strengths of the Weekend and of ROOTS broadly – seeing a younger generation of artists and activists joining ROOTS en masse. There was a period in our organizational history when there was a lull in new energy. It was like starting a civil rights march and looking back only to find that nobody’s following you, and now they’re here!  My assumption is that this young, totally dedicated and extremely capable generation of activists are all over the country. 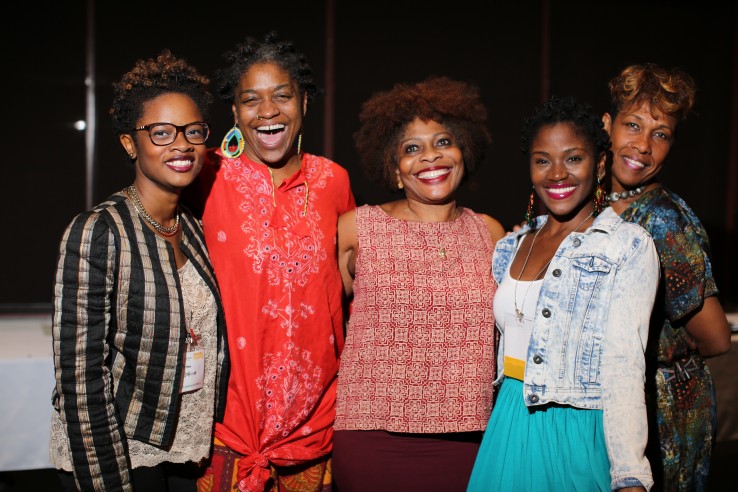 Kd: Yes, me too. . . Another reflection on ROOTS Weekends – when we assemble at one place, I’d like to offer ROOTS’ accumulated experience to help solve a local problem. Having someone like Tufara [Waller Muhammad] in the room, who really knows how to educate, organize, mobilize around something specific… a lot of ROOTers do… could be a think tank component of these weekends, focusing together on whatever the issue is now, like the highway through Eatonville was some years ago. Which would begin with local people identifying the problem. The conversation would not only shine light on a local problem but also educate ROOTers who are struggling with that issue at home.

DH: Exactly. We don’t do drive-bys: If ROOTS commits to a place, we commit.