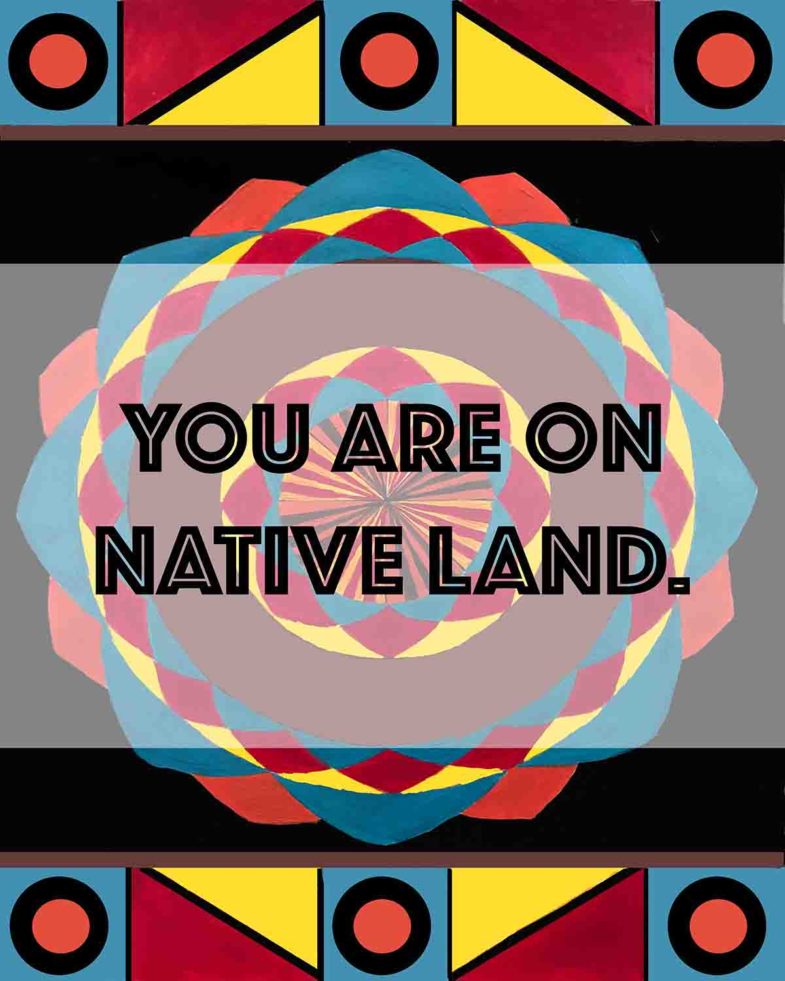 YOU ARE ON NATIVE LAND. Poster series by Jessica Clark and Ashley Minner, 2018-19.

Picture it: East Baltimore, 2005. It was a beautiful, late spring afternoon in Patterson Park. The sun was shining. It seemed like everyone was outside enjoying the weather.

I was 22 years old and by myself, walking a path down the hill, to watch some friends play soccer. Coming up the path, at the foot of the hill, I noticed several middle school-aged girls who were laughing and shouting to each other. As we got closer, I was amazed to realize they were also shouting at me. One of the girls had a long, metal pipe in her hand that she was swinging around, and then swinging in my direction. “GO HOME!” they yelled. “This is OUR park. We’re Baltimore girls!” I was so taken aback, I didn’t know how to respond.

Before I had a chance to say or do anything, a friend of mine and several of his friends— all grown men— had run from the soccer field to my defense. One of them took his belt off and started swinging it at the girls. He tried to hand the belt to me and he told me to hit them. I just stood there, dumbfounded. He handed me his cell phone instead and told me to call the police.

No one calls the police. But, as this ridiculous situation appeared to be escalating, and I didn’t have a better idea, I dialed 311. The police sounded unconcerned, despite the ruckus in the background. They said they would need two cross streets in order to dispatch officers to our location. I couldn’t give them two cross streets because we were in the middle of the park.

Thankfully, finally, the girls went on their way up the hill, and the men returned to the soccer field. I overheard one of them ask my friend, Vicente, what started the fight. “What was their problem with Ashley?” he wanted to know. Vicente answered, “They told her to go home. They said she’s not American.” “But… isn’t she American?” the guy asked. Vicente answered, “Claro, ella es Americana, pero no mera Americana.”

He said of course she’s American, but not American-American.

American, but not exactly.

A lot can be gleaned from this true story. But for my purposes here, and at ROOTS Week last year, I shared it to point at simple, yet incomprehensible ways different groups of people, all suffering with legacies of colonialism, can become pitted against one another. Furthermore, I shared it to raise a question: Why is it that someone who looks like me, on this land, is perceived to be foreign?

The answer is settler colonialism. But what does that mean? First, let’s get a working definition for colonialism, generally. When I teach, this is the one that I use: Colonialism is the policy or practice of acquiring full or partial control over another country, occupying it with settlers, and exploiting it economically.

Then there are different formations of colonialism. For example, in “post colonial” societies, at least in theory, colonization ends (hence the prefix “post”) because the settlers “go home.” While in country, their primary interests are natural resources and labor, extracted from indigenous populations. Sound like anywhere in the world you know?

In “America,” we have settler colonialism, which is distinct from post colonialism in that the settlers never leave. Therefore it never ends. Their primary interest is in land. The settlers have no use for indigenous populations and must therefore either kill or otherwise disappear them, in order to essentially replace them, all the while establishing their own identity as rightful owners and inhabitants of the land. In fact, over time, the settlers come to be regarded as the natural owners and inhabitants of the land.

How does this work, exactly? At different times (arguably at all times), throughout the course of this nation’s history, the policy of the federal government toward indigenous people has indeed been genocide. As in Option A. We will just kill them all. There are countless examples of this policy made manifest, some more overt than others. In fact, tactics used by the United States to literally rid itself of its “Indian problem” have been so sweepingly successful, many people actually believe that American Indians are extinct. Obviously, this is not the case.

Additional tactics to disappear Indians include, but are not limited to: assimilation, or the coerced adoption of “American” culture and values (“Kill the Indian, save the man”); mythologization, or the absorption of real people into racialized fantastical characters (think Disney’s Pocahontas vs. the real Pocahontas, who was a child victim of kidnapping and rape); historicization, or the refusal of a contemporary existence to Native people (why we aren’t recognized for being who we are in mainstream society unless we are wearing traditional clothing); stereotyping (think Hollywood Indians and you got it; by the way, we don’t all have long, flowing black hair and copper colored skin; not all of our ancestors rode horses and lived in teepees); and racist caricaturization (Washington Redskins, Cleveland Indians, Land O’ Lakes butter…).

There is another tactic, perhaps even more insidious than these, known as blood quantum. Some 30 years ago, Michael Omi and Howard Winant rocked the social sciences when they first published their Racial Formation Theory, which argues that race is a socially constructed identity, wherein the content and importance of racial factors are determined by social, economic, and political forces. In other words, race is a made up thing and there is no firm biological basis for it. All of our DNA, or “blood” is 99.99999999999% the same. However, we know that the perception of race has very real lived consequences. Even today, race can determine everything from who gets a job to who has the best chance of surviving a traffic stop. It should not go without mention that the construction of race in America has resulted in the lumping of well over 500 American Indian nations, each with their own distinct culture, into a single categorization. But I digress.

Blood quantum is the supposed ability to measure one’s blood to determine what percentage of said blood comes from certain racial or ethnic groups. It has been applied to black folks in the United States to preserve chattel slavery and its legacies for as long as possible, through the concept of hypodescent, or “the one drop rule,” i.e. if a person has as much as one drop of “black blood,” then they’re considered black. Conversely, with American Indian populations, blood quantum is often applied in the determination of tribal membership or citizenship and certain “Indian blood” thresholds must be met in order for acceptance. Consequently, American Indian people must only procreate with members of their own tribal group (pick one if there is more than one), and be able to prove it, for generations, in order for their descendants to have “enough blood” to be “enrolled.” The imposition of blood quantum rules, of course, results in American Indians essentially breeding ourselves out of existence.

Most of you probably know that I recently got married. My husband, Thomas, is also an enrolled member of the Lumbee Tribe of North Carolina. His mother is Lumbee and his father is black. My mother is Lumbee and my father is white. If we have children, we will be able to enroll them because their blood quantum, like ours, will exceed the 1/16 threshold that the Lumbee Tribe requires, at approximately 1/2 Lumbee. And even if our children, in turn, have children with non-Lumbees, if they do a good job of maintaining a cultural connection to our tribe and homeland, their children should be able to enroll as well, at 1/4 Lumbee. If our grandchildren marry non-Lumbees and the trend continues to our great grandchildren – and nothing changes about our tribe’s enrollment policy – our great great grandchildren will be the first generation unable to enroll. See what I mean?

But blood quantum is probably the least of our worries. We chose one another and that much is settled. What we wonder about now is: Will our children have to go through what we went through growing up? How will they handle not being recognized for who they are, when it happens? How will they explain who they are when they seldom, if ever, see people like themselves reflected back to them in popular culture, or even on the street – when what is supposed to represent people like them are racist, sexualized caricaturizations, and no one seems to understand what’s wrong with that? Will they believe us when we tell them that they’re beautiful?

Will they be interested in knowing who they are and participating in their Lumbee culture throughout life, when they really have to make an effort to do so? How will they handle having their identity constantly questioned, by both Native and non Native people – maybe by family, too? What will they say when they run into someone dressed as an Indian on Halloween, or when they encounter some non Native person who wants to smudge them, or when kids in their class tell them they’re “part Indian” too because everyone is? They will certainly be faced with the same temptations and threats of violence that we were, and are – that have harmed so many of our loved ones. Will they give in? And who will they blame? How can we make them strong? What can we all do to change the world they’ll grow up in?

There is much more to say and I am already over my word count. I will miss seeing everyone at ROOTS Week this year, but I’ll be back in 2020!

Some thoughts / suggestions in the meantime: 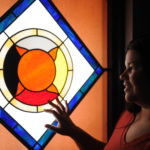 Ashley Minner is a community based visual artist from Baltimore, Maryland. An enrolled member of the Lumbee Tribe of North Carolina, she has been active in the Baltimore Lumbee community for many years, and regularly visits communities throughout the U.S South and Latin America as well. Ashley is a professor of the practice and folklorist in the Department of American Studies at University of Maryland Baltimore County, where she also serves as the inaugural director of the minor in Public Humanities. Ashley is a doctoral candidate in the Department of American Studies at University of Maryland College Park, where she is completing her dissertation on the changing relationship between Baltimore’s Lumbee community and the neighborhood where they first settled. You can learn more about her recent research here.