A FILMMAKER WORKS TO ERADICATE HUNGER 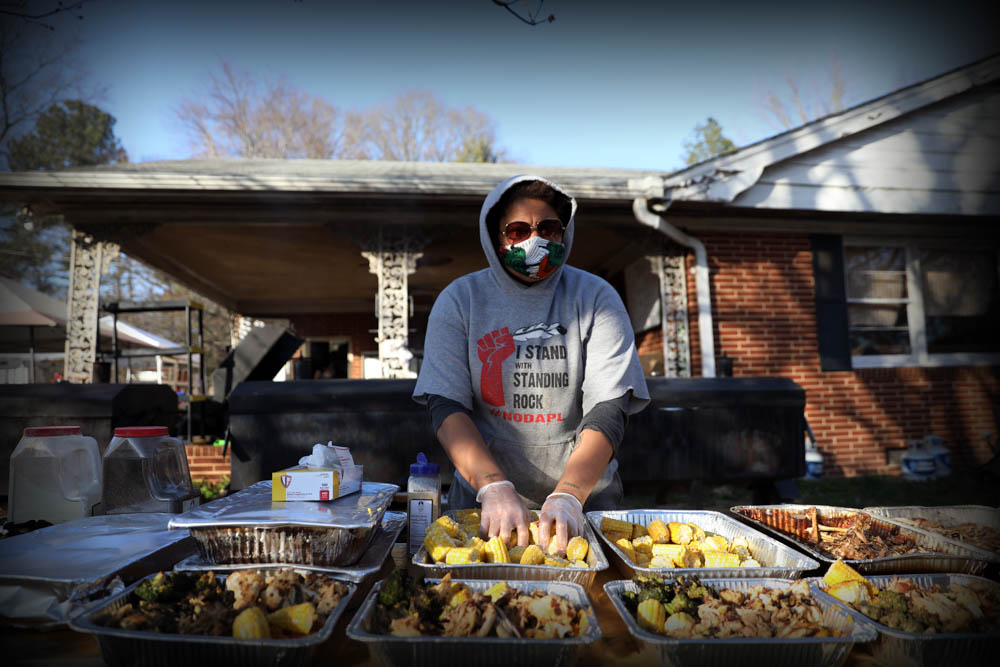 Maybe 10 years back, I’d stood in my gravel drive, bewildered by the dozens of strangers purposefully criss-crossing one another as they gently dropped food rations into row upon row of gaping, open-mouthed brown paper bags.

Although deep in slumber, I was perplexed and uncertain: “Who are all these White folks and what are they doing in my yard?”

Flash forward to November 2021, a dreamy dejavu-like recollection seamlessly melds with my most current realities. To my left: 9,000 pounds of kale, collards, cabbage, apples, red potatoes, and carrots; to my right: a fridge trailer packed with 750 pounds of raw chicken and turkey, 600 pounds of butter, 150 loaves of bread, 7,200 eggs plus several boxes of eggplant, chard,celery, peppers, etc. Suddenly, the vision from over a decade ago made sense. I was and am on-path.

All this time, I’d carried that memory of things to come and completely forgotten about it, gone further into documenting our movements through film, photos, and words, until that moment at Feed Durham NC’s second annual Thanksgiving Grocery Give-Away when I looked into my yard and saw the bounty of food, 6 dozen purposeful stewards, and goodwill as far as the eye could see. Initially, we committed to making 100 bags: cabbage, kale, collards, red potatoes, sweet potatoes, onions, carrots, celery, oranges, apples, poultry, eggs, butter, bread, a variety of spices, and a handwritten Love Note. Over a few days, demand skyrocketed to 600 bags, which left us hustling to raise enough resources and recruit enough volunteers.

The week we packed grocery bags I was so amped I could barely sleep. Every day there was some new development that built on all the pre-existing positive momentum. Blueprint NC confirmed they were giving $2,000 that Monday, Fridge trailer got delivered quick and easy that Wednesday, Caleb drove to pick up a 500 pound chicken donation from Montaire Farms that Thursday, and Farmer Foodshare delivered 8,000 pounds of produce that Friday morning. We spent about half the day shopping at Restaurant Depot for anything we couldn’t buy through our local farms.

Then Saturday, my front yard was buzzing like opening day at the state fair. Between 10am and 6pm about 70 people passed through my yard: breaking down bulk spices, beans, rice and flour into family-sized containers; packing each grocery bag with colorful produce; and making sure every household received a handwritten Love Note. 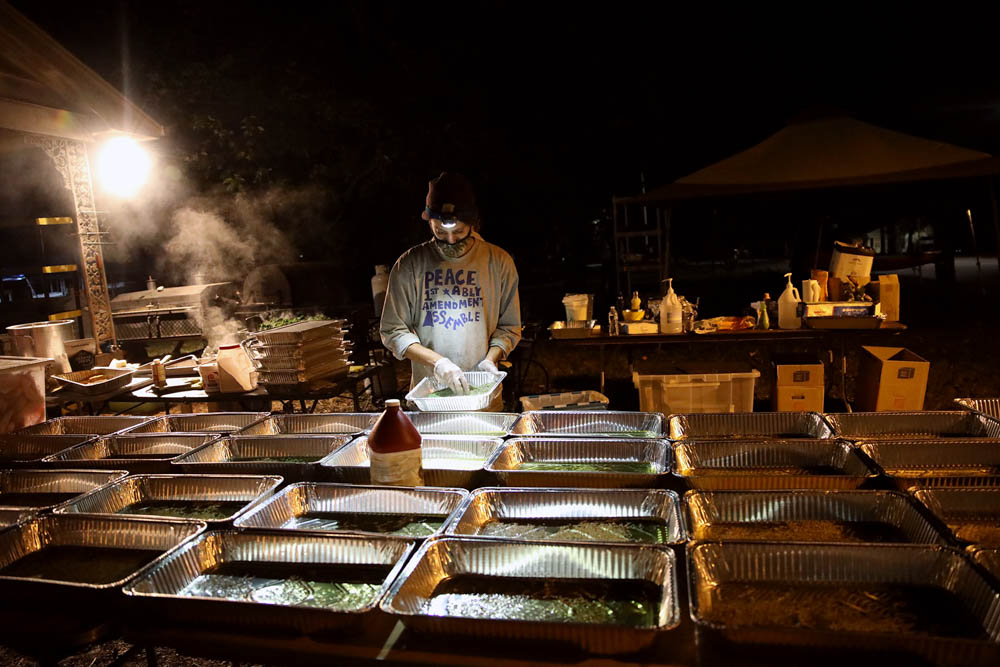 Hunger disfigures. It makes people desperate.  It’s the ones we leave behind who fall prey to white supremacy. Every. Single. Time. Regardless of race, gender, class, or religion. No exception.

Since the pandemic began, we’ve fed more than 55,000 people from my front yard, through Feed Durham NC—a mutual aid collective I started at the beginning of shutdown. Since April of 2020, every six to eight weeks, we have assembled on the one-acre corner lot where I live and steward, to cook tasty, nutrient-dense meals for upwards of 2,000 neighbors-in-need. We leverage our personal networks and skillsets to gather money, excess produce, and volunteers so we can nourish elders, widows, families living in cars and on the streets, those who are homebound or chronically ill, unsupported LGBTQ+ folks, undocumented families, elementary students, and their loved ones.

We turn no one away.

In one year’s time, Feed Durham NC has grown from two dozen volunteers to over 500. We are an all-weather crew that prepares food in a DIY outdoor kitchen with the use of 6 trailer smokers, 4 griddles, 10 burners, 3 washing stations, several socially-distanced tents for chopping produce, and a bedroom-sized refrigerator. Our youngest volunteers are a pair of five-year-olds who scrub root veggies with joyful abandon while our eldest have been seminal civil rights organizers well into their seventies.

We insist on high-quality food and high-quality treatment for our most vulnerable neighbors. We understand that hunger is a time immemorial tool of war, political manipulation, and the suppression of human rights organizing, and that eliminating hunger is the first and most critical step to creating a just world in which every child is positioned to experience healthy outcomes.

We know that we are only as safe, well, and joyful as our least hungry neighbor. 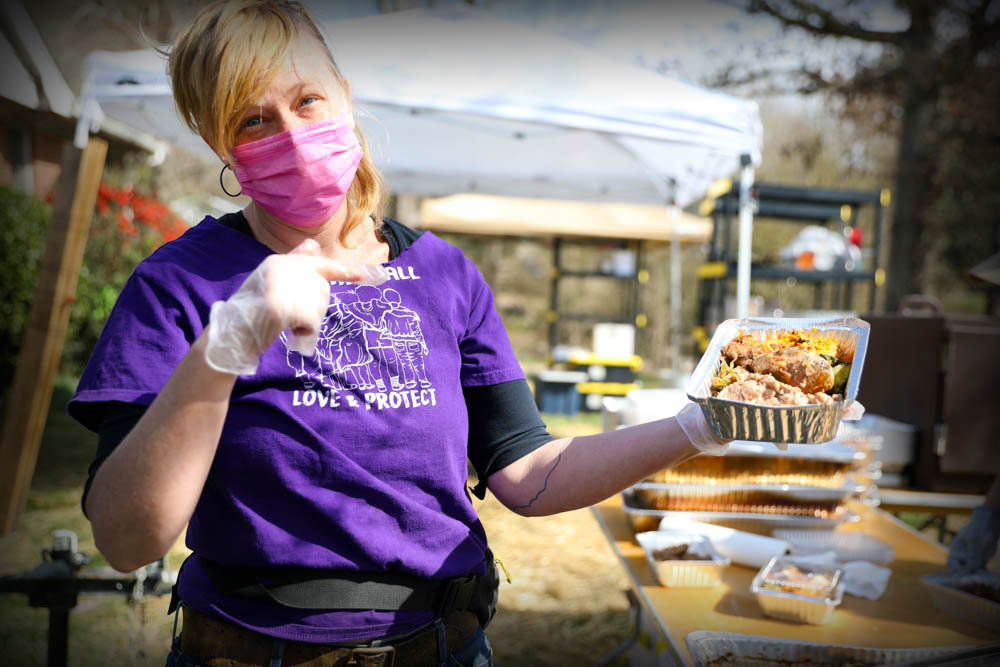 Despite making significant contributions to our communities during a time of tremendous uncertainty and loss, the 55,000+ people we fed were hungry again within hours, days, or weeks after we helped out, depending on the extent of the support they received. For 2022, we’re shifting towards disrupting the root causes of hunger, and sharing our organizing blueprints so that we can sustain hundreds of thousands of people across the U.S.

We’ve been strategizing about how to disrupt food scarcity at its roots by organizing and leveraging our vast networks to help people grow their own veggies, herbs and fruits; teaching culturally-relevant recipes and foraging/preservation methods in Black and Brown communities; fostering a culture of thoughtful giving that shifts unused/dormant resources from middle class and wealthy communities to under-resourced communities, and participating in and promoting deep-tissue, anti-racist/decolonization dialogues, trainings and techniques that explore the connection between “privilege,” poverty, state violence, civil/voting rights suppression and excessive policing.

This winter, we’re launching a Neighborhood Service Corps Initiative to shape and guide all of this work.

These next few months promise to be excruciating for many of our neighbors. We have the wherewithal and the resources to make life more livable for all the people who are stressed and struggling as we re-imagine our “new normal,” in the midst of COVID spikes, alarming weather trends, and an intensifying chaos that feels just as contagious and unpredictable as the coronavirus.

Through it all, Feed Durham NC remains committed to offering our neighbors tasty, nutrient-dense meals and access to healthy produce to keep them hopeful. 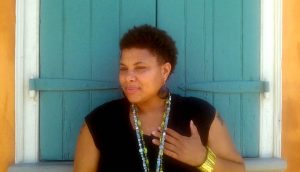 Katina Parker is a filmmaker, photographer, and writer living in North Carolina, who creates films for Samsung, NBC Digital, and Al Jazeera. Parker is also a Rockwood JustFilms Fellow, nominated by the Ford Foundation, and a former Black Public Media 360º Incubator Fellow. Parker is a 2016–17 recipient of the North Carolina Arts Council Artist Fellowship and a former instructor at the Center for Documentary Studies at Duke University.

In 2020, at the beginning of the pandemic, Parker founded Feed Durham NC, a scrappy mutual aid collective that came together in response to mounting hunger in the Durham area. To date, Feed Durham NC has provided tasty nutrient-dense meals for 15,000 people and has donated more than 35,000 pounds of farm-fresh chicken and produce to neighbors in need.

Parker serves as Co-Producer, Impact Producer, and Co-Director of A Love Supreme: Black, Queer and Christian in The South; and Director/Producer for Abolish ICE, documenting Southern-based Asian-American pushback against the targeted deportation of Black and Brown immigrants; Truth. Be. Told., a doc series about Queer Black Visionaries; and The Baba Chuck Tribute.

Parker is curating We Have a Duty to Fight for Our Freedom, a traveling exhibition about the Black Lives Matter Movement.

Previously, Parker served as a media strategist for the Gay and Lesbian Alliance Against Defamation and a social media consultant for Southerners on New Ground (SONG).

Parker received her MFA in Film Production from the University of Southern California and her MA in Speech Communications from Wake Forest University.

A Meal With a Side of Hope

After the Pandemic, Can a More Racially-Just, Equitable Documentary Field Emerge?