Back to the ROOTS of Critical Response

Finally. After years of experiencing ROOTS Week second hand – through direct accounts, benevolent gossip, and impassioned endorsements from dozens of friends and colleagues – I was finally there. I arrived with both excitement and trepidation, because the primary offering I was carrying, the Critical Response Process (CRP), was a method already well established as part of ROOTS culture. As one of two sites where CRP originator Liz Lerman first piloted this system for giving and getting critical feedback, ROOTS is at the roots of CRP. Indeed, as a community that has sustained its use for over 25 years, ROOTS may well be CRP’s longest running show.

Arriving with Liz and colleagues Paloma McGregor and Erika Moore to co-lead workshops and to help anchor facilitation in response to evening presentations, I was confident that our team had much to offer from our combined store of experience as CRP leaders in a vast array of communities, disciplines, and institutional contexts. But I also knew that ROOTS, with the awe-inspiring scope of its aggregate knowledge and deep commitment to dismantling oppression, had much to teach us. That said, we weren’t sure what we’d find in light of CRP’s inevitable evolution over a quarter century. Would we all be on the same page about the basics of how it’s done? There’s always a balance to be struck between our hope that CRP should live in abundance (Take it! Use it! Share it! Experiment with it! Try your own adaptations!) and the assurance that what goes by the name of Critical Response Process actually reflects the key principles on which it was founded — ideas like artist agency, the power of neutral inquiry, and the conviction that critique can be constructive, rigorous, progressive, and truly energizing for all participants.

Opportunities for learning were compounded by the quality and provocation of the performances on offer at evening showings during ROOTS Week — works like Lauren Hind’s Sexual Healing: A Live Documentary, confronting sexual assault, Nicole Gurgel-Seedfelt’s 900 Gallons, addressing legacies of whiteness, and Samuel Valdez’s And He Became A Man, relating the personal journey of a Latino disabled artist. The week’s UpROOTing Racism & Undoing Oppression workshops provided another powerful context for thought, conversation, and the application of CRP as we debriefed ROOTS’ initial foray into a home-grown approach into anti-oppression training. 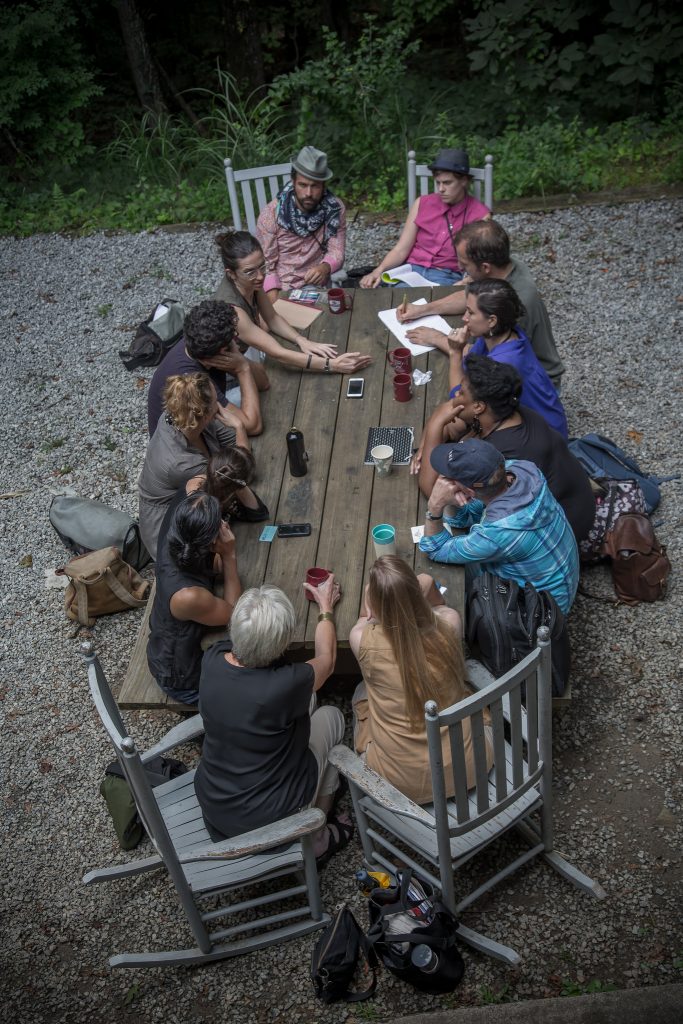 Artists and audience engage in a CRP in response to Mondo Bizarro’s The Way at Midnight. Photo: Melisa Cardona.

“But don’t we want to take care of the artist?” one participant asked.

It was a fair question, particularly as we took a measure of some of the work on view that week, with its dimensions of self-revelation, personal trial, and the re/enactment of individual or collective trauma and complicity. To perform such work can be a brave act; to follow its emotionally and physically draining exposure with the heightened moment of critical feedback compounds its inherent vulnerability. Which begs the question of whether a community of mutual support like ROOTS might well engage in some responsible caretaking. Moreover, when the evocation of trauma or the confirmation of complicity has the potential to trigger strong emotions in viewers, the question of caretaking expands from artists to audiences.

Preferences for what constitutes care or self-care (a term I heard frequently at ROOTS) can vary radically from person to person. When the moment calling for such caretaking intersects with the application of CRP, I recommend advice that Liz gave me early in my practice of CRP: just let the Process do its work. Without over-coddling or undue delicacy, the invitation of step one for statements of each individual’s personal experience of the work, offered in good will with the reminder that nothing is too small to be worth naming, will usually confirm the communicative aspect of the art on view and give air to vital emotions and meaningful connections. Often, for the artist, it is affirmation, but we’ll probably get to affirmation better by not framing it as the primary task.

A case in point on the mutual learning front is step one of CRP, where responders tell artists what’s exciting, meaningful, memorable, evocative, or provocative about the work they’ve put forward for consideration. When Liz first wrote about CRP, she called this step “Affirmations.” We knew that that’s how many in the ROOTS community still thought of step one, so we took time in our workshops to introduce its revised name, “Statements of Meaning.” We emphasized that step one is about giving witness to the work itself through personal reflection that for the moment filters out discomforts, rather than (as “affirmations” sometimes implied) using over-nurturing reassurance to take care of the artist.

With step one doing its work, here’s the test: can we hold both nurture and challenge within the same care-giving commitment to the artist? The rest of the CRP will give us the tools for interrogating the work and our reactions to it, sharpening critical thinking, and zeroing in on specifics. We just have to embrace the idea that “care” encompasses more than coddling.

Nowhere have I had so keen a sense that I’m facilitating the facilitators, and having so many chances to receive and witness excellent facilitation, in the context of various group processes, story circles, and the UpROOTing Racism work. I found myself wondering what facilitation skills and methods stay constant across the range of activities and which need to be tailored to the activity at hand. Techniques like repetition or restatement of a participant’s comment, or highlighting connections to bring forward unifying themes in the conversation may be illuminating in one context, counter-productive in another.

And I found myself with questions about speaking order within group dialogues. Unless guided by a technique like the talking stick or the dictates of a structure like the story circle, what principle should prevail? Do we abide by a strict rule of calling on people in the order that their hands go up, do we proceed around the circle in sequence, or is the facilitator actively making some judgments about who to call on? This last approach involves the consideration of such factors as who has already spoken, who is used to exercising privilege and thus may be more aggressively inserting himself (pronoun intentional), and who has contributed constructively at an earlier point and might be encouraged to continue their line of inquiry or commentary. I’ve seen some deft and graciously managed facilitation at ROOTS that follows the principle of calling on raised hands in order. In my practice as a CRP facilitator, however, I rely heavily on the judgment call, which becomes more important in larger groups. I’m increasingly recognizing that this is an exercise of power that can never be entirely free of bias, and can be problematic for me as I seek to undo some middle-aged white male habits. It’s a work in progress where I’m relying on cues from the artist and guidance from co-facilitators to aid my approach.

Sometimes when people are seeking an alternative to troublesome old methods of critique they bring the supposition that judgment is bad and curiosity is good. Regarding the first half of that formulation, I get it. Unchecked judgment or judgment that slides from an assessment of the work in progress into the personal can leave us feeling battered and antagonized. But for several years now I’ve been countering that CRP is not a judgment-free zone. We want to engage capacities for judgment when we are seeking the path forward on work in progress. What the steps of CRP allow both responders and artists to do is to manage our impulses toward judgment, check our assumptions through neutral questions, and selectively gauge the value of our opinions. Like the creative process itself, CRP calls on us to engage and suspend judgment, doing each when it best benefits the cultivation of the work. At ROOTS, thanks to the insights of my colleague Erika Moore, I began to see that a similar principle applies to curiosity, which I’d previously been inclined to encourage in abundance.  Curiosity is a good thing in cultivating our interest and drawing the connections between what’s known and unknown to us in the world the artist presents. But how we channel that curiosity into the conversation is best guided by what’s going to support the development of the work under consideration. Inquiries into deep background or broad speculation into future possibilities may convey your investment in the artist, but might not be the best use of the always-limited time we have for CRP. Untrammeled expression of curiosity can be as unproductive as unbridled venting of judgment. As with judgment, we may serve the task of feedback best when we exercise the capacity to engage and suspend curiosity. 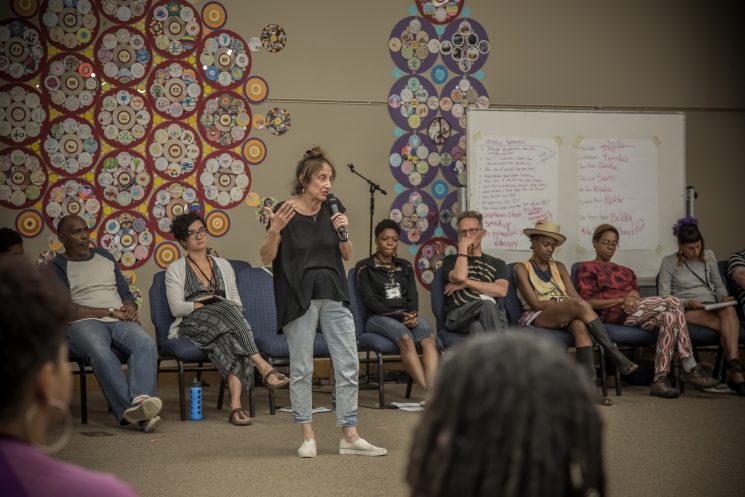 Onward at the Intersections

Inevitably for a process that grew in tandem with community practice and that seeks to counter some of the hierarchical habits of conventional critique, there have been questions from the beginning about CRP’s relevance to arts activism and the possibility that it has its own inherent cultural bias. As evidenced by our encounters at ROOTS, the abounding questions are only more pointed in our current climate of deep scrutiny into systematized oppression: How is power exercised or checked in CRP? Where might the dynamics of privilege play out or be countered in the structure of the process or how it is used? Does CRP’s construction of time reflect a “time-is-money” capitalist mindset, or does it afford a chance to slow down and give needed consideration to essentials? Does the neutrality of CRP’s step three ever constitute a form of silencing or erasure, or is it a helpful tool for diffusing the trigger responses that can undermine civil conversation? What’s the relationship between feedback on work in progress, civic dialogue, and the quest for justice? What are the scope and limits of CRP when it is brought to the intersection of those functions, and how might it be augmented or adapted? All of these are questions to which Liz and team are giving deep consideration as we cultivate a core of practitioners and advisors around Liz’s home base at Arizona State University and work on a new book about the Process. Honoring Alternate ROOTS’ key role in the genesis and history of CRP, we welcome reflection on those topics from members of the ROOTS community. May the mutual learning continue!

John Borstel is a maker, writer, and facilitator of experiences in learning and critique. Co-author of Liz Lerman’s Critical Response Process, a method for getting feedback on anything you make, from dance to dessert, he has been working with Liz Lerman since 1993 and learning from her since 1979. He can be contacted at john@lizlerman.com.