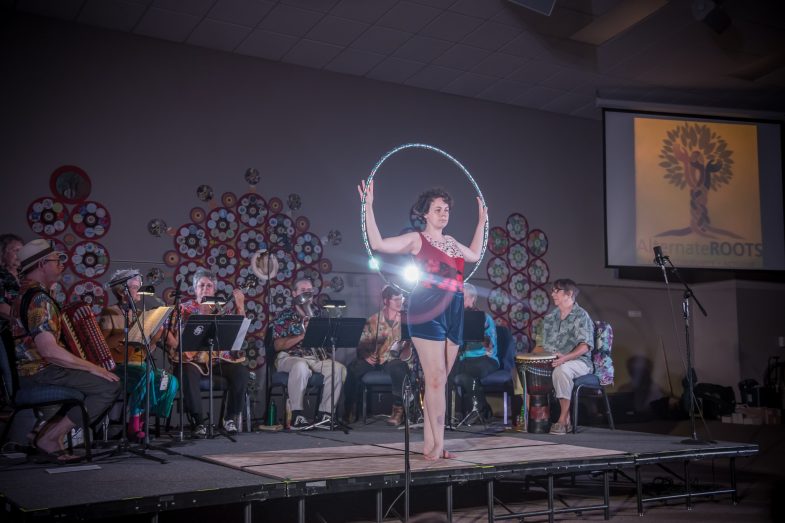 Vaudeville occupies a not insignificant place in the history of ROOTS, but before we address this particular topic, I believe a short, but brief, history is in order.

From roughly 1880 to 1930, Vaudeville was the most important form of popular entertainment in the United States in terms of ubiquity (even the smallest town would likely have a Vaudeville house) and employment (at its peak, as many as 50,000 people made their living in Vaudeville). It drew from a variety of sources including circuses, concert saloons, “legitimate” theatre, medicine shows, minstrel shows, music halls, “Wild West” shows, and Yiddish theatre.

Vaudeville was “clean” entertainment, designed to appeal to the widest possible audience. The Vaudeville establishment enforced this stricture, often ruthlessly. And, in keeping with the times, Vaudeville was segregated, with distinct White and Black circuits. Black “headliners” did periodically cross over and perform for White audiences, but that was not the norm.

But, for me, the most salient feature of Vaudeville was its amazingly democratic format. If you could create an act (standard, specialty, or just plain bizarre) that people would pay to see, you could make a living. And some people of my generation, who grew up watching the great TV variety shows of the 1950s-80s, latched onto that ethos with considerable gusto. It was called “New Vaudeville.”

History of Vaudeville at ROOTS 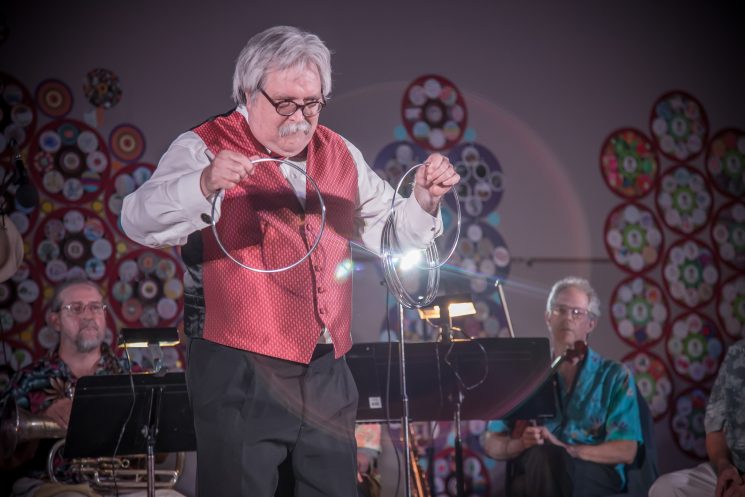 Alternate R.O.O.T.S. was established in 1976, and within a year Vaudeville entertainers regularly turned up at ROOTS events. I recall that we had a particularly excellent representation of mimes, jugglers, and, later on, tap dancers.

[Editorial Sidebar – Since I would surely leave someone out, and I have no intention of slighting anyone, I have elected not to attempt to list the names of specific artists and companies. Sorry about that. Although it would be a pretty awesome list.]

Some Vaudevillians who aligned themselves with ROOTS did so more as fellow travellers than as agents of social change. We considered ourselves primarily entertainers, but shared activist values. ROOTS was an organization we wanted to affiliate with and ROOTers were people we definitely needed to see more of. Plus, ROOTS events were usually loads of fun.

Vaudeville really found its place in ROOTS when the late, great Benny Reehl, an old pal and founder of the New England Vaudeville Festival, began coming to Annual Meetings (now ROOTS Week). He produced and directed actual shows, incorporating all interested ROOTers, some of whom, while clueless about Vaudeville, nonetheless managed to concoct an acceptable act on the fly. Benny was especially renowned for his construction of the “Hellzapoppin’” finales (a fine example of which we saw at the 2017 ROOTS Week). The resulting performances were epic manifestations of the ROOTS Prime Directive: “Who comes, is.”

And, in my view, they represented the pinnacle of Vaudeville at ROOTS. The last ROOTS Vaudeville Extravaganza took place in 1998 and it would be 19 years before the format was revived. But Vaudeville performers are nothing if not resilient, so we migrated to the wee hours, finding a ROOTS performing home at the legendary Café Bizzoso and, more recently, Late Night.

[Editorial Sidebar – I actually have a bit of difficulty reconciling the idea of “Vaudeville as activism.” The most compelling case I can make is that the Vaudeville show structure lends itself perfectly to possibilities for inclusion. My experience at ROOTS, as well as in many other communities, is that virtually anyone who is interested can be part of a Vaudeville production, regardless of their artistic background. Inclusion as activism?  It definitely is democratic.]

Vaudeville and the Intersection of Social Justice 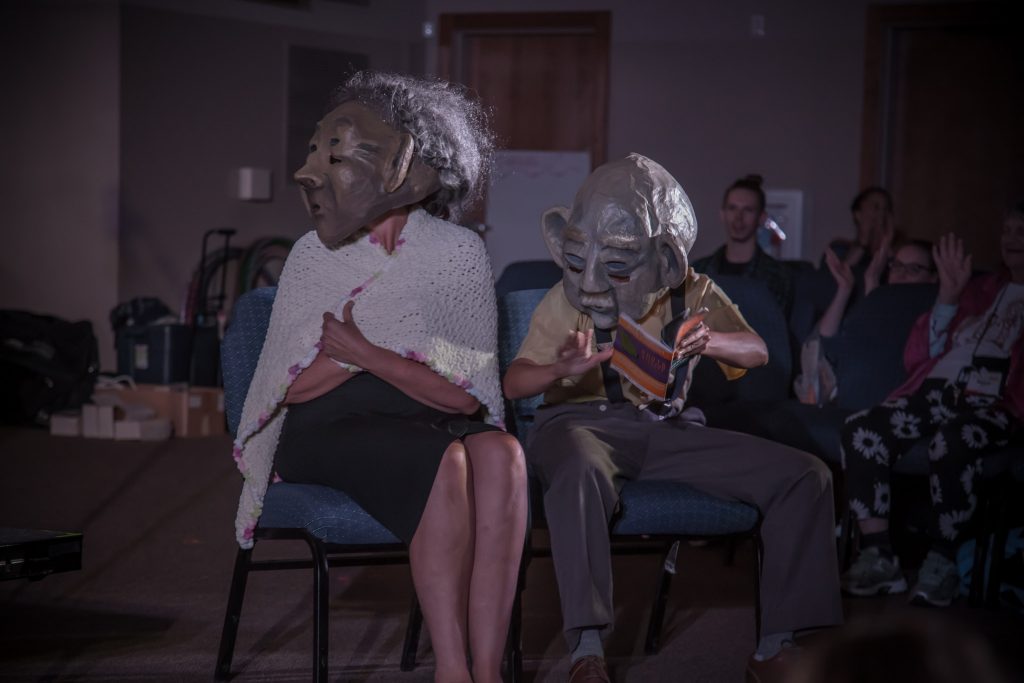 Vaudeville developed and prospered within a segregated and racist society and so reflected those attitudes. Black Vaudevillians were systematically denied opportunities afforded White performers. But Vaudeville was primarily about making money. At a time when a worker’s annual income averaged $650, a journeyman Vaudevillian could make many times that amount, and Vaudeville stars pulled in some truly big bucks. Economic imperative meant appealing to a wide audience, and since Vaudeville audiences were not necessarily sophisticated, acts based on broad ethnic humor were popular. Especially minstrel acts.

[Uncomfortable Cultural Sidebar – Minstrelsy is a complicated and fraught topic, but for a comprehensive, scathing, and pretty entertaining overview, I recommend “Bamboozled,” a Spike Lee Joint, released in 2000.]

Short version: Minstrelsy was invented by Thomas D. Rice, a White man and creator of the character “Jim Crow.” It consists of stereotypical, dehumanizing depictions, via song, dance, and comedy, of “darkies” and the “joys” of plantation life; in short, minstrelsy conveniently ignored the horrors of slavery in order to provide “nostalgic” entertainment. White audiences loved this stuff, and since that’s where the money was, many Vaudeville performers, mostly White but some Black as well, donned the burnt cork blackface, painted their lips red in grotesque exaggeration, and hit the boards.

Among Black Vaudevillians, however, another dynamic was at work. Largely denied access (again, with the exception of a few major stars), to the opportunities afforded White Vaudevillians and confined to the Negro Vaudeville (aka, TOBA or “Tough On Black Asses”) circuit, some Black folks formed their own production companies, wrote their own shows, and hired their own actors, writers, musicians, and stagehands, thus giving young talent a place to develop. Two examples:

The Williams and Walker Company Productions

Founded by George Walker, with his partner, the incomparable Bert Williams.

“Figuring out how many families that would support. Then look at the multifaceted talent we are employing and encouraging. Now, do you see us in the light of a race institution?”  George Walker

In 1903 “In Dahomey” became the first full-length African-themed musical comedy and broke the color line on Broadway (Music by Will Marion Cook, lyrics by Paul Laurence Dunbar, book by Jesse A. Shipp). Walker also founded the Colored Vaudeville Benevolent Association.

Owned their own production company and were the highest paid act on the TOBA circuit.

True story: In 1904 at the White-owned Jefferson Theatre in Birmingham, AL, Mabel Whitman informs the management that The Whitman Sisters will not perform unless the theatre opens up its dress circle and orchestra seats to a Black audience (typically assigned to the balcony). Faced with major, unpleasant financial ramifications, the management complies. Don’t mess with Mabel Whitman.

Regrettably, the stories of The Whitman Sisters and many other Black Vaudevillians have been negligently documented and largely lost to history, which is decidedly not the case for their White counterparts.

It is worth noting that there were instances of White people in Vaudeville championing their Black compatriots in the face of institutionalized racism. But I think it fair to say that the most meaningful intersections of Vaudeville and social justice occurred when Black Vaudevillians, responding to the racism and institutional prejudices of the day, created their own institutions and support systems designed to meet their particular needs. 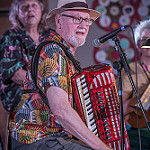 Rodger French is an accomplished piano accordionist, juggler, and bandleader. He has been a member of ROOTS since 1977 and has served on the Board of Directors in several capacities. Though not recently. His ROOTS career includes credits with Lenny & LaBanana and The DeLuxe Vaudeville Orchestra (which he founded with the help of a ROOTS Artistic Assistance grant). There are a lot of other things worth mentioning. Another time, perhaps.