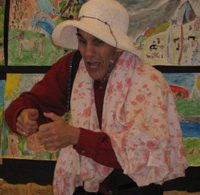 About the Artist:
Barry Stewart Mann is an Atlanta-based actor, storyteller, writer and educator.  He has a BA from Harvard and an MFA from the University of San Diego, and has been working in theatre, storytelling, and arts education for three decades. He is a world traveler, conversant in several languages, and brings a ‘global citizen’ outlook to his work.  He performs and teaches through the Alliance Theatre, Young Audiences, Lesley University, and the Atlanta Partnership for Arts in Learning.  Barry customizes programs, workshops and residencies for schools and communities, and strives to address issues of equity and justice through the stories and drama that underlie our shared cultures and imbue our lives. He was named the 1999 “National Storyteller of the Year”; his stories have been heard on public radio stations in many parts of the country through the “Recess!” program; and he has been commissioned to create living history pieces by the Jimmy Carter Presidential Library and the California Council for the Humanities.  Barry was recently one of two U.S. tellers featured at the Festival Internacional de Cuentacuentos in Santo Domingo, Dominican Republic.  Since 2008, Barry has worked with the Prime Time Family Reading Time Program through the Dekalb County Public Libraries.