Breathing Room for Something Unstoppable 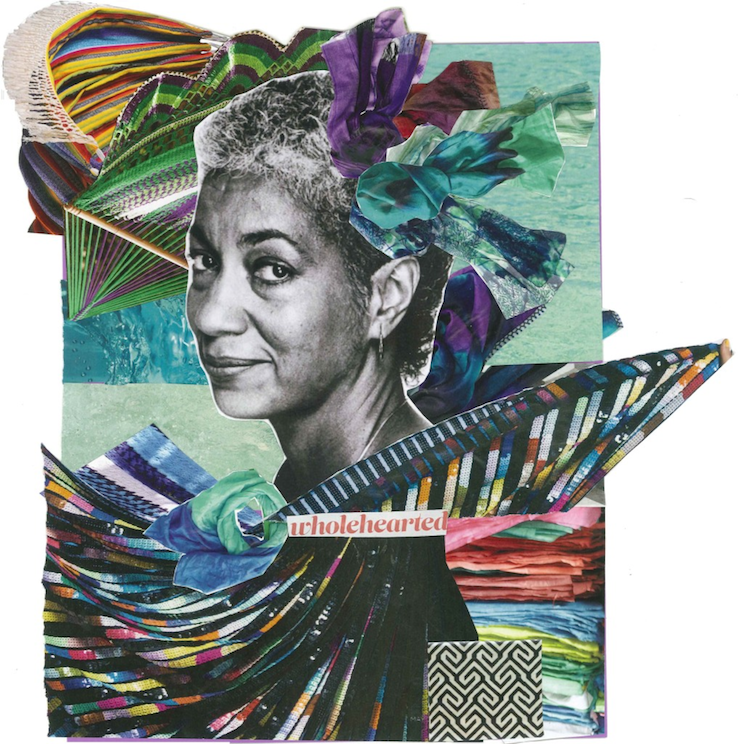 Dedicated to Eric Garner*
And to Margaret Garner’s Daughter**

return to the place
where you learned
how to breathe

where night washed itself
into your dreams

return
to the place
where you learned 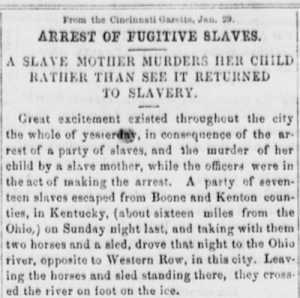 *Eric Garner was a cherished family member and friend to many. He died unarmed in a police chokehold in Staten Island. His last words, immortalized on video, were “I can’t breathe.” One week after a grand jury in Ferguson decided not to indict the police officer who shot Mike Brown, an unarmed teenager (and left his body in the street for 4 hours), a New York grand jury decided not to indict the police officers who choked Eric Garner to death.

**Margaret Garner was a cherished family member and friend. After escaping slavery and moving to Ohio, Margaret Garner’s family was targeted by the fugitive slave act which allowed anyone suspected of escaping slavery to be kidnapped and sold back into slavery even if they were living in states were slavery was not legal at the time. When a group of white men sought to take Margaret Garner and her family into custody she killed her 2 year old daughter while attempting to kill herself and all of her 4 children. In the ensuing trial (not for murder but for destruction of potential property) she explained that she could not allow her daughter to endure the horrors she herself had already endured in slavery. Margaret Garner’s story is the inspiration for Toni Morrison’s novel Beloved.

Black Life Matters. Patrisse Cullors, Alicia Garza, and Opal Tometi created this portable affirmation as a hashtag and then as a rallying cry as they organized direct actions to respond to the deaths of black people at the hands of police and vigilante violence and surveillance. These visionary black queer women created this mantra as a response to both the highly publicized killings that have made national news over the past two years and the deaths of people in their own families and communities. Their simple articulation has become a technology of connection and accountability, speaking to many people who are impacted by the multiple forms of state violence that kill black people. The hashtag, t-shirts and events are inspiring individuals and groups of people to come together to demand and dream of an alternative.

#blacklivesmatter/#blacklifematters is a poetic act that invokes a tradition of black feminist and black queer and transnational poetic acts that transform rage, silence and violence into affirmation, love and action.

To engage the Black Love (whateverwhenever) Oracle that Eternal Summer of the Black Feminist Mind recorded in solidarity with the Black Lives Matter Freedom Rides to Ferguson which draw on black feminist, queer and Palestinian protest poems follow these links:

#whateverwhenever oracle day #1: We Need a God Who Bleeds Now from Alexis Pauline Gumbs on Vimeo.

“For My Own Protection” by Essex Hemphill

In this moment, after months of sustained direct action protest and the lifting up of Eric Garner’s tragic speech act in support of his own life “I can’t breathe.” Black queer feminist artists are continuing to activate breathing room in multiple ways as we collectively transform rage and frustration into sustainable transformative love.

Here are some examples, but there are many more!!!! 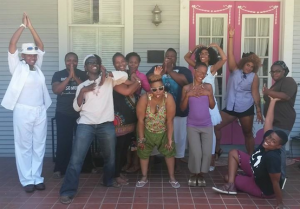 Black Feminist Breathing is a resilience practice I have been using for several years to tap into the wisdom of black revolutionary women and queer ancestors. The process includes chanting mantras derived from the  writing and speeches of people like June Jordan, Audre Lorde, Essex Hemphill, Fannie Lou Hamer and more. I started this practice as a personal meditation practice and then decided to share it as a healing and activating technology at in-person events and through a 21 day online experience called the Black Feminist Breathing Chorus which paired the mantras with music specifically composed by Sangodare and paired with a visual ritual of ancestral elevation which had about 1000 daily participants. You can see the visual art and hear some of the mantras at blackfeministbreathing.tumblr.com

This past July 4th weekend a group of black feminist healers, artists, cultural workers and visionaries gathered in Magnolia, Mississippi at the Flowering Lotus Retreat Center for the Black Feminist Breathing Retreat. We created sacred space to honor the 50th anniversary of Mississippi Freedom Summer and to activate breathing as a technology for our contemporary collective freedom journeys.

This February the Black Feminist Breathing project is installing “Breathing Back: A Meditation Chorus” from Feb 16-March 1st at the Carrack Modern Gallery in downtown Durham, NC. Throughout the exhibit there will be sound circles, mantra dance parties and more as part of the interactive installation. For more information email alexispauline@gmail.com

Parable of the Sower: The Opera

This month Toshi Reagon staged performances of her opera-in-process which is an adaptation of Octavia Butler’s prophetic science fiction novel Parable of the Sower  and a collaboration with her mother Bernice Johnson Reagon, founder of Sweet Honey in the Rock and movement music legend. 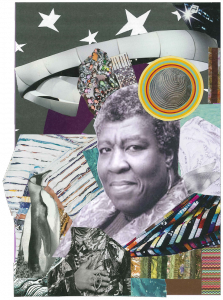 “My My My” Collage for Octavia Butler by Alexis Pauline Gumbs.

Reagon’s run of shows at the Public Theater this month served not only as a mother-daughter breathing ritual affirming our intergenerational freedom movement, not only as an ancestral awakening breathing life into the printed words of Octavia Butler (who died in 2006 at the age of 58 after falling on the sidewalk near her home while in the midst of writing a vampire trilogy), not only as an outloud expression of a decades old black feminist intersectional analysis of the consequences of the political, economic and environmental actions of humans, but ALSO as space of healing and renewal for black activists and cultural workers to re-center and connect to each other through art in New York City, where the ongoing actions of the state and the police force have created a context of dynamic tension.

Parable of the Sower recounts or predicts the journey of a black teenager who creates a transformation based doctrine based on the theology that “God is change.” May the transformation at the center of this work offer those of us facilitating the whirlwind to find inspiration, context and each other.

Gallery of the Streets

Eviction laws in North Carolina don’t give residents very much breathing room. Kai Barrow, activist, artist and theorist, received notice that she would have to leave her home after she transformed it into an installation called ecohybridity, a visual opera. Created in a frenetic process of invoking ancestors and ancestral texts, from jazz sounds to the memory of Marsha P. Johnson, ecohybridity engages Barrow’s ongoing activism and theorizing about nomadic black geographies and the politics of displacement (although at the outset of the project she didn’t know that she would be displaced). 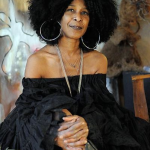 Now compelled to embark on a shoestring budget tour, Kai Barrow is gathering and mentoring younger queer artists and through the ecohybridity process they are reclaiming space in communities across the United States to invoke ancestors (especially the specters of black women blues singers, artists, activists and goddesses) and to express desires. Dedicated to spatial justice and the possibility of a human evolution point to a sustainable nomadic existence accountable to the needs of the perpetually displaced, Barrow has been experimenting with dignity in transience, honesty in the spaces between and the transformative impact of making the usually hidden epidemic of eviction (which for black women is equal to the rates of incarceration for black men…a sinister synchronicity) VISIBLE.

Taja Lindley and Jessica Valoris are cultural workers and adornment specialists who have created a mixtape that recontextualizes some of the most ubiquitous contemporary hip hop songs and transforms them into holistic affirmations of women of color. In addition to the mixtape the duo curates a series of interviews entitled “On Her Hustle” and they also perform and facilitate workshops and events on campuses and at conferences around the U.S.

Colored Girls Hustle gives new meaning to the term “breath control.” Usually used to refer to an emcee’s ability to flow for a long period of time with dynamic vocal range and emphasis without pausing to take a breath, Lindley and Valoris demonstrate lyrical skills and inspiring performances while also bringing the universe into alignment with references to ancestors and loved ones, self-care practices and afro-futurist visions.  Colored Girls Hustle breathes life into the cultural movements they participate in and suggests that in addition to a critique of mainstream capitalist hip hop messages, feminists of color can also reclaim sound and transform the familiar into the future we need! 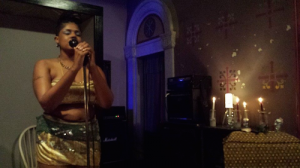 Joy KMT a self-identified mother of many, artist, activist, healer and lover, created Testify: A Black Womanhood series as a combination of words, images, energetic curation and community gathering space. Funded through the Advancing Pittsburgh Artists fund and the sale of necklaces that say “Testify” and “Immaculate Blackness,” this experiential art process celebrates the divinity of black women. In a context where the lives of black women and our work as creators of life, art, and transformation are devalued, Joy KMT’s “interactive poetic-shrine-ceremony” promises to “take audiences on a breathtaking journey of rage, grief, joy, and love as black women weave together a tapestry of experience through poetry, song, and audience interaction.”

I am personally the installation site of one of the beautiful chunky-fabulous mirror-bling “Immaculate Blackness” necklaces and in addition to the love-space that Joy KMT is creating for black women in Pittsburgh, through the dispersion of the piece all over the world through the necklaces she also transforms this discourses through which black women’s bodies are read into a one of reclamation and divine transformation.

This is just a snapshot of the unstoppable scream, laugh, bellow, sob, sigh, speech that is the collective work creative black women are unleashing on the planet. Take a deep breath. Our powerful, passionate presence is transforming the world. 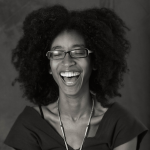 Alexis Pauline Gumbs, PhD is a queer black troublemaker, a black feminist love evangelist and a time traveller and space cadet. She is the founder of the Eternal Summer of the Black Feminist Mind, the co-creator of the Mobile Homecoming project, an experiential archive amplifying generations of LGBTQ brilliance and the author of the poetry collections 101 Things That Are Not True About the Most Famous Black Women Alive, Good Hair Gone Forever and Ogbe/Oyeku: Black Feminist Book of the Dead and Unborn. She is also the co-editor of the anthology Revolutionary Mothering: Love on the Frontlines which will be arriving in Fall 2015 from PM Press. Alexis is a cultural worker, creator, educator and activist in the tradition of generations of black women, including and especially Mama Nayo Watkins.