Cultural Equity: An Act of Remembering 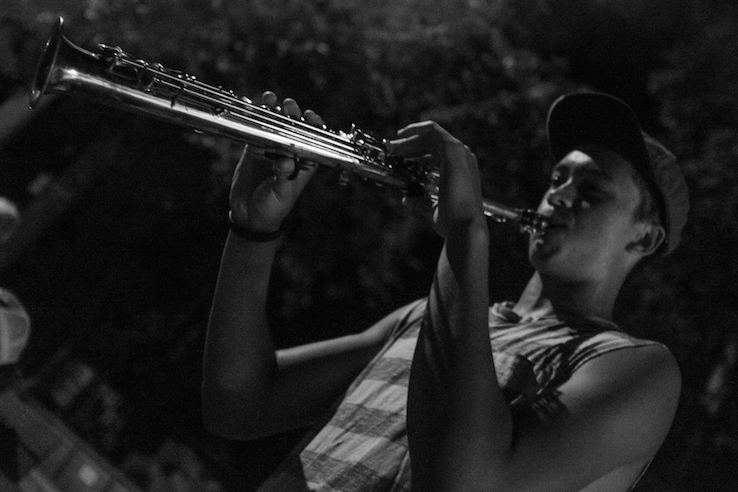 Editor’s Note: One of the things Alternate ROOTS is about is family, and we’re honored to publish a reflection on ROOTS Week by this family — Executive Committee Member Tamiko Ambrose Murray, her daughter Liana Ambrose-Murray, and son Logan Murray. 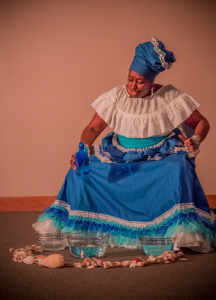 Liana: GOMELA, the most memorable performance for me, began with a calming sound that rushed up my spine in blue. My shoulders rolled back and my spine straightened as the ancestral light reminded my body of its own strength. The voice of Sunni Patterson entered the room like the sun rising quickly in the morning. The sounds of water, drums, poetry and women dancing in blue, yellow, and white skirts rose around the room. And later that night, the excitement still kept my back straight and shoulders high when a roundtable freestyle began in the dining hall. A song pulled right out of the ever changing community of Black men and women that surrounded me, we sat together, beating rhythms on the table, spittin’ out words and turning out butterflies from thin air. Two songs made of Black power, creativity, and love converged in many bodies in that one night. It was a reminder of the necessity for spaces where we share our art with one another, where Black people can just be our full selves.

Throughout ROOTS Week, I’m pulled back to May when I bear witness to my own son slammed face down on the concrete by a police officer. I have no idea that in a few moments my own wrists will be shackled in handcuffs and that my son and I will strain to see my daughter, now alone in a parking lot, angry and afraid, as my son and I are hauled away in a police car.

Only moments before, we’d left my grandfather’s porch with a promise to return the next day. He and Uncle Hank were going to take us on a tour of Eatonville and Winter Park, to learn more about the place my ancestors called home. We’d spent the evening listening to stories about the watermelons they grew in horticulture class at school, and how they snuck into the garden and ate them at night. They spoke of how the neighborhood had changed, and of how no one cared about cousin Zora’s* decaying house until the white folks found it worthy of notice.

Look here, Mr. Officer, we just came here to get a drink at the 7-Eleven.

Liana: I often choose to heal alone, through writing or my art — not publicly or in spaces with many people. But I’ve realized that ROOTS is the type of space for individual and collective healing. I am speaking for my own experience, as a black-identifying mixed-race woman — there’s a lot out there that I’m forced to fight every day, and I believe that ROOTS is moving towards preparing all people, those with more or less “privilege,” to fight that fight too. So that my mom or brother or me, and people like us don’t have to thank God that we weren’t shot down by police for just existing.

Logan: It’s been like this for hundreds of years. I’m not going to be stressing about something that happened because many people get arrested and they go to jail for a long time. Compared to what they have to go through, I wasn’t even worried about it. But I did feel paranoid and tense. It was humiliating. I didn’t like it, and I didn’t eat any of the food. I didn’t even want to wake up. I had no sense of time in the cell until getting out and seeing the sunlight for the first time. I was walking around the cell wondering when I was going to get out.

My son moved to Florida over a year ago to study recording arts and lives a few miles from my grandfather. Now I worry when he doesn’t pick up the phone. I do not want him to drive at night, or even during the day. Can you just come home please? So I can know you’re safe. I no longer care that my son lives in the place where my ancestors picked oranges from the groves. I don’t care that he lives a few miles from Zora’s house. I only want him to come home. This fear inhabits my body. It is a mother’s fear born long before my children and long before me.

I came to ROOTS Week with a need to heal myself and my family. Justice work is healing. Even still, in our work as artists and organizers to dismantle these structures of oppression, we are not exempt from harm. We are still vulnerable to a system that seeks to inhabit our minds and spirits and to destroy our bodies. 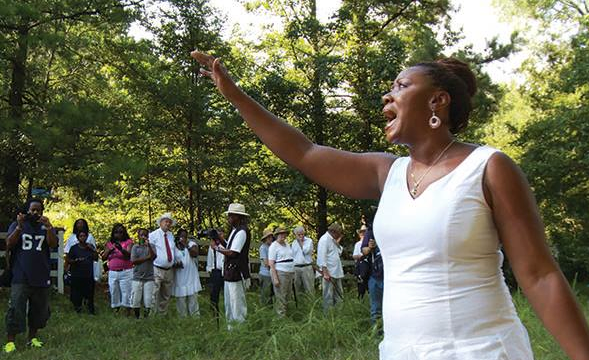 A still from “Always in Season” — a reenactment of a lynching in Monroe, GA.

Always in Season flickers on the screen when my son arrives at ROOTS. As we watch families and communities grieve the loss of loved ones to the atrocious act of lynching, I am filled with grief and gratitude at the same time. I do not know where to put this feeling. I can only squeeze my son’s hand.

Logan: Going back to ROOTS felt like I was coming home…back to a good place. Seeing everybody else’s expressions through their different art forms. It showed me that I am someone who has infinite potential. 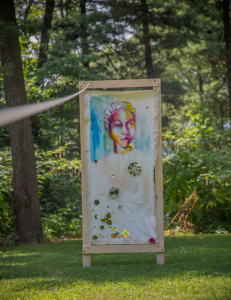 So often our stories are hijacked or erased, and cultural equity is the act of remembering. We must continue to share the stories of our ancestors, the places we are from, the pain we continue to endure and the traditions that have fed our resilience. Always in Season, a documentary film by Jacqueline Olive reminds me of how much we inherit the grief and trauma of our ancestors, along with the consequences of history repeating itself. Coming together to seek truth, to support each other and in the illumination of our art, stories, our songs, we reclaim our birthright to do more than exist. We have the right to thrive. I am so grateful to hear Collette Pichon Battle’s [Gulf South Rising]  recollection of the “hurricane parties” of her childhood. With no school for the children or work for the grown folks, her family weathered the storm with good food and drink and family time. These stories are just as important to hold as the state sanctioned violence that made a natural disaster a criminal act against so many Gulf Coast communities.

Liana: I feel like ROOTS is a place where these conversations can happen. It’s not one “group” educating another, not just give and take, but collaboration and introspective growth. For me it was about the little moments — like singing songs with the ROOTS babies before bringing them to the pool with Ms. Tutu, or exchanging stories with cool people, or figuring out that we are here to support each other — directly through making art, sharing space, and just seeing people unafraid to be themselves.

Serena Muthi Reed speaks of the collaboration with Angela Davis Johnson out of which the Hollerin Quiet was born, and the project’s intention to inspire meditation on Black love, Black visibility, and the need to speak the names of disappeared Black women. This space they have created is medicinal. 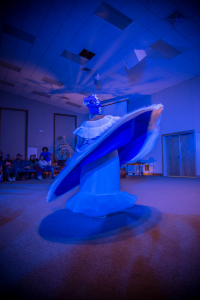 Logan: Sometimes at ROOTS I would feel observant and a little bit closed off. At other times I felt completely exposed, pouring out my soul to everybody who was there to witness. I felt like I was at home with my people. One of the last nights in particular that was awakening for me was when Shaka, Imhotep, and I linked together to create a New Orleans-style party that many people enjoyed with us. Hearing the music, as well as playing it, made my mind, body, and soul glow with invigoration, energy, happiness, joy, and a sense of strong connection to my true light. The beat of that drum carried my saxophone to a whole new level. The way back home was so clear to me after that night.

I am swept into a sacred space by GOMELA. I am grounded by the drum beat and suddenly aware of my own breath. My children are in the room. It is okay that I do not see them — I know they are safe. The fear and anxiety of the last months disappear into the folds of a sun-colored skirt, the poetry of a “mother tongue.” Three women dance “a journey between past and present.” I know this moment will be remembered.

In this work to illuminate our stories and to remind ourselves and the world that “all black lives matter,” there is much healing work to be done. We have to take care of ourselves and each other. We are healing from the inside out.

Logan “John Soultrane” Murray is a professional saxophonist, who has been playing jazz and other forms since the age of eight. Performing frequently in downtown Asheville, he has worked with many organizations including Youth at Jazz; the YMI, a historic Black arts and cultural center; and the LEAF Festival. He has also played in various bands including: the YMI Jazz band, Sol Rythums, Labsol, Southbound Turnaround, and as a youth guest performer with Preservation Hall. 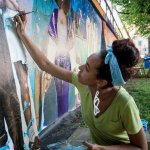 Liana Ambrose-Murray is a sophomore at Yale. Her prospective major is African-American studies concentrating on art. Liana is a visual artist currently expanding and experimenting creatively, delving into realms of music, creative writing, as well as fashion design and sewing. Her paintings have been exhibited in the Smithsonian and the Kennedy Center in DC, in Miami with YoungArts, and as a teaching artist at Little Black Pearl Art & Design Academy in Chicago. She continues to learn and work on imagining a future that intertwines her love for art, for her people, for children, and for finding solutions and new systems of education and rehabilitation/incarceration in this country.

Tamiko Ambrose Murray is a writer, a community-based social researcher, and an arts educator. She is the co-founder of Asheville Writers in the Schools and Community, the co-coordinator for the WNC Racial Equity Circle at the Center for Participatory Change, and is an adjunct professor of Literature and Language at UNC-Asheville.

One comment on “Cultural Equity: An Act of Remembering”