“Lord knows we’ll never be the same again, but at least we started telling the truth.”* A Report Back from Environment & Economy Day at ROOTS Week 2015 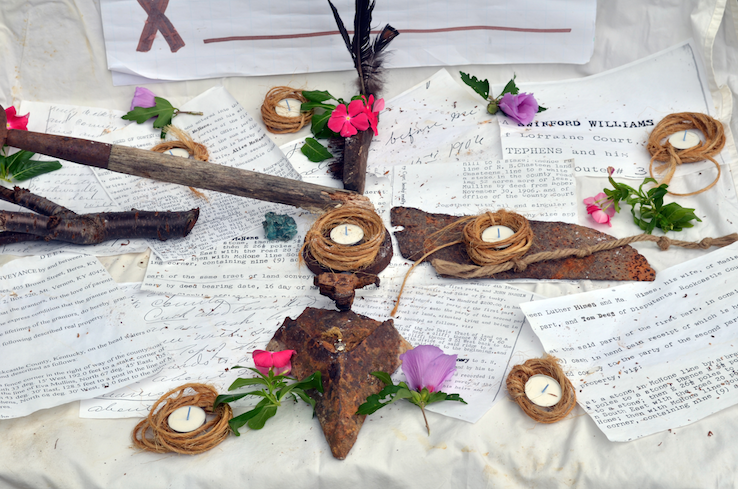 Land, Water, Food, Story altar installed by Clear Creek folks, created from copies of deeds to the land and rusty farm implements found on the land over the years. Photo: Nicole Garneau, 2015.

Editor’s Note: This ROOTS Week, within the larger theme of Transformation, we immersed ourselves in three particular issues: Environment & Economy, Migration/Immigration, and Cultural Equity with a focus on #BlackLivesMatter. Here, Executive Committee member Nicole Garneau offers us a collage of stories, quotes, and photos gathered from the keynote, Learning Exchanges,  film screening, and performances that comprised Environment and Economy day.

“We should all be able to thrive whether we like each other or not.”
–Colette Pichon Battle, Esq.

Colette Pichon Battle’s people have made their home in the Louisiana bayou for generations. They have seen lots of hurricanes. In fact, she reports that hurricanes were party time. The whole family gathered together to wait out the storm and the power outages, grownups enjoying a drink while the kids ran wild. But there was something different about the storm that hit in August 2005. The elders had never seen the water so high, and they issued an explicit charge to the younger folks to find out what was going on. That is what brought Colette back home to Louisiana from her corporate law job in Washington, D.C., and started her on a journey of discovery and action on behalf of the people and the land of the Gulf South. 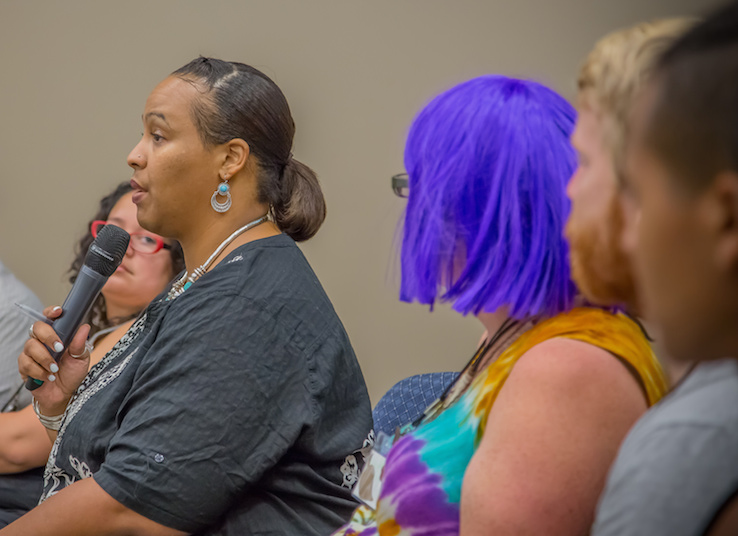 “All my grandparents worked in coal mining. All those health failures were normalized. As a teen I wondered why I had been born there. I was set up for failure. I got a scholarship to college and felt someone else deserved it. I failed out of school.”
–Story Circle Participant**

Devyn Creech never imagined she would be co-directing a play in her home community of Harlan county, Kentucky. For more than ten years, the Higher Ground project has developed a practice of using theater to tell urgent stories, and Devyn has been part of the process since 2011, when she was a teenager. They have explored the damage that prescription drug addiction has caused in their community and the many obstacles young people face in an economically under-resourced Appalachian mountain region. Their audiences have supported these difficult conversations. Devyn and Robert Gipe of the Appalachian Center at Southeast Community College report that “they didn’t even get too much backlash” when they put an openly gay couple in the play. Participating in Higher Ground offers young people a chance to feel that their Appalachian culture is celebrated. Previously, Devyn had been caught between her pride and love for where she was from and the much-repeated message that she would have to leave Harlan County if she actually wanted to accomplish anything. She says that performing with Higher Ground “was the first time I felt safe. I was proud of where I was from.” 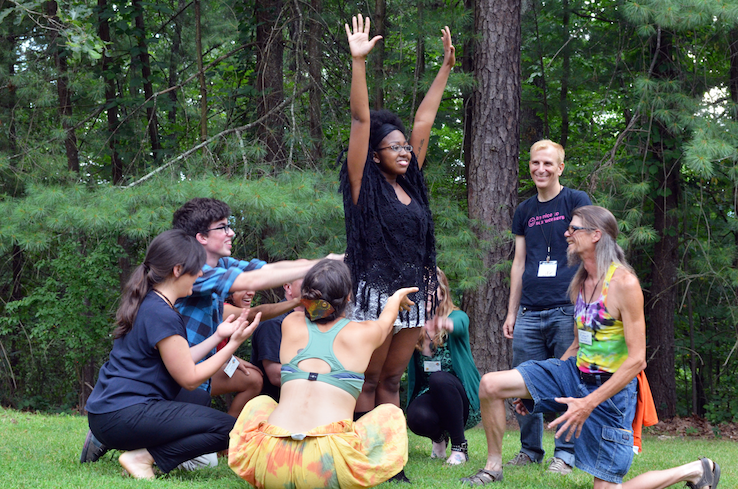 “I’m trying to figure out what my role is in the region—being Black in Appalachia.”

After inheriting the Clear Creek Festival from previous deed-holders to the land where they live and work, Bob Martin and Carrie Brunk wanted to listen more deeply to their community. Avid supporters of their local food economy, they wanted to use food as a central organizing tool and take advantage of their access to an amazing water source. The “Land, Water, Food, Story” project combined those elements into a performance piece used to dialogue with the earth, local farmers, creeks, and the inhabitants of their region. Structuring their work around land and food helped them offer theater in Rockcastle County, Kentucky, a place where theater is rare. In the summer of 2014, their performance culminated with a four-course locally sourced dinner for 150 people. In the winter of 2014, they and their neighbors were visited by energy corporations offering mineral rights contracts that could lead directly to natural gas fracking in the area. Community response to the possibility of fracking was swift, and is ongoing.

“Even if you don’t grow a whole garden you grow beans, tomatoes, and squashes.”
–Story Circle Participant** 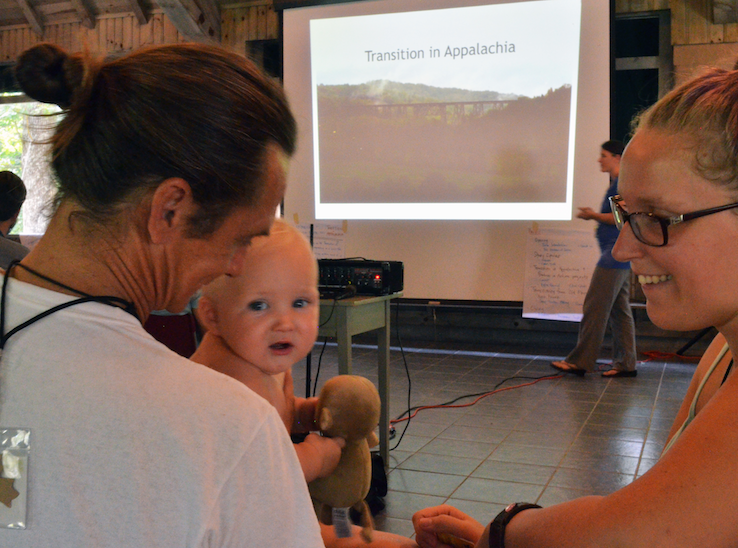 The ROOTS Week 2015 day dedicated to the theme of Environment & Economy was not only a day filled with colorful stories: it was a day of calls to get involved in the pressing work happening at the places where precious lives meet environmental destruction and exploitative economies:

~ Hurricane Katrina illuminated the way that some homes are constructed to protect certain populations and kill others. Whose bodies are permanently displaced, criminalized, starved of basic needs, and churned out in an economy that uses their labor for profit? Colette Pichon Battle calls us to action in solidarity with the Gulf South Rising Katrina 10 Week of Action.

~In his documentary, New Orleans: Recovery or Removal? Jordan Flaherty demands truth-telling about the race, class, and gender outlines of the reconstruction of New Orleans.

~ Devyn Creech now understands how critical it is to organize youth: “We are starting to understand we have to figure out what our future is—we can’t expect the older generation to show us that path.” She invited folks to the first-ever “It’s Good to Be Young in the Mountains” conference in Harlan, Kentucky.

~ Bob Martin and Carrie Brunk recognize that extraction is going to be hard to eradicate. They continue working to create a healthy, resilient community that can withstand multiple threats from extractive industry and violations to the land and to all living beings. They invite us down to the Clear Creek Festival, where “the art, the food, the ritual of our creative work can keep the community organizing in response to fracking from being only a ‘struggle against’ and allow it instead to be infused more and more deeply with 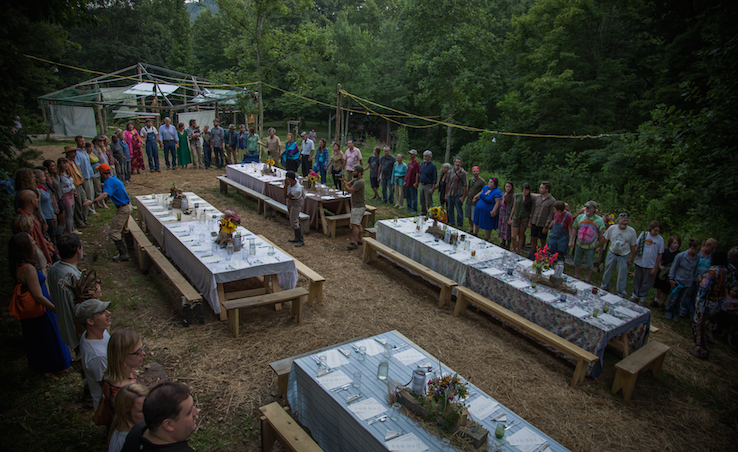 The closing feast of Land, Water, Food, Story, at Clear Creek in Kentucky. A portion of this performance was presented at ROOTS Week 2015. Photo: Melisa Cardona, 2014.

Alternate ROOTS members are dedicating their lives and work to critical environmental and economic struggles all over the U.S. South. Focusing on two regions in which the work is immediate — the Gulf South marking 10 years since Hurricane Katrina and 5 years since the BP Oil Spill, and the Appalachian region dealing with the interplay of coal and natural gas extraction — provides analytical and activist frames that all ROOTS members can use in relation to the pressing realities in our home communities. By telling the stories, singing the songs, sharing the images, and making the physical gestures, we activate our hearts and bodies in shared struggle.

*This line was spoken during the performance Higher Ground 5: Find a Way, created in partnership with Appalachian Media Institute of Appalshop & Higher Ground of Southeast Community Technical College.

** All story circle participants quoted in this article spoke these words during Beyond Coal & Toward New Power: Transition in Appalachia a Learning Exchange facilitated during ROOTS Week 2015 by Bob Martin, Carrie Brunk from Clear Creek Creative, community members from Clear Creek, as well as Robert Gipe and Devyn Creech from the collaborative project between Higher Ground, the Appalachian Media Institute of Appalshop, and the Southeast Community Technical College.

Nicole Garneau is an interdisciplinary artist making site-specific performance and project art that is directly political, critically conscious, and community building. She served on the board of directors of the National Performance Network from 2006-2012, and is currently on the Executive Committee of Alternate ROOTS. Nicole teaches in Women’s and Gender Studies at DePaul University. She holds a B.A. in Theater from the University of Illinois at Chicago and an M.A. in Interdisciplinary Art from Columbia College Chicago. She also teaches a variety of creative workshops, makes ceremonies, and practices healing. Her work is documented at nicolegarneau.com. Follow her on Twitter @nicolegarneau.