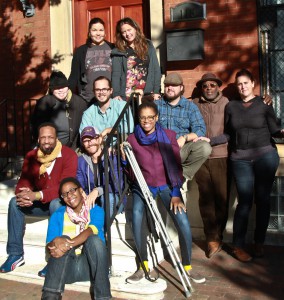 Your newly elected 2014-15 Executive Committee (ExComm) recently spent two-and-a-half jam packed days in Baltimore, MD engaging with community, eating tons of delicious food, getting some professional development and conducting the business of Alternate ROOTS. We wanted to let y’all know a little about what we did so you can stay connected and see what your thoughts are on some of the major pieces of our work.

We had an engaging and informative professional development session led by John Shibley of EmcArts, focusing on examining our personal and group team roles and exploring the Cynefin problem-solving framework. My favorite part was describing our best and worst team meeting behaviors by choosing cards depicting natural and human-made settings and then sharing our own personal reflections on other people’s choices. With a room full of creative thinkers, we were able to re-frame, challenge and deepen each other’s relationship to ideas of “best” and “worst” and offer what we bring and want out of our work together as your new Executive Committee: 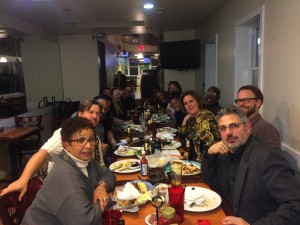 Continuing an ExComm strategy from last year to move our three Face to Face meetings around our member region to deepen our relationships, connect to local communities and support Rhizome events throughout the South; we’ve begun having each ExComm F2F in a current member’s home place. In Baltimore, we were hosted by Ashley Minner (and her family) at the Baltimore Indian Center near Fells Point in East Baltimore—thank you Ashley! Our first night in town we were treated to a delicious dinner at a neighborhood El Salvadorian restaurant, where the owner took personal care of our group. You can tell from the smiles on our faces we had good food and fellowship.  Also, big thanks to Ashley’s cousin Rosie Bowen who kept us well fed throughout the weekend with home-cooked catering that was clearly prepared with love. 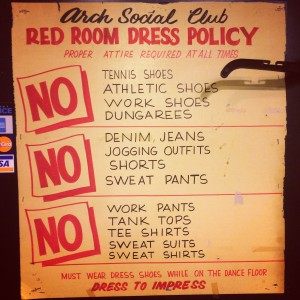 As most of you remember, in 2011 we presented ROOTS Fest and a National Learning Exchange in Baltimore, MD. This was our 35th Anniversary celebration, and it was also a furthering of a practice in the organization of supporting its membership by deeply investing in a local community and cultural organizing spearheaded by Ashley Milburn and Denise Johnson from Culture Works.  Culture Works had been engaged for a number of years with Hope Clark, Maurice Turner and Bob Leonard in using the principals of Resources for Social Change (RSC) in organizing a community response to the Highway to Nowhere in West Baltimore which resulted in ROOTS Fest 2011. At the Arch Social Club, a hundred year old organization dedicated to the uplift of the black community, we met with members of the community and local ROOTers who participated in the organizing or attended ROOTS fest. At the gathering, we witnessed a theatrical piece reflecting on how ROOTS Fest came to be, written and complied by Jaimie Haft, Dudley Cocke, Bob Leonard and Jon Catherwood-Ginn from transcribed conversations and critical reflections that followed the event. This piece, performed by local community members and ROOTers, served as a catalyst to form story-circles for all of us gathered at the Arch Social Club, where talked about our connection, memories and ideas related to the Highway to Nowhere and the festival. It was a moving event. The stories were powerful and for many, it was the first time the community had met and talked about the outcomes of ROOTS Fest since it happened.

Following an intense and rich discussion that ended with a call to continued movement building within the local community, the Executive Committee, along with assembled community members, ROOTers and friends, chowed down on delicious local crabs, barbecue, beer and dancing.  As we left we were gifted clothing from Brother Bakir from the social club, a spirited and knowledgeable elder who hosted and engaged with us all day long…amazing! 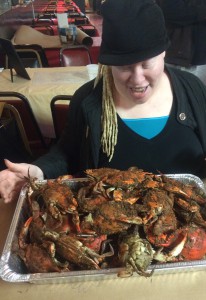 On our last day gathered together we spent an intensive day hashing through our goals for the upcoming year, debriefing the community meeting and beginning to vision ideas for our 40th Anniversary, coming up in 2016!!  We also formally approved our 2014/2015 budget celebrating with a dance jam to Michael Jackson and ended the day singing “we’re climbing up a mountain” outside in the sunny corridor of the Indian Center courtyard.  It was a jam packed yet productive weekend for your Executive Committee and we all left feeling good about the work we accomplished.

Now, we want to hear from you. We’re trying out new ways to stay connected to the membership through out the year and creating new ways for y’all to speak to us about your ideas and thoughts. Here are some things we’d love to hear from you:

Type, tweet or e-mail your responses below (you must be logged in on the site). We’re excited to hear from you and as always feel free to call or e-mail any of us to chat. We hope to see you somewhere around the region soon.