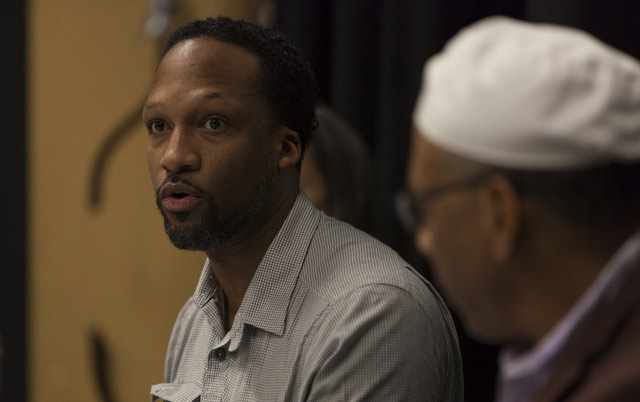 Carlton Turner spends a lot of time on the road, but he calls the South—Utica, Mississippi—home. The musician and working artist has spent 10 years working with Alternate Roots, a Southern-focused network of artist/activists. It’s work that’s taken him from studios and churches all the way to the White House, where’s he’s discussed cultural policy with members of the Obama administration. On November 15 in Dallas, Turner will talk about confronting racism with art at Facing Race, the biennial conference held by Race Forward, Colorlines’ publisher. Here, he discusses filling creative voids, the power of relationships and how we can better support young artists of color.

First off, tell me about the different hats you wear.

I came to Alternate Roots’ staff as an artist, and I continue to be an artist. [I’ve] worked with a group called M.U.G.A.B.E.E, which is Men Under Guidance Acting Before Early Extinction. I cofounded it with my brother, Maurice. We’ve been doing performing-arts and community-engagement work through long-term community residencies since 1996. That has been mostly based in music and theater but has also ventured to other paths. We take our cues from the local community.

When you started M.U.G.A.B.E.E., what void were you and your brother trying to fill?

The name comes from the idea that when we were growing up, black men were considered an endangered species. It was a time of the drug wars and gang wars and all the things that were continuing to dismantle [the] progress of black men. Much like what we’ve seen with Trayvon Martin and Jordan Davis, [black men] have been seen as a threat to the community. What we wanted to do was to bring about some positive music and art that could project a different type of black male presence, especially coming out of a Southern culture. We were beginning to see the fading of voices like Public Enemy and A Tribe Called Quest and the emergence of artists like Goodie Mob and Outkast, so we thought that our work could help bring a different type of voice from a black male perspective in the South than what we were seeing.

The South is sometimes ignored when we’re talking about arts and contemporary activism on a national scale. For you, what makes arts and activism so unique in the region?

I think about all forms of African-centered cultural expression and popular forms of art in the United States — music, theater, dance in the— all originating in some from Southern culture. In many ways it comes out of plantation culture— the fields, the hymns, the blues in soul and gospel music—and all those things that went on to create hip-hop, rock ‘n’ roll and R&B. If we’re talking about cultural legacy and cultural production, it goes hand-in-hand with the forced labor of African-Americans in the South. Those things are very connected to one another. Anything that we’re seeing today in pop culture originated in production you can trace back to black labor in the South.

What about contemporary activism?

In the South, we know that there can’t be any movement-shifting without building authentic relationships. The movement base in the South is about relationships. That’s why the church was such a strong part of the Civil Rights Movement, because people had long-standing relationships that traced back generations. It was easy to create a safety net for the movement. Those relationships don’t exist at the same level that they once did, so we’re seeing our movement base have issues with trying to be grounded and actually have a safe space.

How is that relevant to what we’re seeing now in black activism?

What’s happened in Ferguson—you saw police raiding a church. Police would never do that in the South during Jim Crow. Now, the Klan would burn churches down, and maybe some of those members were police officers, but they had to do it under the guise of a vigilante because it would be desecrating a safe and spiritually grounding space. Now, that doesn’t happen in the same way.

You travel often for your work and you’ve gone to the White House and spoken to the president’s team on culture. How do you think we can support young artists [of color] across the country?

Consistency, to me, is the missing element to a lot of the cultural practices we’re seeing across the country. We’d rather see a one-night performance than to see an artist engaged in a 10-year dialogue with the community because it’s hard to see how that manifests over time. I think what young artists could really benefit from is an open invitation to really engage with the community on a long-term basis. We’re stuck in this economic model of hustling for tour sites and trying to hustle [our] work in a marketplace that only values the transaction, but I think we really need to put more value in the actual relationships.