Healing, Endowed by Those Who Seek It or, Little Altars Everywhere

They say the best stories are made up of a whole bunch of truths that sound like lies.

Do you believe in the concept of energetic vortices? The notion that, whether due to the convergence of tectonic plates or underground streams or whatever geological phenomena, there are certain places on the planet where healing, life-renewing energy flows. 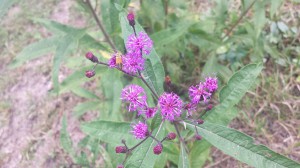 When I was at the Clear Creek Festival in the mountains outside of Berea, KY this weekend, I speculated to a friend that, if such a thing exists, the land on which the Festival happens is probably an energy vortex. Hours later, after he had learned more about the people there, heard some of the music, watched the children dance in the bubbles, and seen all of the altars in some of the most unexpected spaces, my friend, who tends to be more scientific-minded and less “woo-woo” than me, quipped that perhaps what makes Clear Creek such a healing space is that it has been so richly endowed by the people who visit it over time, bringing with them their blessings, their healing, and their need for healing. I vollied back that, perhaps, still it was originally the vortex that attracted people here, and then they made it stronger with the gifts they brought.

All are valid theories.

This much I know…I have come to mark time, the inevitable passage of seasons from summer into fall, with my annual journey to the Clear Creek Festival.

I always go there just a couple weeks after having wrapped up ROOTS Week. Even though my body is [mostly] recovered from having hosted the event, my brain is always still so tired I find myself moving through the world with a feeling like I’m experiencing life as a record being played at the wrong speed.

That is one of the reasons I go to the Clear Creek Festival. It’s an opportunity to commune with ROOTers and an entire other community of folks in a way that’s both similar and different from ROOTS Week.

Are we victims of our past?
Have we lost all connection?

Mitch Barrett song, “Is This Too Much To Ask?”

There’s just such a sweet spirit about the weekend. The generosity, the creativity, the collective intelligence. The little altars everywhere. Random poetry strewn around on trees and tabletops. It makes you start to see the place as embodying a sacred spirit, no matter what the source.

As is true with so many things, that spirit starts with its leaders, Bob and Carrie. They are both the very picture of equanimity. Their 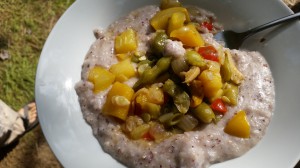 vision and clarity of purpose has made the festival grow into something you can just tell is more than one weekend for the community in which it resides. It’s a cornerstone, an anchor, a place to feel grounded.

I could go on and on about food vendors that will sell you crepes with mushrooms harvested that morning off a log behind their tent or workshops on poi spinning or what it’s like to dance in the rain as Mitch Barrett sings to a crowd of people who know all the words to all his songs, but why do that? All I can say is hitheeho to a sacred place that’s waiting for you this time next year. There’s absolutely no way you’ll regret it. 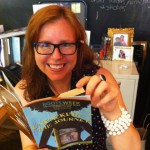 Shannon M. Turner is Manager of Programs & Services at Alternate ROOTS.  Along with her board service at WonderRoot, Shannon also blogs, writes poetry, performs, and tells a pretty good story, especially at Carapace on the 4th Tuesday of the month. Lately, she can be found Mondays at noon on the North Avenue Lounge on 91.1 WREK.