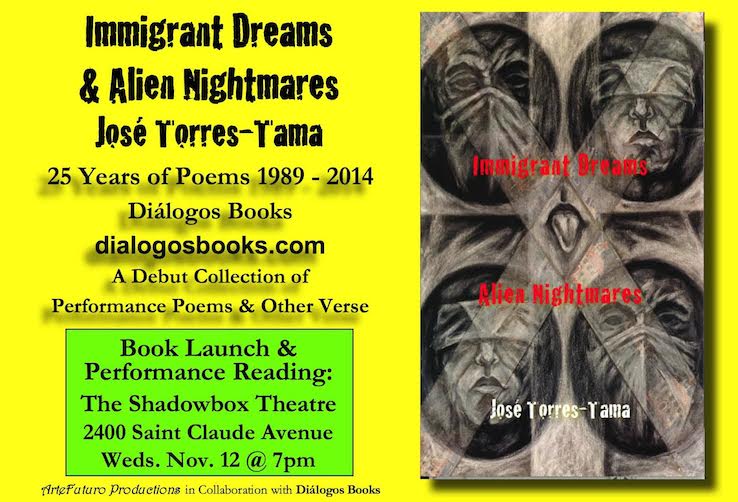 Alternate ROOTS congratulates member and Partner in Action José Torres-Tama, on the release of his first collection of poetry, Immigrant Dreams & Alien Nightmares. If you’re in New Orleans this week, you can attend the book’s launch at the Shadowbox Theatre on Wednesday, November 12th at 7 P.M. Copies of the book are available for purchase through the publisher, Diálogos Books.

Immigrant Dreams & Alien Nightmares is a debut collection that documents twenty-five years of José Torres-Tama’s performance poetry in his unique bilingual voice. Labeled a “Permanent Resident Alien” during his entry into GringoLandia at the age of 7 in 1968, he explores the psychic, physical, and open wounds of an Ecuadorian immigrant balancing two languages and cultures, challenging the United States to live up to its mythic ideals as the beacon of democracy. Inspired by writers like Ntozake Shange, Guillermo Gómez-Peña, and Martín Espada, his poems document migratory leaps from Guayaquil, Ecuador to New York City, where his family owned a coffee wagon business in Union Square, and Jersey City, where his teen-age rites of passage forged his urban warrior persona, to the Caribbean-influenced port city of New Orleans, his muse and adopted home since 1984.

Green, I feel a little alien green,
extraterrestrial green, My Favorite Martian green,
illegal without a green card, undocumented green,
distrustful snake green,
odious Othello jealous thespian green,
broccoli of the many meals we pick for you green.
Guacamole you can’t live without green!
Jalapeño rrrrrrevolution, here we come green!
Green of your painful greenbacks
that we earn with our green veins flushed
because of our resilient cactus green spirit
that will boycott the Arizona venom green inside
a law that leaks the puss green of infected minds
and polluted battery acid green souls!
But I know not all of you GRINGOS hate like that,
like that green greed that exploits immigrant labor,
and our green alien vulnerability,
as endangered as our swamp green of Louisiana,
threatened by British Petroleum logo green black oil spill
transforming the green blue waters of our gulf
into a Greenpeace emergency,
with their putrid green lies the oil has disappeared into
the green ecosphere jus like that!
!AY, CARAMBA!

I am… I am… I am…
I am the contact zone where copper fear transforms duty into hate.
You only know me through your Ray Bans,
and I become darker by the minute
because moonlight makes me shine from within.
But you only see a glowing target,
and you testify that God was talking through your barrel (ooohhh),
that your steel smoked with the absence of malice (ooohhh),
like another lover finished in your Dirty Harry hands (ooohhh).

I am… I am… I am.
You are the New World Order by a thin blue line where I will be judged
at a moment’s breath after a siren call for a TV crime.
Will I have the time to kiss my mother before I depart?

(Ooohhh) I am… I am… I am…
He may talk in sounds foreign to the mother tongue
or rap some slang beyond your reach,
as he drops a cadaver pose for asphalt chalk,
and your mission, if you decide to except it,
Mr. Feelgood in badge of courage by gang election,
shiny with righteous stuff and your breakfast Special K-K-K,
is to see whether his blood is as brown as his skin. 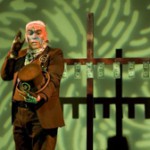