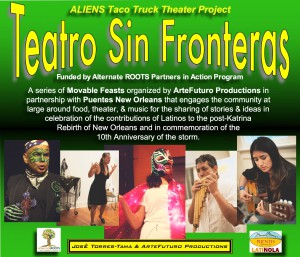 The ALIENS Taco Truck Theater Project / Teatro Sin Fronteras aims to transform a food vehicle into a theater on wheels to recognize the contributions of the Latinas/nos to the reconstruction and rebirth of post-Katrina New Orleans. Also, the mobile theater will address the current persecution and vilification of Latino immigrants during this dark era of anti-immigrant hysteria gripping the United States in the post-9/11 landscape.

The theater on wheels will cultivate the dramatic stories of members from the long-lasting Latino community in New Orleans and their survival through the storm, and the heroic tales of newly arrived Latino immigrant workers who have contributed tremendously to the physical reconstruction of New Orleans, and bring these stories to Lowe’s and Home Depot parking lots, churches, high schools—bringing the work directly to immigrant communities and crossing economical, geographical, and racial borders.

In partnership, with Puentes New Orleans, a not-for-profit and social justice organization, ArteFuturo Productions is developing a series of movable feasts called Teatro Sin Fronteras as part of immediate cultural events, where theater, music, and Latino foods will serve as catalysts to bring the Latino Diaspora of New Orleans together and develop movement building for the 10th anniversary of the storm.

We need to make sure that long-lasting Latino community and our newly arrived Latino immigrant workers, brothers and sisters, who have contributed their sweat and labor to the recovery, are counted and not left out of the post-storm narratives for the 10th anniversary.