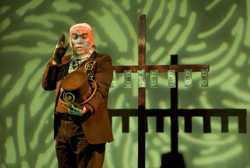 About the Artist:
José Torres-Tama explores the underbelly of the North American Dream mythology, the Latino immigrant experience, and the lingering legacy of white supremacist power structures in the United States. His interdisciplinary creative practices include spoken word poetry, critical essays, visual arts/installations, short films, and performance art. An NEA award recipient and Louisiana Theater Fellow, he received a 2010 Creation Fund from the National Performance Network for the commissioning of ALIENS, IMMIGRANTS & OTHER EVILDOERS, a sci-fi Latino noir and multimedia solo exploring the rise in hate crimes against immigrants in the U.S. His critically acclaimed post-Katrina performance The Cone of Uncertainty chronicles his dramatic escape from the flooded city on a stolen school bus three days after the levees breached.

Current Projects:
José’s performances thrive on an inventive fusion of bilingual texts, exaggerated characters, conceptual rituals, and film projections, creating spectacles that are visually dynamic and politically charged. His solos have been presented at Performance Space 122 in New York; Highways Performance Space in Los Angeles; GALA Hispanic Theatre in Washington, DC, the National Hispanic Cultural Center in Albuquerque; and the Contemporary Arts Center in New Orleans. In the academy, Cornell, Duke, Vanderbilt, the University of Michigan, and the University of Maryland are some of the many institutions that have staged his work and academic lectures on performance art and social change. A recent international tour included performance projects at Roehampton University in London, The Bluecoat Arts Centre in Liverpool, and the Center for Performance Research in Aberystwyth, Wales.

All stage productions are followed by a thirty-minute question and answer session with the artist, unless otherwise requested by the presenter.

*These prices do not include a $40.00 per diem and all travel and lodging expenses, which are the responsibility of the presenting organization.