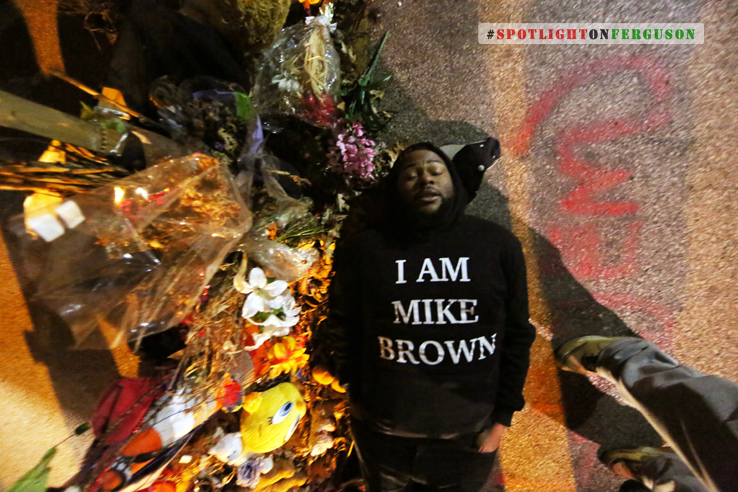 Since August, Katina Parker has been traveling to Ferguson, documenting and organizing against police brutality. Here, she shares a series of photo essays and her written, first-person account of the #Blacklivesmatter movement in Ferguson.

Today, I stood where 17-year old Mike Brown drew his last breath. Where the police left him lifeless. Bleeding. In the sun. On the street. For more than four hours. As an example to every neighbor, every friend, every loved one: “We can, we will snuff you out, with or without provocation.”

His blood, his body oils have seeped into the asphalt. Now covered by a makeshift memorial, straight down the middle of a residential road, crossing over into the left and right lanes. Aging flowers. Teddy bears. Candles. Photos. Hand-written notes. Cars driving up on the sidewalk. To preserve the growing tribute. And neighbors moving slowly, studying the bittersweet spectacle, still in shock.

While I was taking these photos, Mike Brown’s mother drove by. The depth of her sorrow weighs in her eyes, her teeth, her hair, her breath. She closed down the rally this morning because she was ready to march to the police station. She couldn’t take no more speeches. So we marched a good mile in the blazing sun. Shouting: “Hands up, Don’t Shoot!” They were waiting for us. With reinforcements. Standing in a line, a menacing front, behind caution strips, hands poised on tasers. Moments later, she said, let’s march some more. Maybe an hour later, she wanted to march again. And again. And again. Everyone obliged. Her body could not stop moving. When the marching is over, she has to go home. And there, with her husband, the sorrow, I imagine it engulfs her.

My feet burn from standing where that boy was murdered. My heart burns. My head burns. My hands. My tongue. I am fire. I am fury. I am convinced. No justice. No peace. If we can’t have it, we will shut this shit down. All the way down. 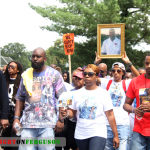 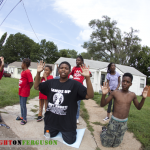 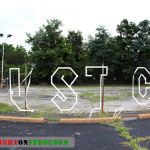 Current situation. St. Louis PD tear gassed us tonight. And arrested 20 people. There’s a certain sound the batons make when they advance, sounds like a whip cracking against a slave’s back. Then they shuffle march with shields, take your space, push you off the sidewalk and into the streets, tear gas you, lunge forward in armored vehicles. Hog tie you with one of a hundred zip ties suspended from a belt of many life-altering weapons. Shout at you over the PA. Warn you to go home or they will kill, I mean, arrest you. For peaceful assembly. Because you tired of seeing folks murdered and harassed. Tired of being in the line of fire. But we not done yet. We not done. 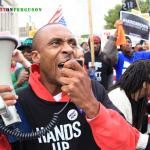 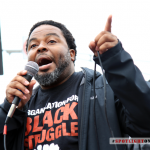 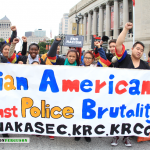 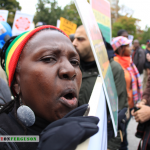 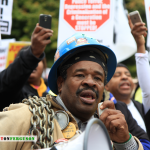 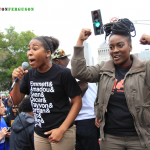 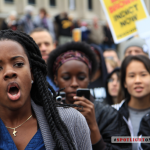 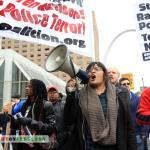 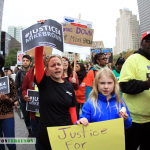 I am back at the hotel. Speechless. The shit I saw tonight. Deep breaths. As I type, the police have protestors trapped in the basement of Mokabe’s. Tear gassing them. Mokabe’s has been targeted by police because the owner allows protestors to have organizing meetings there – and she offers safe harbor.

My colleague watched police tear gas a woman who was having a heart attack and who was brought to them for help.

Mayhem everywhere. Buildings on fire. Car accidents in front of me. Police pinning people to the ground with automatic rifles.

My gas mask got snatched off my scalp. My phone got dropped. But my heart, my spirit, and my cameras remain on point. 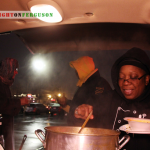 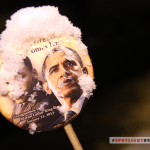 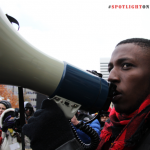 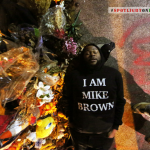 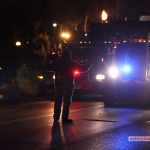 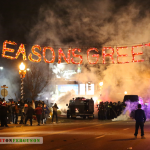 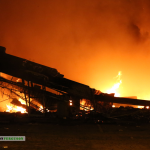 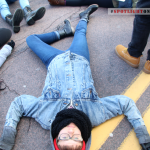 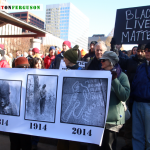 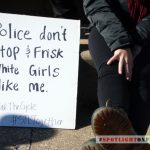 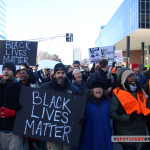 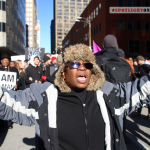 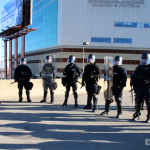 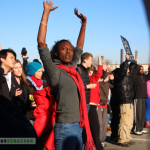 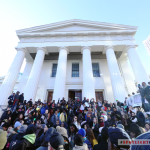 Katina Parker is a filmmaker, photographer, writer, graphic designer, cultural curator, social media expert, and communications consultant. Through her work she speaks to the multi-dynamic possibilities of technology and media to spark social and cultural change for voices who have traditionally been under-represented in media.

Born in Oklahoma City and raised in Wilmington, Delaware, she received her M.F.A. in Film Production from the University of Southern California and her B.A. in Speech Communications from Wake Forest University. Previously, she has been mentored by Inaugural Poet Maya Angelou, Poetry Legend Sonia Sanchez, Emmy Award-winning documentarian Alan Berliner, and veteran sitcom Director Peter Bonerz. Parker teaches social media and film through the Center for Documentary Studies (CDS) at Duke University. To follow her posts about Ferguson and beyond find her on Facebook, Vimeo and Twitter @katinaparker.