Next Gen: At the Intersection of Past, Present, and Future 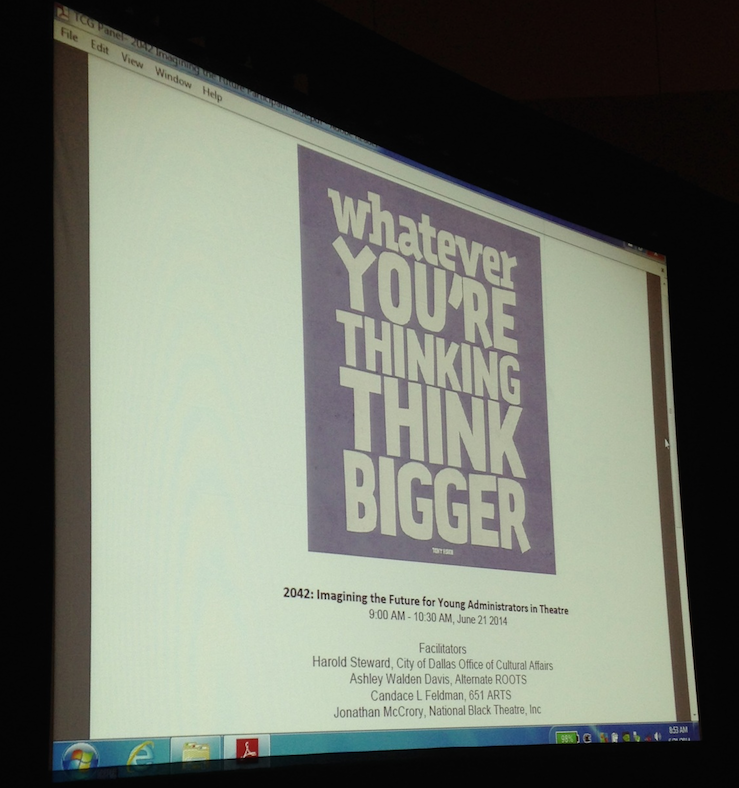 Next
is a futuristic conversation.
It’s talking about
the psychic space
of the future.

Next
is a stepping stone,
a progression–
it’s thinking about legacy.

Next
is a conversation with the
past,
present,
and future.

Next Gen
is a futuristic space
we’re creating
for artists &
arts administrators
to be liberated.

At its core, Next Generation National Arts Network (or Next Gen) is about cultivating a dynamic relationship between past, present, and future. As the baby boom generation of arts leaders retires, this coalition of over 100 under-40 artists and administrators, working nationally and internationally, is coming together to honor the legacy passed on to them while reimagining a more just and sustainable arts and culture landscape. Through workshops at national conferences and monthly learning calls — all of which are archived on an open google drive — Next Gen is, in the words of Alternate ROOTS’ Executive Director Carlton Turner, “defining for themselves what they need and actively organizing around those needs.”

When describing the activities of Next Gen I hesitate to use words like networking, resource sharing, and professional development, as they fall short in capturing the open-hearted, passionate, transformative vision for which this coalition is holding space. In conversation with two of the Next Gen’s leaders — Candace L Feldman, Associate Producer at 651 ARTS and Jonathan McCrory, Director of Theater Programming at the National Black Theater — these terms took on new meaning. Feldman and McCrory cracked open these words to reveal the beating hearts at their center. For Next Gen, networking is about finding your family, resource sharing is about galvanizing collective wisdom and power, and professional development is about claiming the artistry of administration. 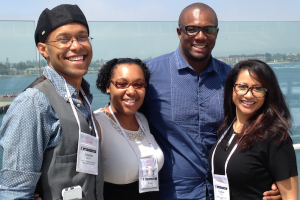 Next Gen emerged in late 2013 at the National Performance Network’s annual meeting. During the closed partner meeting attendees were invited to voice concerns about issues that they might be experiencing within their organizations with the hope that some of the peers in the room could help generate solutions. Harold Steward of the South Dallas Cultural Center shared that he would soon be transitioning into a greater leadership role, one for which he needed further preparation and peer support. Vicki Meeks, the soon-to-be departing Manager of South Dallas Cultural Center, rose to say that she too had similar feelings about transitioning into the next stage of her life and making sure the generation after her had the tools necessary to be prepared to take over her role. Steward and Meeks’ public declaration struck a chord with other emerging leaders in attendance and this generational shift in leadership would become one of the chief areas of concern for Next Gen.

Over lunch, a core group decided to gather to continue the conversation. NPN’s Mimi Zarsky offered her suite as a meeting place. Word spread throughout the conference. Ashley Walden Davis (Program Director, Alternate ROOTS ) and Jevon Collins (Program Director, The King Arts Complex) went door to door to all the other sessions inviting young administrators and artists to join. There is an energy to this story, as Feldman tells it:

“It started out with 3 people, and within 30 minutes it became 11 and then within five more minutes it was 15. We ended up with about 20 people in the room. And it was just people emoting: what it’s like being an artist or an arts administrator. People are scared. We see our elders just completely suffocated by frustration and the difficulty of keeping organizations alive and sustaining them. And that is concerning to us. Of course we want to lead, but do we want to lead knowing we are going to be stressed out the rest of our lives.”

A year and some odd months later, the concerns that brought Next Gen together continue to be their focus: resources for leadership transition, institutional memory, and self care. Under the leadership of Feldman, McCrory, Walden Davis, and Stewart the generational leadership shift that is underway is given a space. This space of transition is complicated, Feldman recognizes: “Do you pass the torch? Do you take the torch? Does the torch change?” Honoring institutional legacy and memory while also locating your place within it requires balance and deep reflection. “The wheel didn’t get invented because I’m on the scene,” McCrory says, “the new generation of leadership needs to cherish the legacy and stay humble within it, but also own it — not being dismissive of youth, [but recognizing that ] my wisdom comes from my connection to legacy.” McCrory refers to this space of inter-generational overlap as sacred and healing, and in so doing, points to the ways in which self care can be linked to and accessed through connections to legacy.

Video of Next Gen’s workshop at the National Performance Network’s 2014 annual meeting, courtesy of HowlRound.

While Next Gen honors the pioneers who built the institutions they are poised to lead, they are very clear that certain current practices are not serving the field. Chief among them are non-profit funding structures. Feldman is direct: “This non-profit structure. It’s not working anymore. It makes it very hard for the smaller organizations because we’re all going for the same piece of the pie. And that pie is only so big.” McCrory is equally as frank: “If I could think of anything for the future of the field it would be to transform and eradicate this crabs in a barrel mentality. This is what has stifled and hindered the manifestation of a lot of possibility.” Part of the Next Gen’s work is to bring artists and administrators together to envision more sustainable business models, and to usher in what Feldman calls “the age of generosity.”

In addition to re-imagining sustainability practices, Next Gen is also positioning themselves to be leaders in the field when it comes to diversity and cultural equity. At the 2014 Theater Communications Group Conference, Next Gen surveyed the 60 theater professionals who attended the group’s workshop. Of those present, Black administrators were paid at a lower rate than their white peers, and people of color with advanced degrees were not being promoted to executive roles. In the words of Feldman: “You can be Black, have an MFA, be completely qualified, and have so much time in the field, but you still will not get a position in executive leadership that a white male that is 30 some odd years old holding a bachelors degree will.” Armed with this research — including a second study they conducted at the 2014 NPN conference — Next Gen is looking ahead to action. For Feldman, addressing diversity is about accountability:

If you are interested in joining Next Gen’s game changing, liberatory coalition, you can connect via the group’s Facebook page, explore their google drive, and join them the third Tuesday of everything month for a learning call.

Nicole Gurgel is the Content Developer for Alternate ROOTS, a network of artists and cultural organizers in the South creating a better world together by working to dismantle all forms of oppression, everywhere. In addition to her work with ROOTS, Nicole is a writer, performance-maker, and community-based arts educator based in Albuquerque, NM. She holds an M.F.A. in Performance as Public Practice from The University of Texas at Austin.

Tagged with: Next Gen