If You Are A Rock, Then Stand Up Like A Mountain* 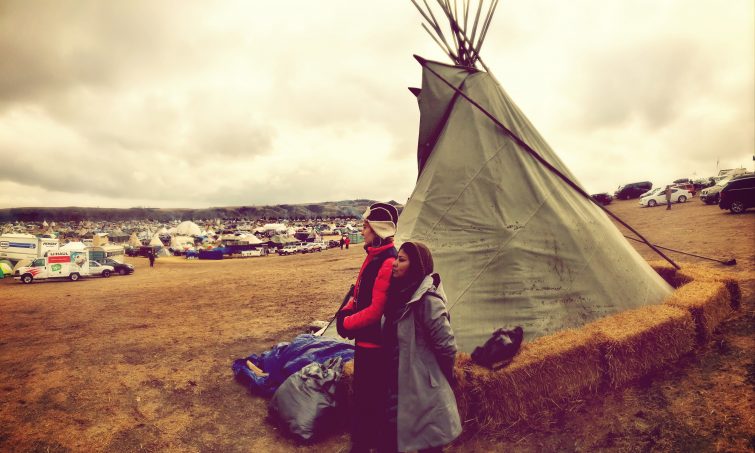 *The title is borrowed from this song by Trevor Hall, which was written to raise money for the Water Protectors at Standing Rock.

On Tuesday, January 24, the Trump Administration signed an Executive Order to advance the approval process needed to continue construction on the Dakota Access Pipeline. Our continued support of the Water Protectors is vital; learn more about how to take action here.

A few weeks before this year’s Thanksgiving, a day wrought with emotion and historical weight for many indigenous people of North America, my sister and I were invited to the grounds of the Standing Rock movement in Cannonball, North Dakota. We were on tour out west, busily booked with shows nightly in venues up and down the coast, and found ourselves with a few days off – precisely between November 23-26. We knew that this time was ripe to be in service for many of us around the country, and we were open to receiving what that would look like. The invitation came from three directions; from the Indigenous Youth Council (of Standing Rock), from our dear friend Lyla June Johnson (a descendant of the Diné and Tsétsêhéstâhese lineages, a good friend whom for months had been keeping us abreast of the movement), as well as from Climbing Poetree (our sisters and mentors in art and community building). Although we were really really tired from touring and many states away from North Dakota, those 3 synchronized invitations were the precise call to action that we needed to book plane tickets and get organized.

My first direct news of the Dakota Access Pipeline (DAPL) resistance efforts were back in August when a friend asked us to help spread word about the group of teenagers who were running 2,000 miles from Standing Rock to D.C. to raise awareness about the pipeline. From that point onwards, Rising Appalachia did what we could to share news stories, fundraise, invite speakers to our concerts, and lend our voice and outlet to the water protectors from afar. Many of the calls from the ground were for supplies and donations and word spreading much more than for more people to come to the site. There was so much to keep the camps going already, and we were sensitive to that important detail, so our organizing efforts were focused around outside support. 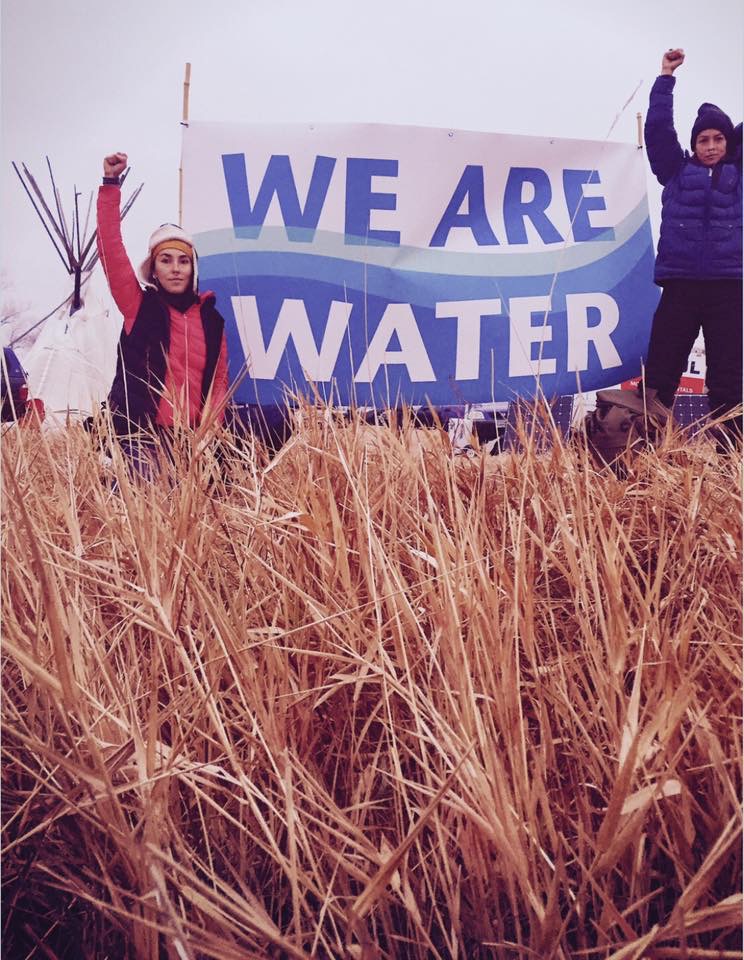 That changed this November when folks began reaching out about a ‘Women of the Medicine Wheel’ concert at Center Camp, Oceti Sakowin. The concert was organized to take place a few days after the horrific water cannon tactics were used on the water protectors in the extreme cold temperatures. The Indigenous Youth Council wanted to bring 4 women-led song-keepers of different ancestry to the main camp to lift spirits and offer prayer through music, something deep in the tradition of many people there. After many emails and phone calls and thrift store shopping for down jackets and hand warmers and calls for extra donations and booked flights and extra naps, the concert was organized and set and we were on our way. Climbing Poetree of Brooklyn, Saritah of Australia/Korea, Desirae Harp of the Wappo Nation of California, and us sisters of Rising Appalachia from the South. Seventh Generation Medicine Concert. November 23rd.

Arriving on site was starkly beautiful and breathtaking in so many ways that are hard to describe and will take months to process. It was a mix of excitement, fear, deep knowing, solidarity, anger, pride, and communion. The air was crisp and metallic. We were welcomed by very organized and positive greeters at the gate. Tipis with smoke coming out the top were mixed with Patagonia tents, yurts, and horse trailers. Artistically, there was so much color in the camps with all the flags of support from countless nations as well as banners and murals painted on various cars and buses. If Leah and I had thought enough in advance, we would have made an Alternate ROOTS banner and stuck it in the ground with all the others! That being said, Climbing Poetree brought their massive ten-year-in-the-making handstitched prayer flags that covered practically the entire road into camp, which we all spent a chilly night setting up before the concert.

Upon arrival we located the Youth Council’s yurt and were invited in to meet the youth organizers and officially introduce ourselves. Sitting in a circle around the amazingly insulated warmth of that Mongolian yurt, we all shared a little about ourselves … our work … and why we were at Standing Rock. Most of the Youth Council members we met were between 18-21 and had been on site for many months, often quitting their jobs to respond to the call to action there. They were dedicated, well organized, inspiring, and wise beyond their years as the youth of today often are when given responsibility.

From there we leapt into gear to actually make the concert happen. How to project the voice in 25 degree weather with one microphone and one mic stand? Finding skirts for us all to wear around the center fire. Tobacco to offer before the songs started. Which songs would best fit the mood of the camp. Who could help hold the extra mic to one of our mouths in lieu of another mic stand? Hand warmers to stick in our pockets in between songs. Etc. Thomas, one of the leaders of the Youth Council, was emcee and did a beautiful job introducing us to the elders at camp as well as rallying energy and making important announcements in between acts. The concert was round robin style and went on for a few hours and felt like a beautiful prayer far beyond any of us individuals. A duffel bag of chocolate was passed around. Simple pleasures in an intense setting. We mustered up a little dance party at the end to get everyone’s blood going in the cold. A cipher emerged. Faces were from all corners of this country as well as all corners of this world. Music proved yet again to be a divine force of unity and strength, as it has been since the beginning of time.

Standing Rock was so different from what the media was showing us. It was a very well-organized, culturally rich, indigenous-led, peaceful and sobriety-centered movement ripe with song, circle, art, and prayer. In going there, we realized that resistance was indeed the central focus of everyone’s actions but that the work was spreading out in so many other directions as well. Ancestral healing. Youth empowerment. Environmental stewardship. Generational respect. Voices for the silenced. Alternative media. Nonviolent training. Prayer as political power. And so much more. As we move into the paradigm that is 2017, Standing Rock will remain a guiding light of hope and strength, no matter what happens with that damn pipeline. May we all continue to step up and work hard in the years to come….. xxx 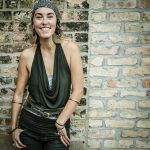 Rising Appalachia brings to the stage a collection of sounds, stories, and songs steeped in tradition and a devotion to world culture. Intertwining a deep reverence for folk music and a passion for justice, they have made it their life’s work to sing songs that speak to something ancient yet surging with relevance. Whether playing at Red Rocks or in rail cars, at Italian street fairs or to Bulgarian herbalists, this fiercely independent band has blazed a unique and colorful path across the globe. 11 years into their movement, Rising Appalachia believes that the roots of all these old songs are vital to our ever evolving soundscape.

Led by the collective voice of sisters Leah and Chloe, and joined by their beloved band – percussionist Biko Casini and bassist/guitarist David Brown – Rising Appalachia is a melting pot of folk music simplicity, textured songwriting, and those bloodline harmonies that only siblings can pull off. Listen for a tapestry of song, clawhammer banjo tunes, fiddle, double bass, acoustic guitar, djembe, barra, bodhran, spoken word, and a wealth of musical layering that will leave you called to action and lulled into rhythmic dance simultaneously. It is both genre bending and familiar at the same time. Proudly born and raised in the concrete jungle of Atlanta, Georgia, sharpening their instincts in the mountains of Appalachia, and fine tuning their soul on the streets of New Orleans they have crafted a 6-album career from the dusts of their passion.