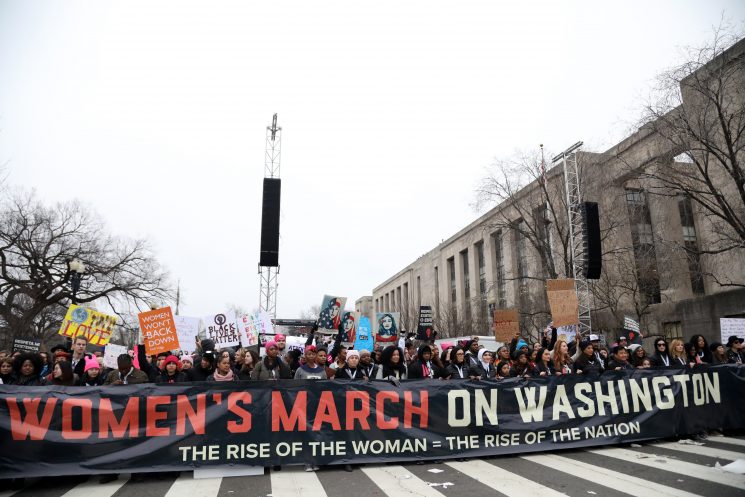 The day after the Inauguration.

I was hustling through the streets of DC trying to make the beginning of the Women’s March Rally. Pink pussy hats and lighthearted optimism percolated on every corner. I cringed, hoping this wouldn’t be the sum of my day. I’d made a 4-hour, middle-of-the-night trek to document the flagship pushback event, one of more than 600 anti-Trump/women’s rights marches worldwide. I needed a pick-me-up. Something. Anything. Except the White women finally finding their way to a fight I’ve been engaged in my entire breathing life.

White feminism. I find it alienating. It has never included me. Or my mother. Or most of the people that I love most, even though some of my closest and longest friendships are with White women who get “it.”

Outside of these 30-year old friendships, my relationship with cis White women is precarious, and borderline non-existent. When I moved back to The South, White women often hired me in order to legitimize work they were doing in Black communities. The power dynamics always got weird whenever I addressed their biases – no matter how diplomatic and gentle I was. I concluded that I don’t have the bandwidth to endure the passive aggressiveness, narcissism, or discomforting assumption of familiarity that White women often bring to interactions with Black female-bodied people. While I have great compassion for how disfiguring patriarchy and colonialism have been for each of us, I won’t place myself on the line for someone else’s unexamined self-hatred. 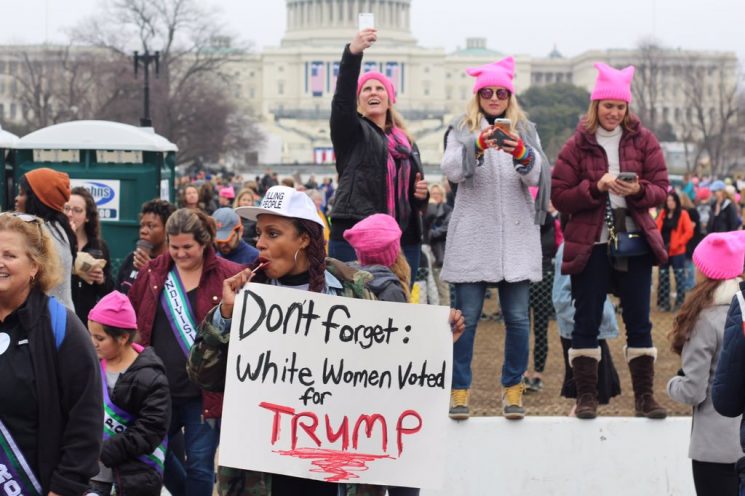 The day after the inauguration, I was one of many thousands of people of color who found themselves in a very precarious position – wanting to protest, but not wanting to spend our energy “gathering” White women while we protested.

Even the initial organizing for the Women’s March made me itch. The day after the election, Teresa Shook, a fed-up, well-intentioned White woman, created a Facebook event for the march. She went to bed with 40 RSVPs, and woke up with 10,000. She’d named it the Million Woman March – unaware that Black women organized a historic march by the same namesake in Philadelphia featuring the likes of Winnie Mandela and Jada Pinkett Smith, 20 years ago this year – and they actually attracted a million people.

Public scrutiny and critique led to the recruitment of veteran women of color organizers – among them, Linda Sarsour, a Palestinian-American-Muslim racial justice and civil rights activist; Carmen Perez, Executive Director of Harry Belafonte’s organization The Gathering for Justice; and Tamika Mallory, a national organizer for the 50th Anniversary of the March on Washington, which drew 300,000, as well as Justice or Else!, which drew 700,000. Their frontline leadership brought a fierceness and urgency to the march that would have otherwise been absent. Their input helped shape the diversity of the speakers/performers at the rally. For instance Maxwell and Rep. Maxine Waters (CA-D), affectionately known by Black Twitter as “Aunt Maxine,” likely would not have been invited to the stage without their influence. But it didn’t change the grinding conflict of being submerged in a pink pussy-hat sea of impassioned, half-woke, White woman oblivion.

Cut to Inauguration day. Black Lives Matter DC set things off at dawn by chaining themselves to one another and blocking one of the entrances to the National Mall. Later, more than 200 protesters, including journalists and legal observers, were arrested and would later be charged with “felony rioting,” a conviction that carries up to 10 years in prison and $25,000 fine. The Black Bloc scrambled through the streets of DC, wreaking anarchist havoc. Most notably, one of them punched Alt-Right (read: racist Neo-Nazi) Founder Richard Spencer down the street, during a news interview.

The next day, there were more than 600 women’s march protests worldwide – 408 in the U.S. The largest were in DC (500,000+), Los Angeles (750,000+), Chicago (300,000+). The smallest and the boldest were held by cancer patients on intravenous drips. They were too frail to leave the hospital, so they marched and rolled their wheel chairs down the halls. The coldest might have been in Anchorage – or Antarctica. Yes. People protested in Antarctica against Donald Trump.

Total estimates for participation range from 2.9 million to more than 5 million. The sheer magnitude of the outpouring captured the world’s imagination – and the critical eye of the Trump administration, which felt upstaged when more people showed up to protest his induction on January 21st than to celebrate on January 20th.

Admittedly, I experienced a mix of feelings that day. Of course, I was awestruck when I looked out at the endless sea of people, and was deeply moved by some of the speakers. I was very proud of the huge, unprecedented logistical feat that the Women’s March committee and co-chairs were able to pull off. The highlight of my day came when I joined the Indigenous Women Rise contingent. I put my camera down for a while, and sang warrior songs as we moved down Independence Ave., shoulder to shoulder with people that I knew from Standing Rock. That felt healing.

The expanding dialogue about rape culture, and the indictments of patriarchy are inspiring, but they don’t change my ambivalence about organizing with White women, or my discomfort with the assumption that when White women organize for their freedom, they are organizing for mine too. They are not, and cannot, until they unpack the ways in which they have been taught to ignore the oppression of Black and Brown women – and continue to benefit from our oppression. Within hours of the March, some attendees Tweeted about how there were no arrests made that day at the major marches. Clearly, they lacked analysis or sensitivity for why peaceful protests where attendees are majority Black or Brown would be targeted for arrest.

Fifty-four percent of White women voted for Trump. “Protecting” our borders and emboldening White supremacy were more important to them than autonomy over their own bodies and families.

There’s work I can do to shift the culture that fuels my ambivalence. For that work to be effective, many, many hundreds of thousands of White women beyond my immediate friendship base must step up to learn real American history, not the fairytales and myths that were fed to us as children. And, they/you must participate in a type of deep-tissue, radical self-inquiry that helps them confront their own implicit bias with the hope of transforming the role they continue to play in the oppression of other women and communities of color. Bear in mind, this is work that other freedom fighters and I do on ourselves everyday. I expect no less from the fresh legs who are just coming to the fight.

As for capitalizing on the momentum of the Women’s March, there are many ideas:

-Becoming ungovernable for the duration of Trump’s presidency.

-Organizing to reclaim the house in the 2018 election.

-Calling Congress EVERYDAY to push back against Trump’s aggressive schedule of appointees and executive orders that are clearly leading us towards domestic and international wars.

-Publicly questioning the voting records of elected officials by showing up to hearings and meetings where there are news cameras. This was recommended by a retired Congressman Steve Israel (D-NY), in lieu of making phone calls, especially since Trump’s White House stopped taking calls the first week he was in office. He says this strategy was successfully employed by the Tea Party, which got us a Republican House, Senate, and presidency.

-Calling upon Republicans to disavow Trump’s lies and manipulations.

These are just a few.

More than anything, it’s important that we speak out – every day, every week, and that we never grow comfortable with a president who brazenly disrespects women, Muslims, Mexicans, Blacks, White people with good politics, and First Nations people.