Tassels and Transgressions on the Third Rail: Shaking It Up for Social Justice through Burlesque

Editor’s Note: We’re thrilled to publish this article by one of our Barbeque, Burlesque, and Bourbon headliners and longtime members, S.T. Shimi aka Black Orchid. Come on out to see Black Orchid, Sadie Hawkins, and a host of other fierce and fabulous artists at 3BQ, ROOTS Inaugural Un-Gala, on October 24, 2015. Get your tickets today!

I’ve been a ROOTS member for at least 15 years now. In that time, I grew out my hair, got a few more tattoos, became a married lady…and acquired a few different performance personas.

S.T. Shimi is the one I’ve owned since kindergarten. What my parents call my “pen name,” that I use for academia, literary efforts, “serious” theater/performance/storytelling work. “Shimarella” is my PG-friendly “glam-tertainer” (my term for any style of performance that utilises the purely sparkly, fun side of show business): she wears sparkly costumes, plays with fire, spins hula hoops, and occasionally climbs aerial silks.

Black Orchid is the persona I’ve been most associated with recently. She’s my most adult and sultry character who pole dances (since 2011) and performs burlesque (since 2009). She doesn’t speak much because she doesn’t have to – the language of the body is all she needs.

But how does a progressive artist and activist reconcile her (body) politic with an art form that’s all about disappearing clothes?

Welcome to the Third Rail

You see, for a long time now, I feel that I’ve been moving steadily towards what I think of as “the third rail” of physical and artistic expression. The kind that is about being unashamed to celebrate, exhibit, and express with a gradually denuded and intentionally sexual body. Sometimes it’s deep and transgressive theater – because burlesque is really just theater that utilizes reverse engineering to move towards a punchline of disappeared clothes – and sometimes it’s a purely joyous and fun expression of self.

What makes it “the third rail” for me is that on both sides lies strong social condemnation. On one side, moral-minded conservatives don’t think that it’s proper or ladylike that women move their hips, shake their breasts, open their legs, and touch themselves on stage. On the other side, some progressive/radical thinkers believe that openly sexual performance for an audience must be by its very nature exploitative, and that we who dance are deluded and unaware of our own victimhood. For example, I was initially told by a (now supportive) colleague that “the pole is a symbol of oppression.” 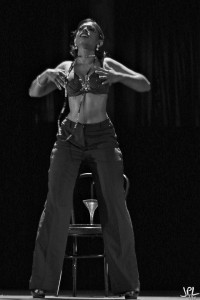 As an Asian woman, I’m also doubly aware that this “third rail” has added weight because of the repressive conservatism that many of us have questioned and rebelled against since childhood, as well as the very mixed feelings that many community activists have about adding to the sexualized and exploited stereotypes that plague Asian women (something that many communities of color can identify with). As a small, “exotic” woman, I am aware of how my body can be seen as colonized and consumable. Part of my aesthetic is intentionally using that initial, potentially dismissive impression to my advantage. There is always something in my act that upends expectations: whether it’s defying gravity by holding my body up sideways with only two points of contact on a pole while wearing 8 inch heels and a bikini, or defying heteronormativity through a performance that starts out as “conventionally” mainstream and quickly becomes queer, through dancing and stripping to music created by and about women who love women. And I am not alone among burlesque performers who make work that surprises in this way.

When I first started taking belly dance classes in San Antonio in 1995, I thought a lot about cultural appropriation, and about exploited stereotypes, and what I could consciously reconcile with my desire to move. I thought so hard about it that I literally immobilized myself. That in itself made me unhappy and angry. I needed to move forward from that fear with as much integrity and thoughtfulness as I had within me, and hopefully I did. My continued evolution as a performing artist led me to burlesque in 2009 and pole dance in 2011 – movement and performance genres that deconstruct and challenge perceptions of how women specifically own, perform, and display our bodies in interesting and often subversive ways. While far from perfect or homogenous, the burlesque and pole communities often engage in creating a liberating world that seeks to unbind its practitioners from hidebound expectations of performing bodies.

After its neo-burlesque (and more feminist and performance art-based) revival in the 90s, burlesque has certainly become more mainstream. Current burlesque performance can center around preservation, satire, celebration, performance art, or pure glamour, or more often, a mashup of several styles. Many of us move within these categories easily and also intentionally complicate them. With mainstream popularity comes the challenges of balancing our desires as artists for bigger stages while maintaining the integrity of what, in its modern incarnation, became a way to celebrate bodies of all sizes, a DIY production aesthetic that continues to be primarily driven by women, and an edgy performance art inspiration. Admittedly, burlesque, like any other community, continues to wrestle with issues of cultural appropriation, financial exploitation, and minority erasure, especially as the tent becomes bigger. The conversations within the community, for those that choose to have them, are passionate and ongoing.

Can there be burlesque with an explicit focus on social justice? Absolutely. Just a few examples: Indigo Blue is an internationally known Queen of Burlesque and a queer activist who lends her name and tassels to Pride events. Sukki Singapora lobbied successfully to make burlesque legal in Singapore, has been an ambassador for Indian girls’ right to education, and was invited to Buckingham Palace in recognition of those efforts. New York-based Brown Girls Burlesque, is one of several burlesque troupes that focus on highlighting women of color who make work that is both celebratory and challenging. Several of their members are also academics — something that is not uncommon among burlesque performers. Within the ROOTS region, Fat Bottom Cabaret, an award-winning troupe featuring women of size and color in Austin, TX created a powerful Black Lives Matter dance that has been seen in national burlesque festivals. Fight The Power! was a recent burlesque show in Baltimore that featured acts about current social justice issues, and proceeds went in part to Project Innocence. As one of the producers of Legislate This! Texas, I have raised funds for Planned Parenthood locally with the help and support of other like-minded burlesque performers. 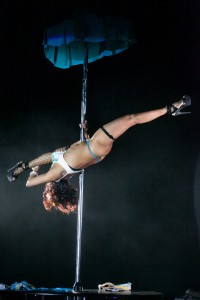 Those of us that choose to utilize burlesque to showcase our intersecting identities all understand that there is power in putting our bodies on the line and in people’s faces. We collectively create space where our bodies are ours alone to share as we please. Through this artform, we transgress cultural norms, telling stories that challenge misogyny, racism, reproductive injustice, and/or homophobia in provocative, empowered ways. Confusing, hypnotising, and thrilling audiences with tassel twirls and glitter is a tactic and a bonus. Sometimes it takes an audience a hot minute to realize that what they’re seeing isn’t “just another strip act.” Take your time. We’ll still be here.

I believe that my sexual expression onstage is transgression. I believe my body onstage is celebration. I believe that living fully in the intersections of all my identities as a performing and creating artist is truthful and fierce. I believe, just like Emma Goldman, that a revolution is not worth participating in if I can’t dance in it. And if I can be mostly naked and covered in glitter, then all the better!

Alternate ROOTS has always supported my growth as an artist. From performing what little I knew as a baby bellydancer at my early Cafe Bizzozos (the storied precursor to what is now ROOTS Week Late Night), to offering salient feedback on my politically toned solo theater works, to packing the insides and outsides of Efird Hall for my multi-media and aerial experiments with Billy Munoz, to inviting me to be a major part of this last ROOTS Week showcase, and now, 3BQ as my Black Orchid self. This organization has been hand in hand with me all the way. I’m so thrilled to be a part of this “un-gala” with the fiercely feminist and fiery Sadie Hawkins!

I hope you are ready to dance this revolution. Because honey, we are going to tear this place up and then rebuild it together.

S.T.Shimi AKA Shimarella AKA Black Orchid is a foxy brown performance artist who has been living and making work in San Antonio for two decades. Born and raised in Singapore, her performance work examines the intersections and contradictions of multiple identities in irreverent, provocative and visually intriguing ways.

She has created and collaborated on several original performance works over the years,that have been seen at several major local arts festivals, as well as on stages around the country.

Shimi teaches and trains in pole at Soft Sensuous Moves, San Antonio, and has competed and placed in pole competitions in her Division (Masters), including Miss Sexy at Miss Texas Pole Star 2014.

For twenty years, Shimi was a company and staff member of Jump-Start Performance Co., fulfilling the roles of Artistic Director, Resident Lead Arts Educator, Education Director and representative to Alternate ROOTS along the way. Her relationship with ROOTS is a long and loving one, including stints on the Executive Board and numerous (in)famous performances at Annual Meetings.

Shimi graduated from Dartmouth College with a degree in theater and Women’s Studies.

3 comments on “Tassels and Transgressions on the Third Rail: Shaking It Up for Social Justice through Burlesque”