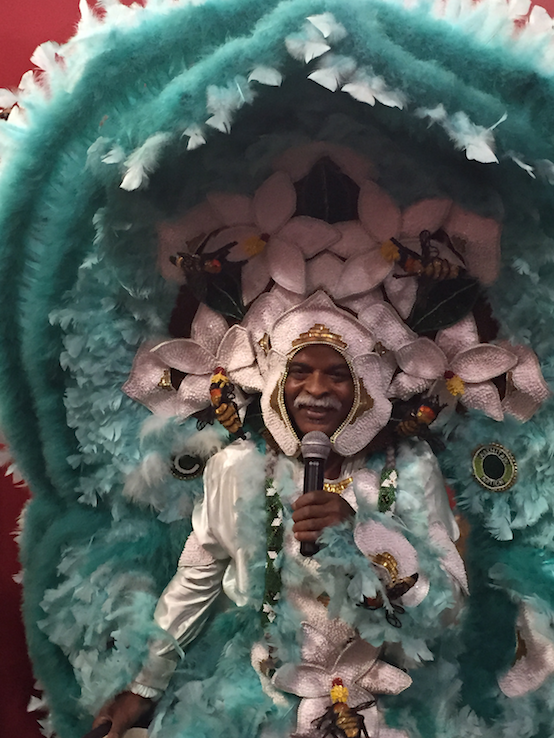 New Orleans is ten years post-Katrina. The landscape of the city has been ravaged and reimagined primarily by those who have little need or concern for the city’s historically marginalized communities. And as those who witnessed Katrina 10, the city is proclaiming a narrative of resilience that promises fresh faces, new opportunities and a near finished state of rebuilding post the storm.

At New Orleans ROOTS Weekend, the first of six regional gatherings leading into Alternate ROOTS’ 40th year, we heard differently. New Orleans is suffering from record rates of incarceration, an inability to remember its past and disaster capitalism that threatens to commodify and erase the roots of many distinct New Orleans cultural traditions. During the weekend we heard songs of the Black Mardis Gras Indians, viewed photos of the lives of black men incarcerated in Louisiana’s Angola prison and were moved by the stories of formerly incarcerated women from The Graduates. Moving from resilience to resistance is not easy, but, as alluded to this weekend, the fortitude, strength and belief in art and culture may be the path that this resistance will take.

Resilience is defined as the process of adapting well in the face of adversity, trauma, tragedy, threats or significant sources of stress. It assumes that threats will always be there, that tragedy is always around the next corner and that the best you can do is struggle to survive. This framework comes from a society built on the belief in scarcity. There are not enough houses, jobs, good schools, grocery stores with affordable healthy food, etc. There will never be enough and in order to live, our systems are created to help those who are already helping themselves: those who have the insurance, evacuate the city, assimilate into expected cultural and societal norms, those who acquiesce, those who don’t resist. But New Orleans has a history of resistance. From the 1811 Slave Revolt to the Free Southern Theater’s founding, the BLKARTS Movement, Black Mardis Gras Indian tradition and the brass band and social aide and pleasure clubs takeover of the streets, people in New Orleans have been resisting scarcity mentality for hundreds of years. And so, with this history, we entered into space to witness, discuss and dream how to continue this legacy.

Friday night, we were blessed with a first look at Junebug Productions’ new documentary about the Free Southern Theater and its work as pioneers in integrating art in movement building work in the South. The film showcased co-founders, John O’Neal, Doris Derby and Gilbert Moses as they discussed their process of creation, the necessity of bringing art into rural areas and how they expanded their work to go beyond the theatre, creating reading programs, voting registration drives and other forms of enfranchisement opportunities for black folks living in the segregated South. Both John and Doris served as Field Secretaries for SNCC (the Student Nonviolent Coordinating Committee) and they utilized the FST as a way to organize their fellow artists to use their skills in the effort of mobilizing the black community.

The art served as resistance. It became a catalyst to action, to struggle, and to defiance of the white status quo. Many audience members reflected on their desires to learn more from this legacy, to investigate the specific methodologies, programs and processes that made the FST successful and radical in their work. The conversations following the piece delved into the importance of learning from our ancestors, investigating our histories and lifting up the narratives of resistance that are part of our cultural foundations in the South. This importance was reflected again on Sunday when we listened to stories of ROOTS’ birth from founding members Linda Parris-Bailey of Carpetbag Theatre and long-time member Kathie deNobriga. Linda recalled studying the book, The Free Southern Theater by The Free Southern Theater, and it framing for her the path she wanted her art practice to take. When she found herself with John O’Neal, Jo Carson and others on the rocking chairs of Highlander in 1976, she knew she’d taken the right trajectory.

In each workshop session and performance we were invited to see how artistic practice documents, enhances and questions our political, racial and economic systems. The ROOTS weekend asked us to grapple with some of the most pressing issues we’re currently facing as a nation: mass incarceration and the continued political disenfranchisement of black, brown, queer, and women’s bodies.

On Saturday morning, we witnessed women from The Graduates perform stories of their incarceration and healing. These women, all former members of the Louisiana Correctional Institute for Women (LCIW) Drama Club, spoke passionately about what the Drama Club provided and its role in increasing their ability to survive the harsh conditions of servitude. In prison, one woman stated, they weren’t allowed to maintain eye contact, decide when they would eat, sleep or socialize and this constant dehumanization made her anti-social. The Drama Club for her was a lifeline to connection, to building relationships and remembering how to communicate and engage person to person. The Graduates is just one of many reflections of the work that ROOTS has cultivated since its inception.

The number of women in prison has increased by 646% between 1980 and 2010, an increase nearly 1.5 times the rate of men. Following The Graduates performance, the audience was provoked and meditated on the ways the prison industrial complex continues to dehumanize, separate and disproportionately harm women and their families. The discussion centered on ways for us to be accountable: how can we push for more just systems, what are the ways we can assist folks as they leave prison and re-enter society, how do we decrease pathways to incarceration through community supported structures. Again, through the art, we learned what it means to resist abuse, unjust treatment and to agitate for our rights, our lives and our abundance.

The performance ended with a tribute to long-time member and Graduates namer, Sherral Kahey, who passed later that day. The Graduates presence in the space was due to her legacy. She lost her relationship with her family, her children, but through the work of the Drama Club and The Graduates was able to regain her connection to friends, to create a new family and to inspire a cohort of women to believe and act in the power of art, justice and self-love. At the end of the session we sang a song she had crafted: “Life is…what you make it, life is, happiness, life is where you’re going, life is, where you been.” Our lives, our struggles and our world will always be crafted by our commitment to and engagement with our legacies and our future.

As we closed the space, we sang together, led by Big Queen Ausettua Amor Amenkum. We sang for the release of Ms. Sherral’s spirit in echo of the Black Indian performance we saw Friday night, “Won’t Bow Down.” 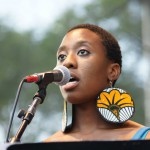 Rebecca Mwase is a theater artist, educator, creative consultant, producer and cultural organizer working at the intersection of art and social justice. Her artistic work explores race, gender, religion, sexuality and class and seeks to illuminate, question and change the power structures that control our society. Rebecca is dedicated to creating original performance and her newest piece, Looking at A Broad will premier in New Orleans November 6th at The Theater at St. Claude. www.rebeccamwase.com

0 comments on “Resistance as Legacy”

1 Pings/Trackbacks for "Resistance as Legacy"