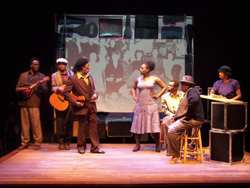 About the Group:
The Carpetbag Theatre, Inc. (CBT) is a professional, multigenerational ensemble company dedicated to the production of new works. Its mission is to give artistic voice to the issues and dreams of people who have been silenced by racism, classism, sexism, ageism, homophobia and other forms of oppression.  CBT serves communities by returning their stories to them with honesty, dignity, and concern for the aesthetic of that particular community. CBT has numerous touring performance options and a range of cultural services including workshops in: ensemble process, storytelling and story circles, spoken word, song development, and an extended digital storytelling workshop.