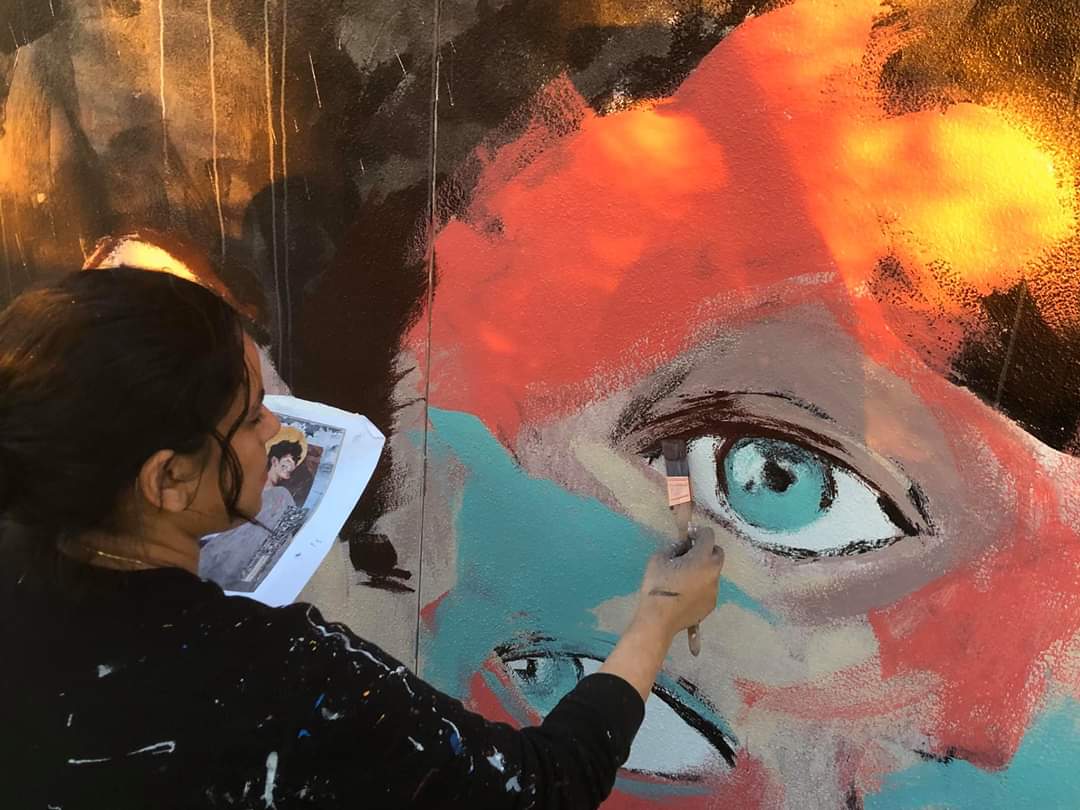 Detail of the mural “Painting Ourselves Visible” mural by Aya Tarek.
Photo by Ameena Khan.

“Painting Ourselves Visible” seeks to celebrate and increase the visibility of Arab, Middle Eastern/North African (MENA), and Muslim communities in the Tampa area. During a multi-day celebration in November 2019, a three-story mural by Egyptian artist Aya Tarek was celebrated with music, film screenings, performances, food, and a panel discussion on Creative Placemaking. The project was created by Art2Action in partnership with Gallery221 at the Dale Mabry Campus of Hillsborough Community College (HCC), and made possible by a $30,000 Treasure Tampa grant from the Gobioff Foundation, as well as support from Alternate ROOTS’ Partners in Action Program, and a partnership with the City of Tampa Arts & Cultural Affairs department.

On November 22, 2019, Andrea Assaf moderated a Creative Placemaking Panel as part of an Alternate ROOTS Learning Exchange. Here are some highlights from the discussion.

“Creative Placemaking is complex and occurs at the intersection of economic development, community‑building, and justice. We will examine Creative Placemaking from the points of view of city government, funders, and artists”.
These are the panelists:

Robin Nigh, Manager of Arts & Cultural Affairs for the City of Tampa

Photo Caption: Artist Team of the “Painting Ourselves Visible” project at the November 2019 mural.

What do we Mean by Creative Placemaking? Perspectives from City Government, Funders, & Artists

Ashley (funder): This is the definition that Alternate ROOTS uses: “Creative Placemaking encompasses creative practices and cross‑sector collaborations that contribute to the health, sustainability, and equity of community. ROOTS seeks to uplift forms of community development rooted in justice and equity, spirit and culture.” We need to support folks who, for the past 40 years, have been doing Creative Placemaking. They may not call it that. They are doing work in community and using art. My role is supporting those artists to get the resources and the connections that they need. “Creative Placemaking” is a term that was coined by the National Endowment for the Arts in 2010, but there are plenty of people who have been doing that work for many years.

Robin (city): It’s very different when a planner, or somebody in transportation, talks about Creative Placemaking, versus social interaction and engagement. If it’s economically driven, then you’re going to have a different approach and structure, versus if your end result is community-building and community‑based. It’s like building from the bottom up, versus the other way. When it’s more economically driven, you’re going to build from the top down, in terms of process.

Neil (funder): Years ago at a conference, Jamie Bennett from ArtPlace America introduced the concept of Creative Placemaking. Some of the examples he gave didn’t take a lot of money, were community‑based, and were driven from the ground up, versus the top‑down. We invited Jamie to speak to a larger group, and then we started the Treasure Tampa program. We focus our idea of Creative Placemaking around Collaboration, Community, and Cross‑sector. Jamie said that one resource that every single neighborhood has is artists. Art communicates humanity, and it can also help facilitate communication between the government and the people that it represents. 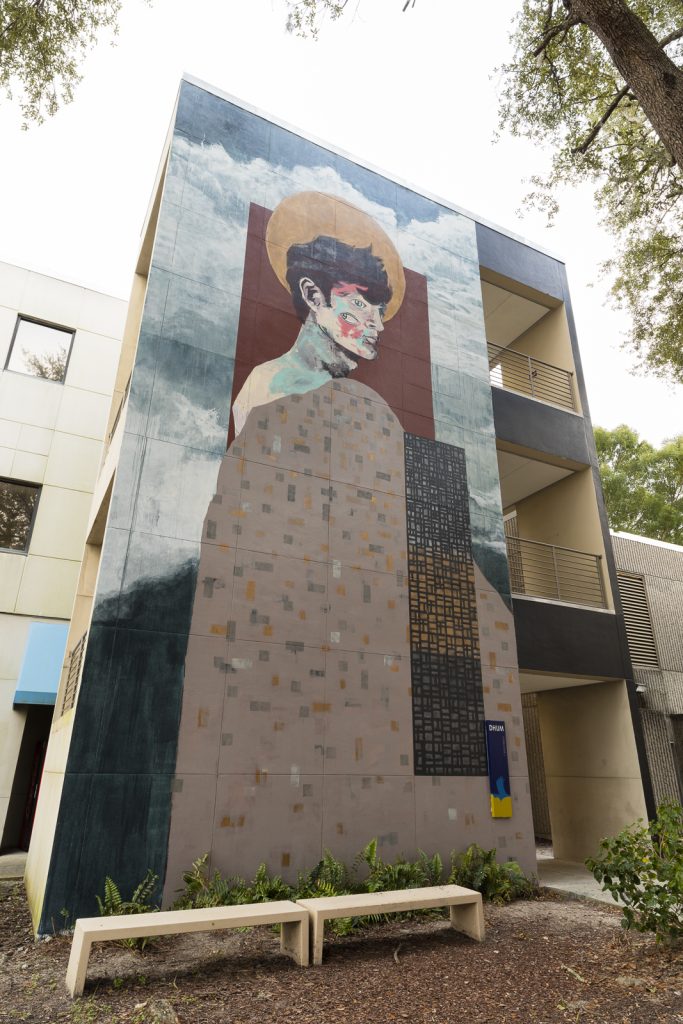 “Painting Ourselves Visible” mural by Aya Tarek. Photo taken at ribbon-cutting event on November 22, 2019 by Pat Blocher. Aya Tarek is an internationally acclaimed painter and street artist who lives and works in Cairo, Egypt. Tarek explains, “In my work, I focus on investigating the notion of urban communication and interactivity. Through site-specific public interventions, I represent personal elements into public spaces, exploring the relation between the individual private space and the public one.” – University of South Florida Institute for Research in Art

How do we do the work of Creative Placemaking? Advice from City Government, Funders, & Artists

Robin (city):  One thing that is really critical for community building is to have the right artist. It is incredible when an artist recognizes that the community brings value, and that they can inform the work. But when an artist comes with a very fixed view about what they’re going to do in a particular space—candidly, you can always tell because, then when they leave, the space is kind of empty. Community building, which to me is the core of making place—making a “there” there—takes time.

Andrea (artist): This process‑based work is about how you build lasting relationships across communities over time. It’s very hard to fit it into the timeline of a single grant, or all those government structures that make this kind of work challenging. The relationships that are built around the work, whether it’s a public art piece or a performance, are the things that transform the place over time. “Painting Ourselves Visible” is about our partnerships with the Arab, Muslim and Middle Eastern communities in the Tampa Bay area, which are extraordinarily large and quite invisible, in a politically fragile historical moment.

Ashley (funder): Equitable partnerships tend to uplift grassroots creative and community‑powered solutions. Your community partners are always going to be key to building authentic relationships. You need to be talking to the people who are most impacted by the issue that you’re trying to address. A challenge of Creative Placemaking is that real estate interests and commercial economic drivers are often centered and prioritized, with art being like beautification. In the grantmaking that we do for Alternate ROOTS, authentic community partnerships are a key component of how we evaluate. This work moves at the speed of trust and relationships.

Neil (funder): Connections: that’s one of the biggest challenges. For Treasure Tampa, we award $30,000 because that’s a good amount that people can work with. The hope is, for us, that grantees will launch something that can then be leveraged to do more. Measuring success is a challenge to us. When it comes to art and Creative Placemaking, for us right now, it’s “Did it happen? Was there an impact?” 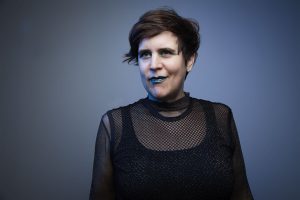 Nicole Garneau is an interdisciplinary artist making site-specific performance and project art. Her book Performing Revolutionary: Art, Action, Activism was published in 2018 by Intellect Books and released at the Museum of Contemporary Art in Chicago. Her work has been supported by the Living Copenhagen Artist Residency, Live Art Development Agency of the UK, Alternate ROOTS, the Illinois Arts Council, the Chicago Department of Cultural Affairs, and Kentucky Foundation for Women. She is an active member of Alternate ROOTS. Originally from Chicago, she now resides in Rockcastle County, Kentucky, where she nurtures a multi-year collaboration with Clear Creek Creative. In 2019-2020, Nicole spent 4 months in Russia as an artist in residence with CEC ArtsLink in four separate locations, and also presented her work in Berlin, Copenhagen, and London. She teaches at Eastern Kentucky University, makes theater in non-traditional settings, facilitates meetings, throws parties, and does healing work. Nicolegarneau.com