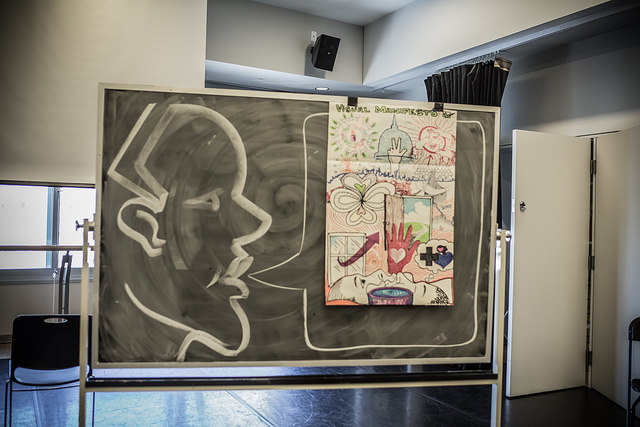 We are present in the space with each other, relaxing shoulders and tingling feet. We have time to listen to each others’ truths. We are climbing, crawling, crying, and laughing up the mountain with all of our messy bodies and histories, babies and ancestors strapped to our backs.

At the Hemispheric Institute’s Encuentro in Montreal June 21-28, a team from Alternate ROOTS was invited to teach a workshop in which we shared ROOTS’ Principles of Community Engagement and offered folks hands-on ways to manifest these principles in their own community engagement work. The Encuentro featured dozens of performances from artists based in South and Central America, Mexico, Cuba, the Caribbean, the US, and Canada.  It was also filled with other workshops, keynotes, discussions, and working groups.

Since “Hemi” is dedicated to the study and presentation of cultural work that is explicitly activist in nature, one can imagine that discussions within the conference sometimes got heated. Several ROOTS members and I were involved in 3 major political struggles within the Encuentro: 1) fierce reaction to the performance “Juana La Larga” by Jesusa Rodríguez and Liliana Felipe by trans folks and others; 2) creative and politically incisive actions and discussions aimed at Hemi itself in response to the physical inaccessibility of spaces used for Encuentro Programming; and 3) a performance/ protest by Andrea Assaf in response to Orientalist stereotypes within Nao Bustamente’s performance, “Silver and Gold.” Andrea Assaf takes up a fuller exploration of the complexities of these struggles in a blog post that will run later this week. In the meantime, here are some questions that emerge as useful for the work of Alternate ROOTS and the artists that make up our membership: 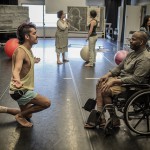 Whose bodies are we using to illustrate our stories? If those bodies are not our own, how do we deeply examine the ways in which reproducing images and stories of violated bodies can feel like an assault against the bodies of some audience members?

In the words of the Performing Disability/Enabling Performance working group, “How do disabled bodies challenge conventions of representation in art and in everyday life?”

How do we create spaces that are welcoming to all kinds of bodies for the sharing of cultural work and dialogue? What would it mean for Alternate ROOTS and its members to practice the principles of “radical access,” and continually redefine those principles?

When our work includes racialized bodies, how are we helping an audience understand the complicated contexts for our use of racial images?

How is our present historical moment an unavoidable fact when we are re-presenting images and stories from the past?

How do we, as artists, listen deeply to the criticism of people who respect us but feel genuinely injured by our work? What is our responsibility to the people who experience our creative output, as viewers or audience members?

Nicole Garneau is an interdisciplinary artist making site-specific performance and project art that is directly political, critically conscious, and community building. Nicole has been a member of Alternate ROOTS since 2009. She is currently writing a book about the UPRISING project: 5 years of monthly outdoor performances exploring practices of revolution from 2008-2012. Nicole teaches in Women’s and Gender Studies at DePaul University. She holds a B.A. in Theater from the University of Illinois at Chicago and an M.A. in Interdisciplinary Art from Columbia College Chicago. She also teaches a variety of creative workshops, makes ceremonies, and practices healing. Her work is documented at nicolegarneau.com. Follow her on Twitter @nicolegarneau.