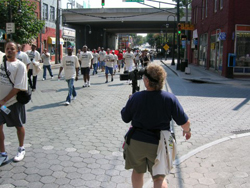 About the Artist:
Bailey Barash is an independent documentary maker with many years of experience in television news.   After 19 years producing medical and science news at CNN, she formed an independent production company to produce documentaries that reveal the hidden issues in society and show factual information and possible solutions through the stories of real people dealing with those issues.  She screens her work in interactive workshops at universities, community health centers, churches, youth organizations, film festivals and conferences, world wide, emphasizing the ethical and creative considerations of verite film making while introducing the audience to the basics of documentary production.

Current Projects:
Bailey researches, shoots, writes and produces documentaries that focus on distinct social conditions or cultural communities, human stories of issues like terminal illness, HIV/AIDS, aging and racial, ethnic or gender discrimination.  She works directly with people whose lives are affected to tell their stories, connecting the viewer to their lives, daily decisions they make and actions they take to survive. Bailey enlists artists within the community to collaborate on production and screening. She screens and discusses her films at local community venues. Bailey interacts with other filmmakers about how to make relevant, issue-focused, low-budget, effective films.

NO RULES: The Life and Times of Joe Strain from Bailey Barash on Vimeo.