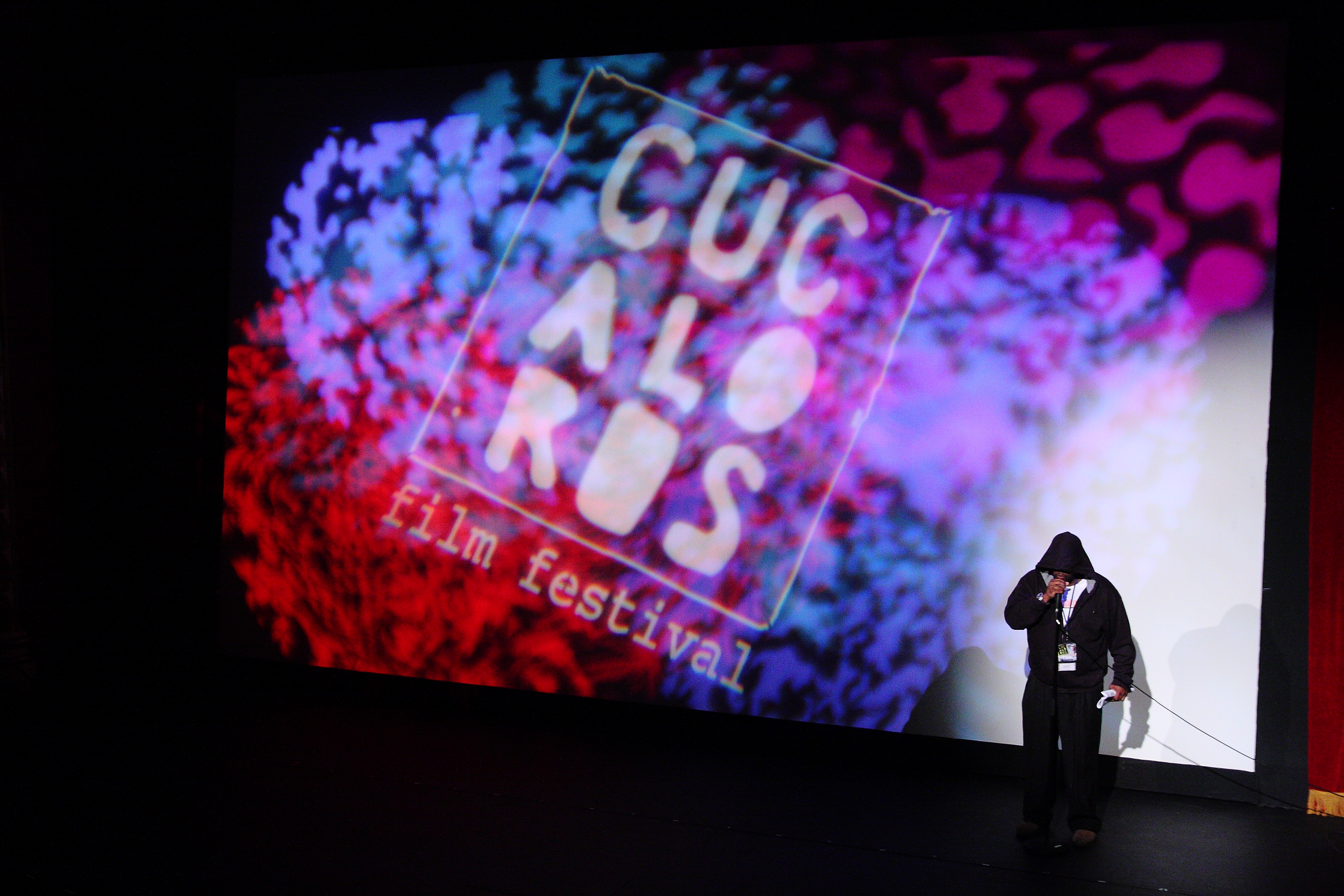 [reposted from Arts in a Changing America, January 2013] 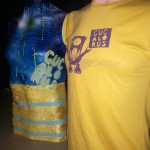 I recently had the great pleasure to travel to Wilmington, NC to experience the Cucalorus Film Festival for the first time. Started in 1994 by the filmmaking collective, Twinkle Doom, and led today by Dan Brawley and his band of merry artists, this annual event is unique in the field of film festivals.

In sitting down to talk with Dan, he shared his perspective on what he’s helped to build:

“At the festival itself, we screen about 200 films from 15 different countries.  Artists come from all over the world.  Unlike a lot of other festivals, Cucalorus doesn’t give any awards at all; there’s no competition, no red carpet.  The focus of the festival is really on the filmmakers.  We try to create a more relaxed atmosphere where artists can connect with one another.  In a lot of ways the atmosphere is similar to an artists’ retreat, where people are away from home, going somewhere new and different, to recharge their creative energy levels.  I think that’s what happens for a lot of artists at Cucalorus.  It’s not a networking festival; you’re not there to sell your film or to press flesh with agents and whatnot.  It’s really more about the creative side of the art form.”

After going to several special events, seeing films, witnessing the line-up of MCs, and observing the event spaces spread across the Wilmington downtown area, I started to see Cucalorus as Dan’s traveling circus.  Every part of the event was filled with equal parts his creative, magical energy along with his thoughtful, visionary leadership. 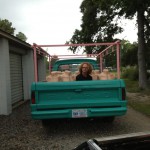 Cucalorus didn’t start out the bustling, carefully programmed event it is today.  I asked Dan to describe how it has evolved over the 13 years he’s been leading it.

“When I first got involved, we didn’t have an office, we met on somebody’s front porch and just handed out tasks by saying ‘you do this, you do that.’  It was a real grassroots, kitchen table organization.  Today, we’re an institution in many ways.  We have an 18-member board of trustees, we’re a 501-c-3 nonprofit organization, and we have as many as 15 seasonal paid staff members every year, along with hundreds of volunteers.  Our budget has grown from just a couple thousand dollars to over $250,000 a year.  It’s really transformed in a lot of ways from when I first got brought into it.”

Dan feels he’s had an opportunity to co-evolve along with the festival, being very young when he first came on board:

“When I graduated from college in the late 90s and came to Wilmington to work in the filmmaking industry, it was just one of the coolest things happening in town.  I kind of got sucked into it. It’s been a great opportunity for me as an artist professional, also as a creative person.  For the most part, I’ve learned everything on the job, learning by doing. You know, I was just right out of undergraduate school, and kind of got brought into an organization that was in its really early stages.  It’s been a great learning opportunity, a vehicle, for me to sort of craft my vision as a collaborator, as an artist, and as a community organizer.” 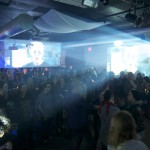 Dan came to be a member of my organization, Alternate ROOTS, in 2008.  Alternate ROOTS is a regional service organization based in the US South whose mission is “to support the creation and presentation of original art, in all its forms, which is rooted in a particular community of place, tradition or spirit.  As a coalition of cultural workers, we strive to be allies in the elimination of all forms of oppression.”  ROOTS is a network of dedicated and talented artists, administrators, and advocates.  Our work is as diverse as the people within it.  Covering a 14-state service region, we have hip-hop artists teaching kids how to write self-affirming poetry in Mississippi; sculpture artists working on food justice in Charleston, SC; and theatre artists addressing mountaintop removal in Kentucky.

Not long after joining, Dan proposed that ROOTS start sending some of our best facilitators from ROOTS’ Resources for Social Change program to facilitate Learning Exchanges in conjunction with presentations of works in progress films. 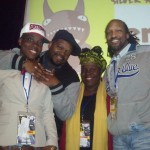 Now, four years later, Cucalorus and ROOTS have formed a substantial and lasting partnership around the festival and its Works in Progress series.  Other partners involved this process include the Southern Documentary Fund and Working Films, two great organizations dedicated to catalyzing new film works.  Their presence and contributions to the festival were substantial.  This year, our facilitators worked with films about domestic violence, farmer veterans, revolutionary journalists in Latin America, and trailblazing African American tennis players.

I asked Dan to tell me more about this partnership and how it’s developed:
“Cucalorus has always had a really strong social justice program, and it seemed like a really obvious fit for ROOTS/Resources for Social Change to come and get involved with what we were doing at the festival and maybe expand that a little bit – how we were using film as a tool out in the community.  At the same time, the RSC facilitators were really interested in the question of ‘how can we engage filmmakers?’  A lot of the work that RSC had been doing was in the theatre or visual arts, so it was sort of a new territory for both of us.  I think Cucalorus has really grown in its understanding of what documentary film and filmmakers with an interest in social justice – what their needs are, and how to connect them with community organizations such that the filmmaking process becomes a community activity.  You know, so many filmmakers work in isolation and then they bring their finished film to an audience, and it’s like a neat little package.  There’s not a lot of opportunity for the people in the community to integrate themselves with the process or with the creation of meaning in the work.  That’s what we’ve tried to do.  We’re linking RSC facilitators with filmmakers at different stages of production where the facilitators become collaborators in the filmmaking process, and we introduce specific communities and populations that will be especially impacted or have a special place in helping to mold and inform the meaning and the work.” 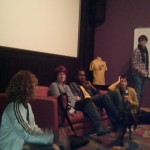 Dan meets with his production team the night before the festival opens.

It’s important to note here that Dan didn’t just join ROOTS as a member; he jumped in with both feet, fairly quickly becoming a member of our Executive Committee, then Treasurer, and today serving as Board Chair.  One of the things that struck me when I went to Cucalorus was how evident Alternate ROOTS’ organizational culture was in Dan’s professional leadership today.  We have these powerful tools for working together, such as assigning roles at the beginning of a meeting so that we share leadership.  When I observed a production meeting the night before the festival opened, the first thing other leaders started doing was assigning roles.

I asked Dan about how and why being a member of Alternate ROOTS has informed his own organizational practice:

“I was introduced to ROOTS at an important point in the evolution of Cucalorus.  I think I also started working with Melanie Daniels of Arts Action Resource about the same time, so I started to think about really what were our habits, procedures, and how are we operating.  Did the structure of our organization and the way we were operating reflect our values and the reason that we showed up every day?  Were those closely aligned?  ROOTS has been an incredible laboratory for me.  Watching the evolution of Alternate ROOTS, watching how meetings are facilitated, learning from both the long history of being really inclusive and a participatory democracy was really helpful.  In a lot of ways it’s about innovation.  It’s about how do you remain flexible and adapt in a pretty volatile environment.  ROOTS is really good at that.  Hopefully a little bit it works the other way as well.  I think that’s one of the greatest things about the way that really deep partnerships work is that, regardless of how big your organization is or how long its been around, every organization has a few characteristics that are really unique, that they’re doing really well.  Really good partnerships take root when organizations can share practices to move both forward. The connections are deepening, and we’re learning from each other.” 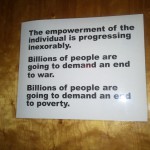 Sign found in Jengo’s Playhouse, the 60-seat microtheatre that serves as the hub of Cucalorus operations.

Dan’s right.  He’s brought some really interesting ideas back to Alternate ROOTS, and our Executive Committee is structured differently as a result of his leadership.  The partnership goes both ways.

Toward the end of our conversation, I explained to Dan that I was writing this article for a journal called “Arts in a Changing America.”  I asked him to take a minute to reflect on the work of Cucalorus and ROOTS and how the notion of ‘arts in a changing America’ plays out in both those organizations.

“I think both Cucalorus and Alternate ROOTS embrace change as an integral part of the process. Somehow, innovative organizations manage to captivate people and capture intelligence without simultaneously building obstacles all over the place. Some of that is built into the ‘who comes is’ attitude that ROOTS espouses. Cultural organizations that remain flexible and adaptable will be so valuable as models for entrepreneurship. There’s nothing riskier than devoting yourself to a non-profit arts organization – its all risk with very little upside. So it tends to be a courageous group of people with vision and a real desire for change who find themselves at the table. When I first came to ROOTS, I remember thinking – ‘Wow! If the world were more like this, we’d be doin alright’. So I’ve tried to fold as much of ROOTS into Cucalorus as possible.” 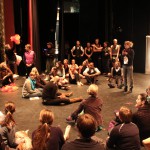 Certainly, if the world were full of more leaders like Dan Brawley, it would be a more creative and magical place.