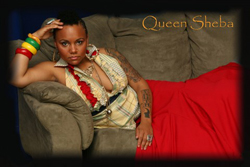 Current Projects:
Sheba is currently working on her first collection of long poems and short stories:

She has performed her poems as a solo artist and with her all girl alternative rock band, Tempo 1-60, in over eight countries, three continents including but not limited to across the United States, West Africa, and four countries in Europe, with a special detour to K Town Germany US Air Force base where she captured an intimate and unforgettable audience of US troops.

From her performances at the Savoy in LA, The House of Culture in Antigua, West Indies or Harlem’s Apollo Theater, according to Nikki Giovanni Sheba is one of the most dynamic (writers and) performers of her generation. After hibernating all winter and her new show, My Thoughts Out-Loud, is set to grow wings on a new tour in 2011. Sheba’s debut rock album, They Say, is scheduled to start recording early Spring with Grammy nominated producer Nick Chahwala. Accompanying Sheba on They Say, cameo appearances by Eva Kennedy, RES and other black-girl rockers.

*This pricing structure is to encourage promoters/organizers to work with each other in creating multiple venue shows within the same region. Does not have to be same city but each venue should be less than 2-3 hrs driving distance.
* Everything is negotiable. These fees do not include housing and transportation.