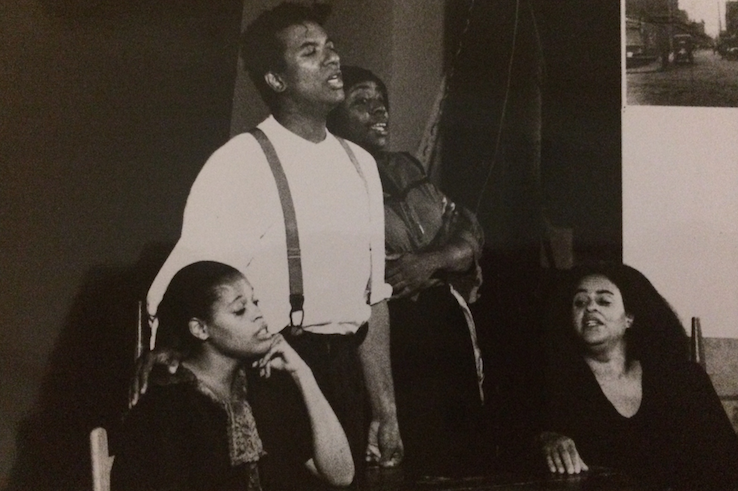 Article by ROOTS Staff | January 6, 2016
In 1976, at the Highlander Center in New Market, TN, a group of Southern artists came together to — as the late Jo Carson put it — “see if we had anything to say to one another.” The outcome, also according to Jo: “We did.”

Forty years later, the artists, activists, and cultural organizers that make up Alternate ROOTS still have a lot to say, dream, and enact with one another. Throughout this year, we celebrate all that we’ve accomplished together over the last four decades, while using our anniversary as a springboard towards the just, sustainable future and world that we are working to create together.

Originally an acronym for “Regional Organization of Theaters South,” ROOTS quickly established itself as a thought leader in the field of community-based arts and the only regional collective of artists committed to social and economic justice. In response to the needs of the growing field of community-based arts, ROOTS evolved to a multidisciplinary member-based and artist-driven organization.

ROOTS’ 40th anniversary marks a distinct moment in the organization’s continual growth and change. We have seen multiple iterations of Arts and Resistance through the years consistently shift to meet the needs of the next generation. Looking to the past, we can see how our diversity fosters a sustainable movement towards justice. At ROOTS, diversity means that we honor both our individual commonalities and our distinctions, and we connect with one another through our shared values as well as through our differences. This hard-won, authentic diversity has made us strong, and will continue to, for the the long run.

Recognizing that genuine systemic change takes time, ROOTS maintains a long-term vision with initiatives that grow through time. Our work is grounded in our Principles of Community Engagement, which come out of our Resources for Social Change (RSC) work. The research and development arm of ROOTS, RSC developed over the course of 20+ years alongside an ever growing and shifting membership base.

In order to actualize these concepts ROOTS as an organization has consciously moved from a place of service into a place of action. In 2013, ROOTS decided to transition to the idea that we are all resources for social change, acknowledging the principles of change as part of the fabric of all our work. This began the path to our Call to Action: Aesthetics in 2014, Transformation in 2015, and now, in 2016, Emergent Organizing.*

As we move into this final year of our Call to Action, we further solidify it by considering the ways Emergent Organizing appears in the work of the organization and members. For ROOTS, Emergent Organizing is a grassroots movement building process where individuals and groups, operating in varying degrees of isolation from one another around a social/political justice issue(s), gather together with other similarly situated efforts, gaining visibility and strength. It is a practice and paradigm that is built on the belief that the work of creating a more just world is already underway; it is happening in communities, on the grassroots level through cultural (and other forms of) organizing across our region and planet. Emergent Organizing is reflected in the saying, often spoken by ROOTers: everything you need is in your own house. Working with what is in our own houses – what we are already doing to make change in our communities – we build power and brings about sustainable transformation. Our 40th Anniversary elevates the Emergent Organizing ROOTS has always been engaged in, while looking to the future.

Throughout this 40th year, ROOTS as an organization will be working within an emergent organizing framework as the foundation for our 40 for 40 strategy. This is a combination membership building, fundraising, and communications initiative that seeks to elevate the good work we’ve done and are doing, while also growing and strengthening ROOTS for all that lies ahead.

As a way to bolster connections among our current members and invite new folks in, we’re inviting ROOTers to hold 40 Rhizomes over the course of the year. Rhizomes are small gatherings where members come together to share their art and work, learn about others’, and build community locally. A Rhizome event can take many shapes: getting together for a small discussion, a ROOTS member dinner or potluck, a workshop, etc. Rhizomes are vital to the long-term sustainability of Alternate ROOTS – they grow and nurture our coalition of artists and cultural workers around the region. We do offer financial support for Rhizomes; you can find the Rhizome Event Application here.

In addition, we’ll be launching a 40 for 40 fundraising campaign, aiming to raise $40,000 in order to support ROOTS’ financial health for decades to come. This will be a community-wide effort, and we urge you to let us know how you want to engage with this effort over the coming months.

Finally, 40 for 40 will guide our communications throughout the year, as we publish 40 pieces of multi media documentation — articles, photo essays, short films, podcasts — within the four themes of: Continuum of Struggle: 40 Years of Change in the South; Individual and Community Transformation; Decolonizing Aesthetics; and Collective Power Building and Partnerships. Recognizing that gathering 40 years of history is a monumental task, we intend for the anniversary year to be an opportunity to continue assembling and consolidating the multiple narratives that tell the story of ROOTS as we move towards building a multi-platform ROOTS Archive.

This 40th year offers us innumerable opportunities to reflect on where we’ve been and imagine new ways of moving into our collective future. We have so many chances to come together throughout this year – ROOTS Weekends in Eatonville, FL in January, at ROOTS’ birthplace, the Highlander Center in June, and a third location (TBD) this fall; ROOTS Week Annual Meeting and Artists Retreat in Arden, NC in August; and in support of the countless performances, exhibitions, organizing efforts that our membership will hold across the region. Please join us in celebrating, gathering, organizing, and building a sustainable and just world!