We are pleased, proud, and excited to announce the incredible artists, culture-bearers, organizers, activists, and scholars who will share their work with us at ROOTS Week under the banner, A Call to Action: Transformation. Within this theme, we’ll be focusing on three issues that are shared among our 2014-15 Partners in Action cohort: Environment & Economy, Immigration/Migration, and Cultural Equity, with an emphasis on #BlackLivesMatter. Each day of ROOTS Week is devoted to our collective exploration of one of these three sub-themes. Throughout the week, we’ll follow this daily rhythm: morning business meetings, late-morning Keynote, afternoon Learning Exchanges, and evening Performances & Films, followed by community dialogue, and followed, still later, by Late Night. Brief descriptions for all Keynote Speakers, Learning Exchanges, Performances and Films can be found below, organized by theme.

Alongside these programmed sessions, the work of our fabulous 2015 Visual Arts Scholars will be exhibited throughout the ROOTS Week grounds. We invite and encourage you to take the time to visit each of these exhibitions. You can get familiar with these seven amazing artists here. There will also be time for Self Organized Spaces, impromptu jam sessions, late night bonfires, quiet walks in the woods, meaningful mealtime conversations, a dip in Lutheridge’s (new and improved!) pool, singing, dancing … we could go on and on. ROOTS Week is what you make of it, and what we make of it together. We can’t wait to see you on the mountain.

Colette Pichon Battle, Esq. is a native of Louisiana, has worked with leaders in the Gulf South toward multi-racial cross regional alliance building around human rights and anti-poverty issues, and currently serves as Director of the Gulf Coast Center for Law & Policy.

This multi-media, interactive Learning Exchange will offer a grounding in the Transition of Appalachia as a basis for exploring the transitions necessary within each of us to envision and enact a better world for all.

This session will use the lens of environmental racism to explore the collaborative events and actions that Gulf South Rising has and is enacting around strategic dates in 2015, demanding a just transition away from extractive industries, discriminatory policies and unjust practices that hinder equitable recovery from disaster and impedes the development of sustainable communities. 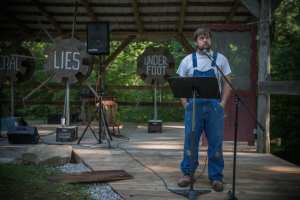 Higher Ground 5: Find a Way is a youth-devised performance that addresses the historical moment the region finds itself in, as the collapse of the 125-year-old coal industry presents not only the opportunity but the necessity to write a different future.

Elements of song, story, spoken word, digital projection and ceremony will be offered from a longer piece originally devised and presented in the woods of Clear Creek in the foothills of the Appalachian Mountains.

Ten years after Hurricane Katrina, this documentary explores the race, class and gender outlines of the reconstruction of New Orleans. The film takes a look, from the grassroots, at systemic changes in housing, education, healthcare and policing.

This session unpacks PA’I Foundation’s mission to preserve and perpetuate Hawaiian cultural traditions for future generations, including the ways the organization lifts up hula, in particular, as a protest art form. 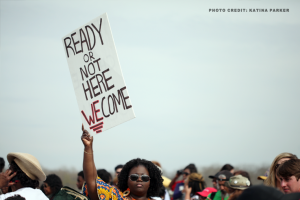 This Learning Exchange combines a discussion, screening and brainstorming session about the role of independent documentation in sustaining social justice movements, with an emphasis on the #BlackLivesMatter movement.

Something to Behold is a performance created from first-voice reflections on ROOTS Fest, held in West Baltimore in 2011. The drama intends to spark critical discourse about how ROOTS will mark its 40th anniversary; continue to support West Baltimore, especially in the context of the current Uprising; and implement more large-scale initiatives aimed at cultural and social equity.

Baltimore: A Moment to a Movement
Produced and Directed by Jordan Flaherty

The media called it a riot, but on the streets of Baltimore it was called an uprising. This short documentary looks beyond police brutality to the oppressive conditions that fueled the mass protests. 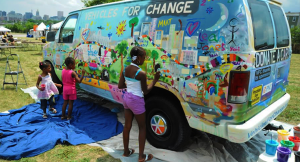 Something to Behold is also a Learning Exchange. See above for a description.

This performance shares the stories of artists and mothers featured in the Black Lives Matter movement who have experienced the loss of their children. The mothers will perform a concert reading of a play they have created as a healing tool.

As the trauma of almost a century of lynching African Americans bleeds into the present, this documentary feature film follows relatives of the perpetrators and victims of lynchings in four communities grappling with how best to acknowledge the victims, repair the damage, and reconcile — all in the midst of heated national discourse about the value of black lives.

Born and raised in Honolulu, Hawai’i, Jeff Chang has written extensively on culture, politics, the arts, and music. He currently serves as the Executive Director of the Institute for Diversity in the Arts at Stanford University. 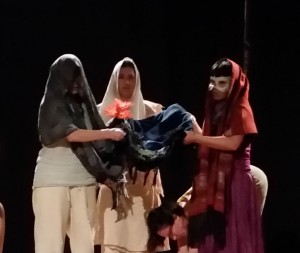 This workshop delves more deeply into the performance, Telares (o el Olvido) / Looms (or, the Forgetting), which tells the story of a small mountain village where the inhabitants, without realizing it, are caught in a struggle between tradition and modernity. It is a story of resistance, in which the characters re-member who they are through ancestral, pre-Hispanic practices.

Led by three ROOTS members who have diverse experiences with immigration and immigrant communities, this workshop seeks to expand the dominant narrative around U.S. immigration.

Sound Community is an artist-coordinated world music and dance space whose goal is to promote community participation in culture-based art forms, especially music and dance. 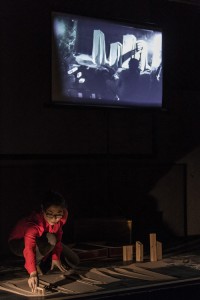 Combining live feed projection of sand drawings and archival film footage, this solo performance tells the true story of two men who were interned in a Japanese American relocation camp during World War II: the artist’s father, an Asian Art historian now suffering from dementia, and the subject of his research, Isamu Noguchi, a half-Japanese-half-American sculptor.

Telares (o el olvido) is also a Learning Exchange. See above for a description.

Are We Teammates? A Journey Into the Heart of My Family
Presented by Arianna Ross

Listen and move as this story takes your body through an insider’s/outsider’s understanding of immigration, identity and family. It begins, for my inner circle, with the question: What does it mean to simply be on Team Human? 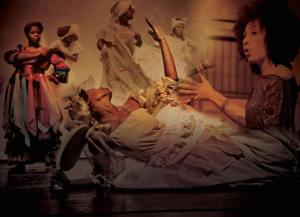 ALIENS, IMMIGRANTS & OTHER EVILDOERS is politically provocative, visually dynamic and hilariously absurd, and it humanizes the demonized “immigrant alien” by putting a human face and heart on immigrants under persecution in the so-called land of the free.

Featuring award-winning poet Sunni Patterson and New Orleans dance and drumming company, Kumbuka African Drum and Dance Collective, GOMELA is a journey that connects the past and the present, highlighting ancient art forms and new artistic expressions that make evident the connection between Africa, Haiti and New Orleans.

The goal of this all-conference session is to offer an analysis and functional framework that connects the issues of race, gender, immigration/migration, class, and other ways that our identities, power dynamics, and privilege, work together to create a structural foundation of oppression. These issues are interconnected and will benefit from taking an intersectional approach to dismantling them. 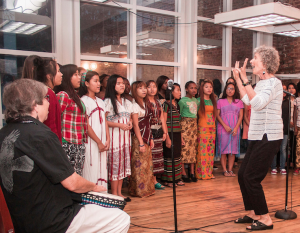 On October 24, 2015, ROOTS will host our inaugural fundraising event — Burlesque, Barbecue and Bourbon — to raise money for programs, projects, and activities. Through this preview, you’ll have a glimpse of what you’ll see in October when you join us for 3BQ. (Please note: this performance will NOT be PG-rated!)