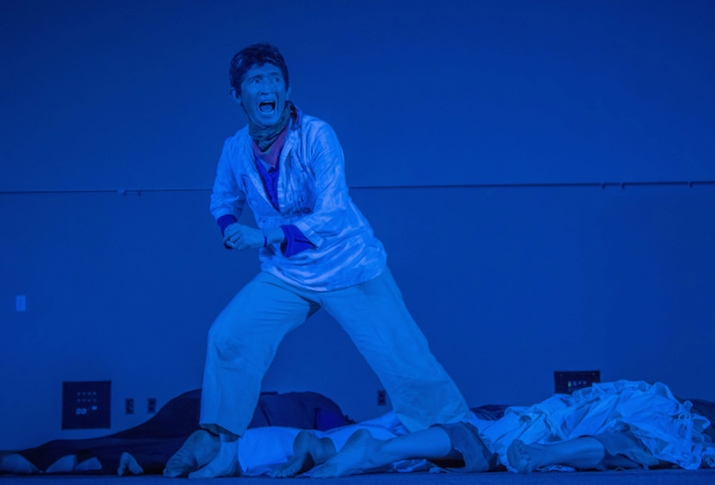 A woman silently gestures to me in the cafeteria, her face partially obscured by a red bandanna. It’s the end of dinnertime at ROOTS Week, Alternate ROOTS Annual Meeting and Artists Retreat. A few others walk slowly throughout the space, motioning to people in a similar way, also wearing bandannas or ski masks. They are members of the all women theater company Mujeres en Ritual Danza-Teatro inviting us to gather for their performance Telares (o el olvido) / Looms (or, the forgetting). Artistic Director Dora Arreola later explains how Mexican indigenous communities gather people for meetings and organize their own safety policing this way, hiding their own identities for protection. In honor of this tradition, the company uses this method to engage audiences with their work.

Telares follows the journey of a person who “just crossed a border and suddenly does not have human rights,” says Arreola.  Spanning centuries, the highly physical and song-infused performance is about “who we are before colonization,” she says.  “One of the effects of violence [of colonization] is that we forget. Trauma. We forget who we are.” Telares is about fighting to remember.

Art and artists play a critical role on the road to a true liberation of society. Art can heal, and inform, as well as help build a larger social vision. Fighting to remember the rich legacies of all peoples despite the trauma of colonization is crucial.  Colonization could only be justified by messages of dehumanization and erasure of certain peoples. That messaging remains even today. By using art to share stories, truth, heritages, and dreams by and of all people, we can break the cycles of our traumatic past.

Each day of the Annual Meeting had a different theme. Friday, August 9th covered  Immigration/Migration, with art, workshops, and talks. Keynote speaker Jeff Chang, co-founder of Culture Strike, remarked on the importance of language in migrant justice work.  The term “immigrant” privileges the laws that create borders, emphasizing the “legal” or “illegal” status of the human being. The term “migrant” centers the body of the person. It is a small but powerful reorientation in language – the human matters more than the policies that divide us. He noted how hundreds of years of imperialism and white supremacy impact how we see each other today. It impacts the language and culture we communicate within, as well as how history itself is retold. 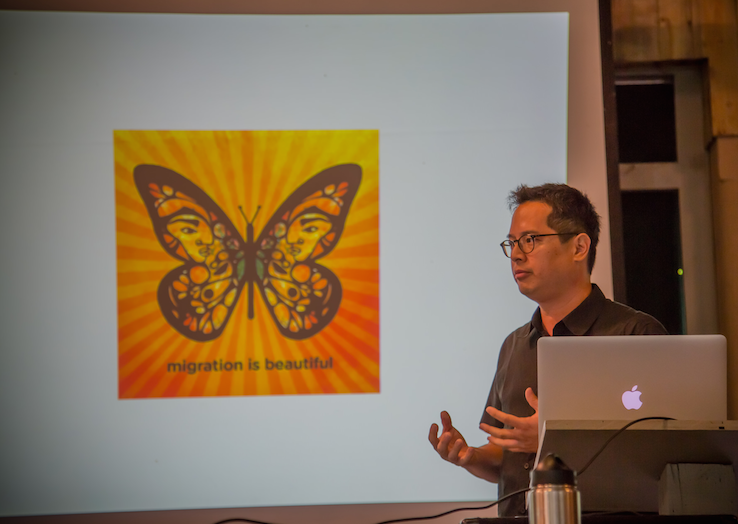 Imperialism and white supremacy also rendered indigenous communities as migrants within their own land. Jessica Clark, a Southeastern Native American Lumbee tribal member and 2015 ROOTS Visual Arts Scholar, remarked, “Someone once said ‘we didn’t cross the border — the border crossed us.’” When she left her Lumbee community in North Carolina, she was shocked to discover how little non-native people knew of native culture. She resolved to make her family and community the subject of her art, to tell larger society that native people are still alive. “You can ignore my people if you want, but when you walk into a gallery, you can’t ignore my work,” she said. She’s right. Her work is large. Some of her paintings stretch across 24 square feet. 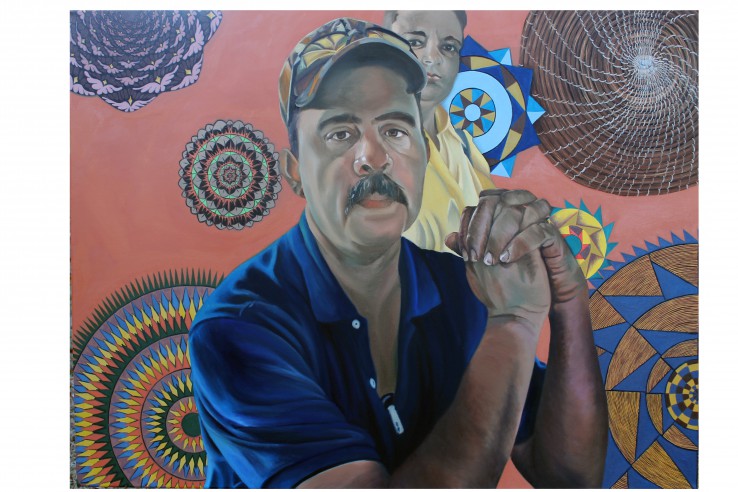 Clark says, in her community people can leave to get the training and degrees they need, but “you come back home.” It is expected you return. To contribute back to one’s home community is an affront to the dominant cultural messaging that dictates you must leave your community behind in pursuit of upward mobility.  Migrating temporarily can also be about returning home with additional resources.

Artist Kimi Maeda combined projection, live sand drawings, and film in Bend, a meditative landscape exploring the impact of her father’s internment as a Japanese-American, as well as the erosion of his memory. Performer José Torres-Tama presented ALIENS, IMMIGRANTS & OTHER EVILDOERS, intermingling his satiric live performance with actual xenophobic commercials of political candidates. At the late night open mic, ROOTS newcomer Sophiyya Nayar performed “Where I Come From,” on the impact of the British Partition of India and Pakistan in 1947. For a period of time, her grandmother awaited word if where she lived was still home for another day, until she was forcibly relocated. As Nayyar moved, she spoke, “Where I come from, there was a border cut by glass, dividing me into who I was and who I had to become.” 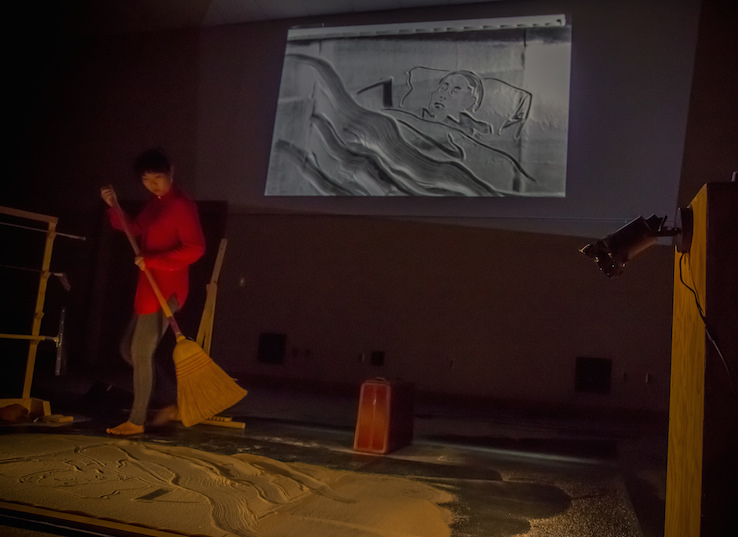 In The Decline and Fall of Empire, Michael Hardt and Antonio Negri write, “Empire can only isolate, divide, and segregate.” In his keynote, Chang identified one of the tools empire uses to separate us: “images of criminality justify its most obscene acts towards us.” If images of criminality justify colonialism and violence, images of liberation and truth-telling could have an opposite effect. Cultural change comes before political change. Cultural strategy informs political strategy. As cultural workers and artists, Chang proposes that if empire divides, “then our job is to commit, connect, and amplify.” We can have conversations about how to transform the broken systems left in place as a result of empire into safe and just communities for everyone. In a world without empire, no one is left behind. 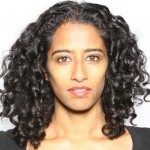 Anu Yadav is a critically acclaimed actress, writer, educator, and producer dedicated to untold stories.  She wrote and performed the solo plays, ‘Capers, and Meena’s Dream and founded Classlines a storytelling project on wealth and poverty. She performed with the Shakespeare Theatre Company, Studio Safdar in Delhi, and Beijing’s National Academy of Dramatic Arts.  Her work was featured in the documentaries Walk with Me and Chocolate City, and multiple media outlets. She was a 2014 Western Arts Alliance ‘Launchpad’ Artist, DC Artist Fellow, Mercersburg Academy Fowle Scholar-in-Residence, and Arts Midwest Spotlight Showcase Artist. She is a graduate of Bryn Mawr College and holds an M.F.A. in Performance from University of Maryland, College Park. She is currently touring Meena’s Dream, working on a play commission with Imagination Stage, partnering with the Institute for Policy Studies as a Catalyst Grant recipient, and will be featured in Roundhouse Theatre’s production of The Who and the What May 2016. www.anuyadav.com